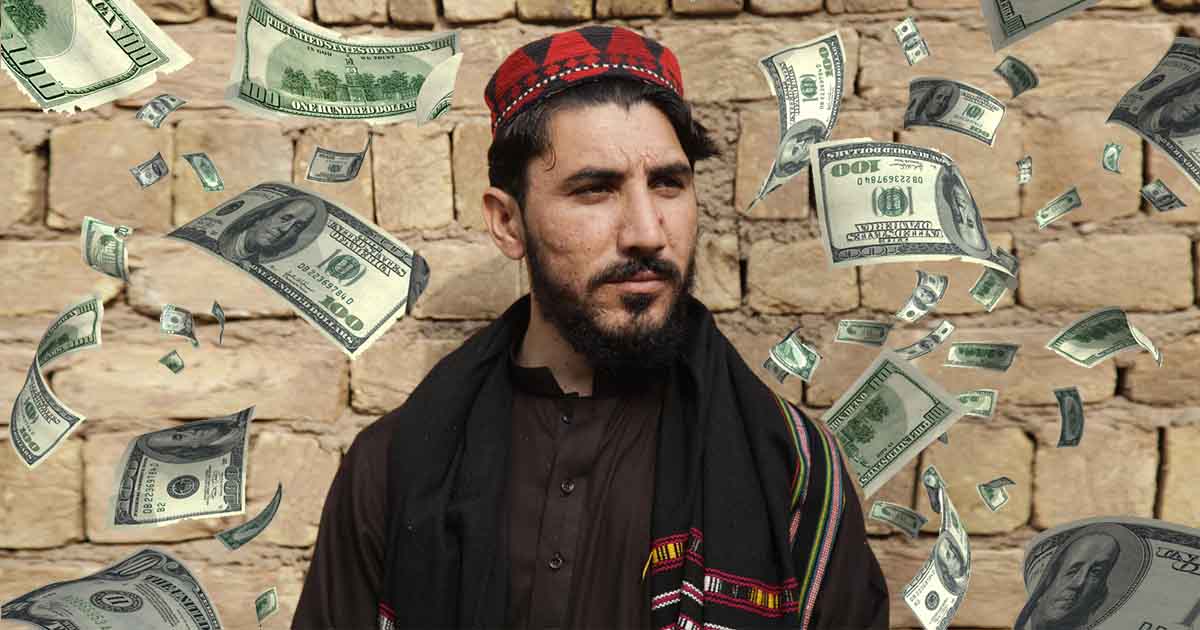 DG ISPR highlighted yesterday in his press briefing that for its very first rally in Islamabad, PTM received funds from RAW in February 2018, and on 22nd March, 2018, RAW again provided funds to stage countrywide protests to release PTM activists. On 8th April 2018, Manzoor Pashteen’s cousin and a close friend visited the Indian consulate in Kandahar, where funds were exchanged.

Coincidentally, or not, the BLA leadership exiled from Balochistan also resides in posh localities of Kandahar. On 8th May, 2018, the Indian consulate in Jalalabad filled PTM’s anti-state kitty with US dollars, which was used to stage a protest in Torkham. Arman Loni’s death entered a new phase of funding, and on 31st March, 2019, PTM collected money from NDS to stage Arman Loni’s funeral and a large scale protest rally in Peshawar.

Qazi Mir Afghan Safi is the name that has emerged in connection with PTM’s money trail, contact with money change and assistance in channeling the funds through Hawala/Hundi. Safi is an MNA from Kabul and the former Head of Money Exchange Union. Mohammad Ismail Yoon, the owner of Zhwandoon TV, who also supported the Baloch insurgents, took the responsibility of providing PTM extensive media coverage and inviting the PTM leadership for talk shows and interviews.

Nasser Zadran has been identified as the fund collector in Gulf, who collects money from Pashtun laborers and adds it to the RAW kitty and then, this fund is transferred to PTM through Afghanistan. DG ISPR General Asif Ghafoor made a series of astonishing revelations during a press briefing yesterday, confirming the assertions of several prominent political analysts and geo-strategic experts with regards to the foreign funding received by the Pashtun Tahaffuz Movement (PTM).

DG ISPR highlighted that PTM is collecting funds from the intelligence wings of the Indian and Afghan Military, namely the Research and Analysis Wing (RAW) and the National Directorate of Security (NDS). DG ISPR highlighted that PTM is in possession of a large amount of foreign funds, a number that is much greater than the figures that have claimed to have collected from Pashtun donors across the world. “Tell us how much money you received from the NDS to run your campaign? How much money did RAW provide you to stage your first dharna in Islamabad?”

DG ISPR raised the same criticism that was raised by Prime Minister Imran Khan in Wana last week. Both leaders accepted that the demands of the local people are genuine, but PTM is a foreign-funded organization that is exploiting these genuine demands to raise a wave of hatred and contempt against the state. “Your time is up”, asserted DG ISPR, after breaking down an extensive money trail that the Pakistani intelligence agencies have gathered over the years.

Jan Achakzai, renowned geo-strategist and political analyst explained to Global Village Space that the funding and money trail of PTM is strikingly different than the funding flowing to other non-state actors. Security agencies are confident that PTM’s funding chain originates from Afghanistan and enters Pakistan through the route of Chaman, for which nationalist groups are used as a conduit.

Afghanistan, like other regional parties involved in promoting unrest in Pakistan, has a long history of supporting and funding anti-state elements and organizations. In the past, Kabul has been implicated in also providing financial support to the MQM, and the security institutions have compiled lengthy chronological evidence that validates this.

Another method that is utilized by the PTM leadership to obtain funds is through the merchants transporting fruits and vegetables from marketplaces, where the money is handed over to them by hostile agencies. Jan Achakzai explained, “The security agencies have identified a PTM leader, referred to as NT, who is responsible for receiving all these proceeds and funds and handing them over to another prominent sponsor of PTM, known by the code name SK. Both NT and SK belong to the Karachi chapter of the Pashtun Tahaffuz Movement.”

The third route of the money trail is a popular Urdu-speaking father, who is funding PTM through Australia. This unnamed father operates out of Karachi, and his network by apprehended by the premier security agency but succeeded in securing their release. Jan Achakzai explains that according to the intelligence apparatus, the funding of PTM is allegedly largely handled by PTM MNA and central leader Ali Wazir, who is responsible for collecting incoming funds and distributing them as the need arises.

PTM MNA Mohsin Dawar is the brains behind the movement, responsible for spotting, sourcing, liaising and interacting with other hostile agencies to initiate anti-state activities, speeches and rallies. He stated, “PTM is collecting a yearly funding of rupees 2 billion a year, however, additional grants have also been allocated when the need arises.” Jan Achakzai revealed that Manzoor Pashteen, the leader of the movement, has been provided with a bombproof V8 by the NDS, especially to ensure his safety during visits to Karachi, given the sensitive nature of security threats perceived for Pashteen in the city of lights.

It is important to note that PTM has also managed to generate a small but steady stream of income from wealthy individuals and investors hailing from FATA in the Gulf region, including Dubai. Jan Achakzai stressed that these individuals and FATA diaspora residing in the Gulf were also used to fill in the coffers of the Tehreek-e-Taliban Pakistan. These individuals provide “seed money” and while the exact amount of the donations is unclear, Jan Achakzai notes, “The donations are substantial enough to maintain the manpower and activities of the PTM leadership”.

How is Pashtun Tahaffuz Connected with Lar-o-Bar?

In his extensive and insightful treatise on the agendas and funding of PTM, political analyst Dr. Moeed Pirzada had earlier explained that PTM appears to interlocking the identity of Pakistan’s Pashtuns with the Afghan Pashtun, by reviving an old ANP era slogan, Lar o Bar Yo Afghan (Up and down, we are one Afghan nation). DG ISPR also raised the same question from the PTM leadership, “what do you mean by Lar-o-Bar? What exactly is the purpose of raising this anti-state slogan and regarding Pakistan’s territory as land of the Afghans?

Dr. Pirzada observed that while PTM cannot succeed against the strength of the Pakistani nationhood, “there is much to suggest that something like that is being conceived or promoted under the garb of a rights movement”. Dr. Pirzada further comments that when we take into account Manzoor Pashteen’s social media agendas and discourse, it is evident that “he is far less interested in finding solutions to the local problems and far more interested in inciting strong emotions of victimhood around an ethnicity and thus hate towards perceived aggressors.”

Geostrategic expert Jan Achakzai explains the connection between PTM and Afghan agendas by explaining the mediums of PTM’s tasking and agenda-driving. He concludes, “Tasking, agenda and line is jointly given by NDS Station Chief and RAW’s Station Chief in Kandahar, in live with directives received from NDS boss and RAW’s second in command chief sitting Kabul”.

Read more: Why ‘freedom of speech’ doesn’t exist for PTM in Pakistan?

DG ISPR raised another important question, “Why did Mashal Khan Takkar come to Kabul from Canada?” Mashal Khan Takkar is the founder of the Great Afghanistan Movement, the Editor in Chief of The Voice Times and the brain behind a plethora of literature that attacks Pakistan and its security agencies, and criticizes the birth of Pakistan, regarding it as a territory that belongs to the Afghans.

PTM leader, MNA Mohsin Dawar, first emerged in the limelight when the Afghan authorities refused to hand over the dead body of martyred SP Tahir Khan Dawar to anyone else on account of the fact that none other than MNA Dawar embodied an “authentic Pashtun”.

In a blatant disregard to DG ISPR’s warning against treasonous slurs and anti-state activities, MNA Dawar issued a strongly worded tweet, “Today we saw the real worth of our democracy, as a military officer challenged those demands of PTM that were endorsed by a committee of the Senate. We witnessed a hybrid martial law today, as the Govt is nowhere to be seen & a soldier became its spokesperson.”

MNA Mohsin Dawar conveniently forgets that the questions raised by DG ISPR were concerns voiced by prominent analyst across the country, and the country’s premier Imran Khan himself, who had publically warned the people of Wana against such malicious organizations and their foreign-funded agendas.

Highly placed sources reveal that FIRs against the PTM leadership are under process, and the security agencies have compiled sufficient evidence to challenge their activities in a court of law, alongside the money trail of their funding received from NDS and RAW.

US: COVID-19 testing for asymptomatic people not neccessary after exposure

US places China Pakistan among countries of ‘particular concern’