Jan Achakzai, Chairman of the Centre for Geo-Politics and Baluchistan, reveals that the malignant propaganda of flying Baluchistan banners across the cricket stadium in Leeds on Saturday is another RAW-funded stunt to malign Pakistan’s security agencies. 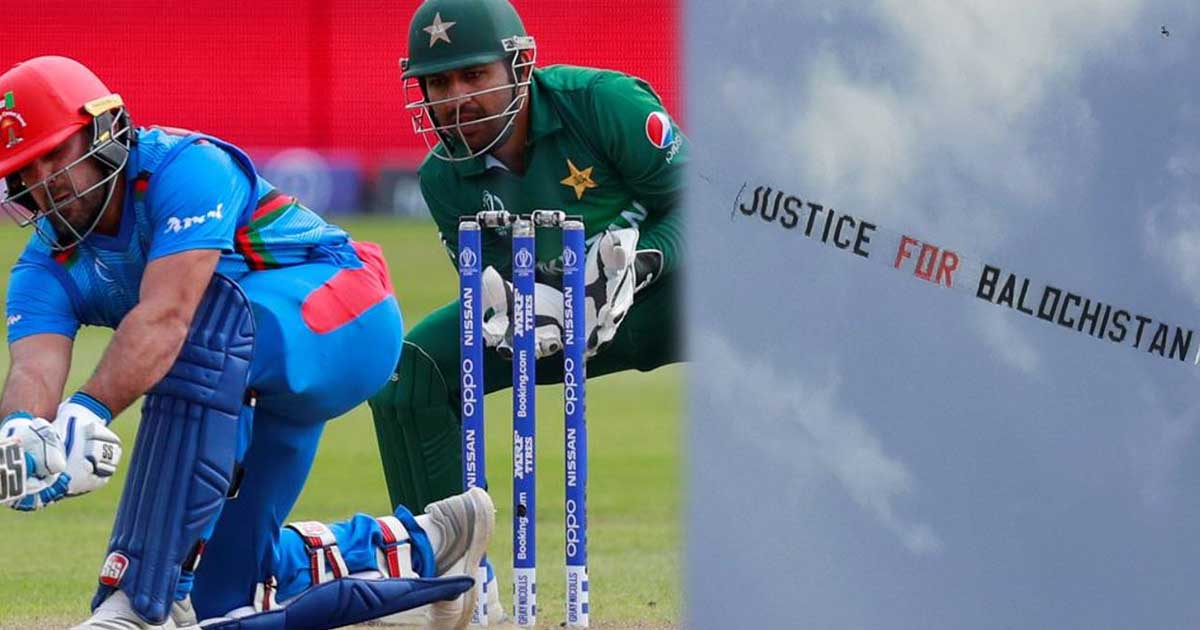 The Pakistan-Afghanistan match in Headingly, Leeds on Saturday became a victim of political controversy when a plane showcasing the message “Justice for Baluchistan” flew across the venue, stirring up clashes between fans from the two countries.

This must be investigated & Pakistan govt shud take this up with British govt. It shouldnt only be taken up with ICC – it is already more of an Indian Cricket Council. This campaign was targetted at Pakistan in British air space – British authorities should be questioned about it pic.twitter.com/h5B8od3OnQ— Shiffa Z. Yousafzai (@Shiffa_ZY) June 29, 2019

ICC Source: Fight broke out b/w Pak&Afghan fans in Leeds because a plane was flown which had Balochistan slogans. Apparently it was an unauthorised plane that flew over the stadium&political messages were visible. Leeds air traffic will investigate. (Pic courtesy: WorldBalochOrg) pic.twitter.com/cu0CyZ0w0U— ANI (@ANI) June 29, 2019

Baluchistan is Pakistan’s largest province, where the military is carrying out counterterrorism operations to eliminate instruments of Indian proxy warfare and terrorist organizations. The Foreign Ministry of Pakistan condemned this act and launched a strong diplomatic initiative against this malicious propaganda.

A statement issued by the Foreign Office stated, “The flying of anti-Pakistan banners, unruly conduct of certain group of spectators towards Pakistan team players, and scuffles during the Pakistan-Afghanistan World Cup cricket match are a matter of deep concern.” The statement added, “Use of sports venues for such malicious propaganda is unacceptable. We expect all relevant authorities, both sports and law enforcement, to thoroughly investigate the matter and bring those responsible to account. The matter is also being taken up through diplomatic channels.”

These Afghani’s need to be thrown out of the UK. Disgusting behaviour with Pakistan Cricket Team fans. #CWC19 #PAKvAFG pic.twitter.com/NbbxAbZfye

The banner triggered unrest and media reports revealed that “violent clashes” erupted between the supports of Pakistan and Afghanistan, causing the Police to intervene. AFP reported that the clashes erupted in the stands at the beginning of the match, urging the security personnel to intervene.

Stupidity at its peak!

Two people have been arrested by the police and multiple footages of the clashes are circulating across social media.

A few Afghan spectators tried to assault the Pakistani duo that won the match for their team. In this picture, one of them is nabbed by the ICC security official. Shameful! #SoreLosers #PAKvAFG #CWC19 pic.twitter.com/vO1ePMtDZz— Ali Salman Alvi (@alisalmanalvi) June 29, 2019

Pakistan arrived at the venue with the agenda to increase its chances of playing in the semifinals of the Cricket World Cup Championship 2019. While the atmosphere was already tense, the airplane carrying messages of “Justice for Baluchistan” and “Help end disappearances in Pakistan” certainly made matters worse.

The International Cricket Council announced to the press that the “aircraft was unauthorized” and the incident will be investigated by the Leeds air traffic authorities.

We are aware of some scuffles among a minority of fans and are currently working with the venue security team and the local police force, West Yorkshire Police, to ensure there are no further incidents.

The ICC spokesperson expressed, “We do not condone any sort of political messages at the ICC Men’s Cricket World Cup and will work with West Yorkshire police to deal with and understand why this has happened and to ensure it does not repeat.” However, the Leeds Air Control denied any knowledge of the incident, and informed the media that it had not received any instructions regarding denying the plane permission to fly the banners over the venue of the Pak-Afghan match.

The ICC announced that it intends to take action against the fans who got involved in the “scuffles” and clashes before the match. The ICC spokesperson commented, “We are aware of some scuffles among a minority of fans and are currently working with the venue security team and the local police force, West Yorkshire Police, to ensure there are no further incidents.” He added, “We do not condone this type of behavior, and will take appropriate action against any anti-social behavior that spoils the enjoyment for the fans.”

Jan Achakzai, Chairman of the Centre for Geo-Politics and Baluchistan, observed that the Baluchistan banners are simply a manifestation of the advertising efforts undertaken by individuals and entities with vested interests in stirring unrest in Pakistan. Achakzai noted, “Baluchistan banners” display by an aircraft in Birmingham cricket stadium is just a small manifestation of massive advertising campaign covering big commercial billboards, double tracker buses, carts, and cycles mounted posters. The cost of this campaign runs in millions of pounds.”

The Baloch geo-strategist added, “Few individuals on state benefits could not afford to pay for this level of targeted publicity for fringe separatists, terrorists leaders.” Explaining the Indian efforts and agendas behind staging such political propaganda, Jan Achakzai mentioned, “The new RAW chief who took over last week is the hawk who bank rolled these proxy leaders in Europe. While being the head of operations in RAW, he commissioned millions of dollars for the propaganda campaign in Europe particularly in Geneva, London, Paris and Berlin. The aim was to target Pakistani state and the Army.”

The Baloch analyst, with vast expertise on Baluchistan’s ethnic insurgency further added, “According to one estimate, so far the RAW has paid nearly $2 billion dollars over the last 10 years to finance insurgency in Baluchistan, bribed its leaders in exile, paid salaries for foot soldiers and bought off small weapons and ammunition including ARDX in Afghan black market.” Achakzai added, “Through an open bidding process every soft target hit by militants would incur hefty amount by the RAW handlers setting across Afghanistan and Iran’s Chabahar.”

RAW’s Network in the West

Jan Achakzai explained that India’s premier spy agency, RAW, has a significant network across Europe and India to sponsor terror groups and lobby support for Baloch militants, MQM’s London chapter, and most recently PTM has also been added to the list. Achakzai claimed, “Europe and the US has now increased the focus of the RAW’s diplomatic lobbying: it is sponsoring networks and lobbying firms not only for Baloch militants but also for MQM-London and now PTM to hook up with influential policy makers, politicians, MPs and congressmen/women.”

Pakistan’s Foreign Office has raised the issue with the UK, but for too long London has been abused by Pakistani separatists, terrorists and money launderers with or without the connections of the UK government and the system.

Explaining the agenda behind the Baluchistan banners, Achakzai noted, “The latest publicity stunt in UK is part of these efforts to raise build and promote anti-Pakistan and anti-Army

narrative. Otherwise, millions of Kashmiris have disappeared in the Indian-Occupied Kashmir and other parts of India, neither one liner nor a pamphlet got the fact mentioned in Europe.” Jan Achakzai explained India’s anti-Pakistan propaganda circulating across the United Kingdom, and its impact on Pakistan’s bilateral relations with the UK. He observed, “Use of the United Kingdom’s soil is also very intriguing: Pakistan is directly contributing to the UK’s national security. The activities of the RAW in London deliver a very wrong message for Pakistan’s massive collaboration with the UK in Intel gathering, data sharing, even eavesdropping of Pakistani expatriate community for national security of mainland (the UK).”

The Baloch geo-strategist added, “Pakistan’s Foreign Office has raised the issue with the UK, but for too long London has been abused by Pakistani separatists, terrorists and money launderers with or without the connections of the UK government and the system.”

“Pakistan’s national security encompasses all other considerations and this is the time to have a candid discussion with the UK authorities. Otherwise, Islamabad will be within its right to revisit one-sided critical cooperation in security arena which will be a big loss for bilateral relations of the two countries”, concluded Jan Achakzai.

US ready for talks with Taliban – Asif Haroon Raja