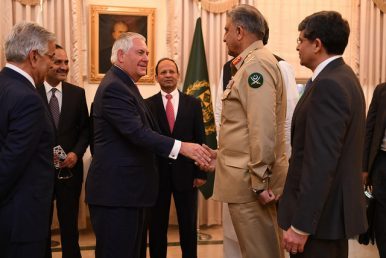 Over the past year, Pakistan has faced immense challenges in its dealings with the Trump Administration. The Americans incapacity to accomplish their desired objectives in Afghanistan and transformation in the global politics influenced negatively Pakistan-United States strategic partnership. The mantra of ‘do-more’, unsubstantial accusations, and above all intimidations frustrate Pakistanis.

Eventually, Islamabad pronounced ‘no-more’. Indeed, President Donald Trump and his cohorts are not prepared for such a diplomatic snub. President Trump’s recent repulsive tweet alarmed the Pakistani nation. On January 1, 2018, he tweeted: “The United States has foolishly given Pakistan more than $33b in aid over the last 15 years, and they have given us nothing but lies and deceit, thinking of our leaders as fools.

Despite the recent upsurge in airstrikes and increase in American soldiers, Afghan Taliban’s insurgency is intact and IS has increasing its presence in Afghanistan.

They give safe haven to the terrorists we hunt in Afghanistan, with little help. No more!” Ironically, President Trump failed to make distinction between aid and coalition support fund. Pakistan received fund from the United State as a reimbursement of money which former spent for operations in support of the coalition for regional peace.

Read more: Is Pakistan ready to fight a Hybrid war?

The Government of Pakistan candidly responded Trump’s blatant belligerence. Immediacy, the Foreign Office summoned United States Ambassador David Hale and lodged its protest against Trump’s tweet. Foreign Minister made a befitting rejoinder: “We have already told the US that we will not do more, so Trump’s ‘no more’ does not hold any importance,” He added: “Pakistan is ready to publicly provide every detail of the US aid that it has received.”

Defense Minister Khurram Dastagir Khan reminded Americans: “Pakistan as anti-terror ally has given free to US: land & air communication, military bases & intelligence cooperation that decimated Al-Qaeda over last 16 years, but they have given us nothing but invective & mistrust. They overlook cross-border safe havens of terrorists who murder Pakistanis.”

Pakistan is a key regional ally of China and also improving its relations with Russia. Perhaps, Islamabad’s strategic partnership with Beijing and strategic understanding with Moscow, especially on Afghanistan crisis is not acceptable to Washington.

These declarations marked seven decades strategic partnership is hastily drifting-apart. Nevertheless, the appropriate response is that Government of Pakistan ought to release all the details of the funds and also share the cost, which Pakistan bear in the United States war on terrorism.

The increasing complexity in Pakistan and United States relations is natural. Both states have divergent regional and international outlook. Today, the Americans are determined to validate India’s Great Power stature in the South Asian strategic environment. The National Security Strategy of the United States of America 2017 stated: “We welcome India’s emergence as a leading global power and stronger strategic and defense partner.”

It also pointed out: “We will deepen our strategic partnership with India and support its leadership role in the Indian Ocean security and throughout the broader region.” This resolute unwaveringly challenges Pakistan’s struggle for sovereign equality in the region. Washington’s political and military assistance to New Delhi without taking into consideration Pakistan’s national security obliges Islamabad to realign itself with other Great powers.

In case of Afghanistan both Islamabad and Washington have identical agenda to restore peace and stability in the country. But they have divergence over the peace building modalities. The Trump Administration is determined to establish the writ of President Ashraf Ghani led unity government in Afghanistan without the involvement of Afghan Taliban. Indeed, this will translate into American armed forces military victory. Whereas; Islamabad is convinced that without the involvement of Afghan Taliban peace in Afghanistan is an unrealistic stratagem.

Trump Administration has been intimidating Pakistan to assist it materializing its agenda in Afghanistan. On August 21, 2017, President Trump arrogantly stated: “We can no longer be silent about Pakistan’s safe havens for terrorist organizations, the Taliban, and other groups that pose a threat to the region and beyond.

Pakistan has much to gain from partnering with our effort in Afghanistan. It has much to lose by continuing to harbor criminals and terrorists.” On December 21, 2017, during his Afghanistan visit Vice President Mike Pence concurred the threat: “President Trump has put Pakistan on notice.” Consequently, President Trump withheld $255 million in FY 2016 foreign military financing to Pakistan.

Washington’s political and military assistance to New Delhi without taking into consideration Pakistan’s national security obliges Islamabad to realign itself with other Great powers.

Internationally, the United States is scared of resurgent Russia and China’s rise as an economic and military power. Trump’s National Security Strategy 2017 document pointed out: “China and Russia challenge American power, influence, and interests, attempting to erode American security and prosperity.” It added: “China and Russia are developing advanced weapons and capabilities that could threaten our critical infrastructure and our command and control architecture.”

Pakistan is a key regional ally of China and also improving its relations with Russia. Perhaps, Islamabad’s strategic partnership with Beijing and strategic understanding with Moscow, especially on Afghanistan crisis is not acceptable to Washington. To conclude, President Trump’s frustration constituents are numerous. His domestic initiatives lack dividends. His foreign and strategic policy rating is disgraceful.

He has not get much success in Syria, Iraq and Iran. His Jerusalem strategy has backfired. Despite the recent upsurge in airstrikes and increase in American soldiers, Afghan Taliban’s insurgency is intact and IS has increasing its presence in Afghanistan. He fails to change the behaviour of North Korean Regime. Thus, he is formally scapegoating Pakistan for domestic political utilisation and international strategic consumption.

Why is BJP storing weapons in Southern India?