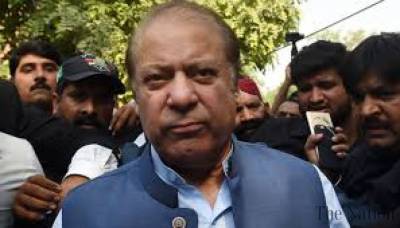 The Punjab home department on Saturday has granted permission to shift incarcerated former premier Nawaz Sharif to Lahore’s Services Hospital in keeping with doctors’ recommendations. The provincial home department has sent a notification to the authorities of Kot Lakhpat jail asking them to shift Nawaz to Lahore’s Services Hospital, sources said.

According to the notification, Sharif will remain in the hospital until his medical tests are carried out. The home department stressed that “foolproof security arrangements be made during his (Sharif’s) shifting to the hospital and his subsequent stay”. The superintendent of Kot Lakhpat jail has been ordered to ensure that Sharif is shifted back to prison once the requisite medical examination is complete.

Nawaz Sharif, 69, was taken to the Punjab Institute of Cardiology (PIC) Lahore from Kot Lakhpat Jail in high security. He was discharged from hospital and taken back to jail following medical tests.

A three-member medical board, comprising principal professor Mehmood Ayaz, Professor Sajid Nisar, and Professor Kamran Cheema, will carry out a medical examination of Sharif. Sharif is serving seven-year imprisonment at Kot Lakhpat after he was convicted by an accountability court in the Al-Aziza Steel Mills case.

A medical board which had been constituted to examine Nawaz Sharif made its recommendation to shift the convicted politician to a hospital for treatment on Friday, 1st February. A board of six doctors had examined Sharif at Kot Lakhpat Jail on January 30th. The Pakistan Muslim League Nawaz (PML-N) leader’s personal physician was also present during the examination.

Read more: Nawaz should be shifted to hospital: Medical board

Nawaz Sharif had complained of chest pain a few days ago, after which his medical tests were carried out. The tests had indicated that Sharif suffers from cardiac issues, sources said. Nawaz Sharif, in his premiership in 2016, after the Panama papers scandal came out– which led to his subsequent imprisonment– went to London for extensive treatment and later an open heart surgery at a private clinic. Nawaz Sharif has also had a by-pass in 2011, which led to further cardiac complications.

On Tuesday, 29th Jan, Nawaz Sharif was rushed to a hospital after he complained of heart-related complications. Nawaz Sharif, 69, was taken to the Punjab Institute of Cardiology (PIC) Lahore from Kot Lakhpat Jail in high security. He was discharged from hospital and taken back to jail following medical tests.

“According to Mr. Sharif’s medical tests (conducted on Tuesday), his condition is not serious. But, he needs aggressive medication and regular medical follow-ups to avoid cardiac complications,” a senior doctor told a local media outlet. He said Nawaz Sharif’s angiography might be conducted. However, Nawaz Sharif’s cardiologist Adnan Khan termed his condition as “very serious” and said he should be shifted to the hospital without any delay.

Previous articleAlmost half of Americans have heart disease: study
Next articleThe History of Online Gambling and Internet Casinos

18 September 2021
Previous articleAlmost half of Americans have heart disease: study
Next articleThe History of Online Gambling and Internet Casinos

Its all over for Khadim Rizvi: Will he be tried under Art 6?

Why DPO Gondal had to be transferred at 1 am: asks CJP

Why Pakistani students are committing suicide?