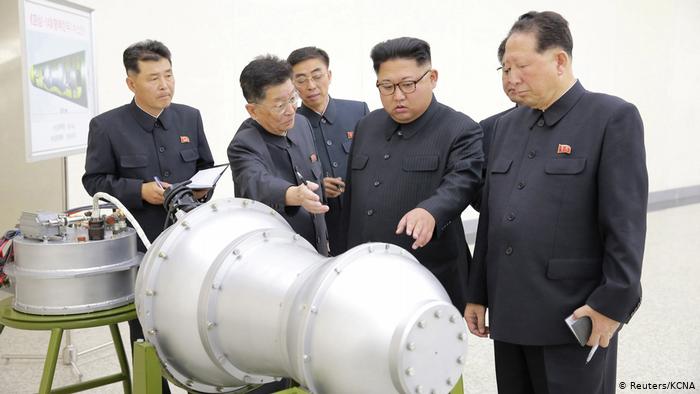 Pyongyang has successfully tested a Hydrogen Bomb today raising the current crisis many notches up the escalation ladder. The state television has said that the bomb was designed to be mounted on its delivery vehicle in Inter-Continental Ballistic Missile (ICBM). The news was announced by DPRK’S famous anchor, Ri Chun-hee.

The announcement came hours after a man-made tremor was detected. The tremor struck within a kilometer of the site of a magnitude-5.3 “nuclear explosion” from September last year, according to the United States Geological Survey (USGS). Within 10 years, the reclusive country has increased the power of its nuclear tests from 4.3 to 6.3 magnitude.

As Japan and South Korea, in concert with the US mull a response, options are drying up as the threat to US and ROK mainland is credible beyond doubt.

“I have already instructed the related ministries to collect and analyze intelligence, to keep the people of Japan informed appropriately, as well as to liaise with the related nations such as the US, South Korea, China, and Russia,” said Japanese Prime Minister Shinzo Abe.

“If confirmed as a nuclear test, this act would indicate that the DPRK’s nuclear program is advancing rapidly,” Lassina Zerbo, executive secretary of the Comprehensive Nuclear-Test-Ban Treaty Organization, has said in a statement.

Kim’s threats to the US territory of Guam already proved credible when the IRBM flew over Japan in its direction. DPRK has time and again claimed that it can wreak havoc in South Korean and US cities, for it has the ability to nuke them.

If the world was struck by the brazen overflight of the IRBM last week, the 6th nuclear test on part of Kim spells trouble for the region and beyond in more ways than one. A detailed statement released by the Nuclear Weapons Institute shows that the test was done in a bid to enhance the credibility of threats that Kim has been dishing out. “The H-bomb test was carried out to examine and confirm the accuracy and credibility of the power control technology and internal structural design newly introduced into manufacturing H-bomb to be placed at the payload of the ICBM,” the statement read.

Read more:The US territory of Guam is the next target; says Pyongyang

Kim’s threats to the US territory of Guam already proved credible when the IRBM flew over Japan in its direction. DPRK has time and again claimed that it can wreak havoc in South Korean and US cities, for it has the ability to nuke them. The tensions have risen after Trump launched a tirade against Kim, threatening him of Fire and Fury. The fiery young Kim seems undeterred. Trump’s last tweet on the matter was rather dangerous, for he said that talks are useless. He tweeted:“The U.S. has been talking to North Korea, and paying them extortion money, for 25 years. Talking is not the answer!”

Today’s statement further read:”The perfect success in the test of the H-bomb for ICBM clearly proved that the Juche-based nukes of the DPRK have been put on a highly precise basis, the creditability of the operation of the nuclear warhead is fully guaranteed and the design and production technology of nuclear weapons of the DPRK has been put on a high level to adjust its destructive power in consideration of the targets and purposes.It also marked a very significant occasion in attaining the final goal of completing the state nuclear force.”

Conventional operations against North Korea will definitely be responded to with a strategic weapon, resulting in the sure short destruction of Seoul or any US city. The US can therefore not risk that by any means. This increases the chance of them resorting to a first counterforce strike.

Trump finds himself in a tricky situation. Kim has shown the proclivity to take risks and also the fact that his country’s nuclear forces are “locked and loaded”. DPRK has time and again expressed the intent to hit US cities either in shape of a preemptive strike or a surprise attack. It has also kept things ambiguous in regards the threshold and the kind of threat that would merit a nuclear attack. But by the looks of things, despite colossal risks, DPRK may even respond to a conventional attack by a nuclear one. The successful test has given credibility to this claim.

If anything, Trump’s Twitter engagements have given just the wrong signals which shouldn’t have been given. Kim has the ability at his disposal and the desire to press the button; the ability has been proven today. Therefore cities in the US mainland and those in South Korea are held, hostage. With DPRK’s threat credible, the US may find counterforce strikes more alluring, for it can outlaw the capacity of Kim to annihilate cities in the US, Japan, and South Korea. Here it is important to understand that Kim knows that nuclear weapons are the be-all and end-all for his regime; he cannot lose them at all; Iraq and Libya are examples that he will have in mind. Conventional operations against North Korea will definitely be responded to with a strategic weapon, resulting in the sure short destruction of Seoul or any US city. The US can therefore not risk that by any means. This increases the chance of them resorting to a first counterforce strike.

The US has to decide if wants to accept the nuclearization of DPRK or risk the destruction of its cities in a bit to stop it.

This puts Kim under the predicament, popularly known as the ‘use or lose ‘ dilemma. Kim cannot lose them; he can still use them and hope to get away.

This danger has not dawned upon Trump and his allies as they think that weaker states can wilt under mounting threats in spite of having the  “absolute weapon”. Small states go nuclear in order to obviate threats; they are more likely to use nukes when threats mount. The problem is that DPRK will not and cannot launch counterforce strikes; their best bet will be at the cost of innocent lives. Trump’s Twitter diatribes are fast-leading towards deterrence failure. Today’s test, coupled with increasing threats from the US and its allies may compel a “rational” Kim to draw first blood. As it stands, DPRK has the ability and the will to strike the US and the ROK; the only thing standing between Kim’s will and the actual strike is the response that his foes give to today’s development. Provocation will edge the world closer to witnessing the first nuclear exchange in warfare. The US has to decide if wants to accept the nuclearization of DPRK or risk the destruction of its cities in a bit to stop it.

Previous articleTrumpistan! The Trumpeter’s policy on Afghanistan is really their Policy on China.
Next articleKunming: China’s South Eurasian Connectivity Hub

No president has helped Israel more than I have, says Trump