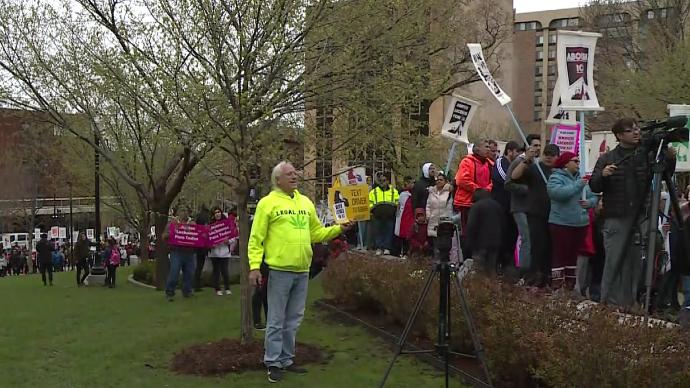 Former prime minister Nawaz Sharif is traveling at a very brisk pace on the Grand Trunk Road. Day 2 of his home going rally has been different, for yesterday his cavalcade moved at a snail’s pace. As of this writing, the entourage is on the cusp of Jhelum, which means that it has traveled some 80 odd kilometers in a few hours.Media reports and footages depict that the caravan has been welcomed by a paltry cohort of people. Reportedly, Nawaz Sharif will not make a speech at Jhelum due to the presence of thin support.

Analysts have expressed surprise while opponents are delighted on the lack of support on the Grand Trunk Road, which is, by all means, a fiefdom of the PML-N.

May be the thin presence of PMLN supporters on the 2nd day of the GTroad rally has made the NS motorcade rush to Lahore.
— Ansar Abbasi (@AnsarAAbbasi) August 10, 2017

PML-N leaders had earlier in the day asserted that the crowd would not allow Nawaz Sharif to even reach Jhelum by the end of the day. The fact that Nawaz is traversing at a rapid pace has automatically precluded the notions of massive gatherings along the way.

According to a few sources of the ruling party, security threats have led to this fast-paced journey. The argument appears weak because some representatives of the league are alluding towards a colossal reception in Gujranwala.

Though one can expect the crowd to build up later in the evening, the lackluster response throughout the day is a cause of concern for the ruling party. The supporters need to turn up in large numbers if the rally is to achieve its intended objective.

I am the victim

Nawaz Sharif briefly spoke to a small crowd at Sohawa today and reiterated that 5 people cannot disparage the mandate given to him by millions of people. The PML-N and its deposed leader are trying to galvanize support by highlighting that Iqama and not Panama became the cause of his disqualification. Pamphlets with pictures of Nawaz’s Iqama were distributed to the supporters yesterday. Nawaz also implored his supporters to fight for the protection of their mandate. In other words, it could be considered an incitement against the apex court.

Foreign minister Khawaja Asif tweeted pictures from a rally held in Chittagong Bangladesh last year. All this doesn’t exude confidence on part of the N League. Only a sudden surge in diehards supporters can present some pretty optics for the ruling party.

Commentators are of the opinion that the rally on the GT road was not a prudent idea. If anything, the idea has backfired till now; the impact of the message will be felt only if a sizeable crowd can turn up as the rally reaches its culmination point in Lahore.

Read more: Nawaz Sharif’s political march – Is it that political?

The opposition can take much heart from the proceedings of the day so far. PML-N has been under fire for allegedly using images of Mumtaz Qadri’s funeral to show the responsiveness of people for Nawaz Sharif. Panic is conspicuous when supporters perched in a responsible role are caught doctoring images. Foreign minister Khawaja Asif tweeted pictures from a rally held in Chittagong Bangladesh last year. All this doesn’t exude confidence on part of the N League. Only a sudden surge in diehards supporters can present some pretty optics for the ruling party.

Is Government Trying To Negotiate With Maulana Fazlur Rehman?