Nawaz Sharif’s political march – Is it that political? 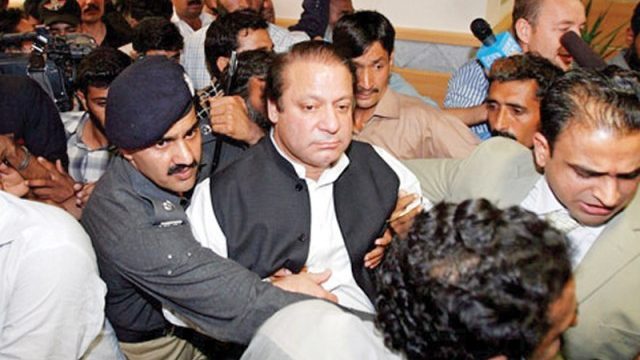 All over the world when the crisis happens people turn over to the governments. Not in Pakistan, here an ousted Prime Minister is turning over to the people to redeem his own and his party’s lost pride and prestige. Leading people in politics warrants advancing people’s interests not needing people to advance your own interests.

The problem with Nawaz Sharif throughout his political career and more importantly as the leader of one of the biggest political party in Pakistan has been that he has been an ‘empire builder’ instead of a ‘rule builder’.

Sidelined from political glory by a unanimous verdict of the highest court, his influence, and standing as an admirable political leader may hardly be ever emulated. Clearly, his political authority and influence is on the wane.

Considering himself and his family and even his political party and its leadership exempted from the rules that the others must follow, the three times Prime Minister was curiously dubbed by the judgment of Supreme Court as ‘God father’ and the way of working of his government compared to ‘Sicilian mafia’.

Now in a denial mode, the former Prime Minister is claiming his own political indispensability by utilizing the political shoulders of whatever political credibility remains with those serving the ‘House of Sharif’s’.

If the former Prime Minister was ever aspiring for greater democracy would we be like this – a nation threatened and under assault by Democrats themselves. Democracy was supposed to bring us peace, prosperity and happiness – not nepotism, favoritism selectivity and the tyranny of the majority that has curtailed institutional freedom and left the poor and wanting people of this country in great pain and distress.

Unfortunately, but truly the former Prime Minister’s reactive strategy after his disqualification is leading us to that front

The former Prime Ministers road journey predictably will be largely a personal and party satisfying show. It may even suggest to him that he has won but unfortunately for him, he has already lost it where it counts – the Supreme Court of Pakistan.

Mr. Nawaz Sharif will have to learn to part ways with his political orthodoxy of bringing the state institutions under pressure. What else is the end goal of this journey? The respect and admiration of people do not give any leader the license to engage in corruption and looting the nation’s wealth.

The key question for a resilient Nawaz Sharif is what should he do? Continue on this reactive path under the advice of a ‘mutually praising’ and ‘self-congratulating’ group of political advisors (the beneficial political subordinates) or utilize his own political acumen to correctly understand the now changed equation of power in this country?

Today it is not a single institution that is at the center of power in Pakistan – there is more power parity amongst the institutions (military, judiciary, parliament, and media) than there ever was and the result is – power in this country is shared and stands diffused.

Why do they claim that they ride on the popular support of the people who elect them when all they do is a project to the world their political innocence rather than competence?

The former PM will realize this when his government sponsored and enabled two days (possibly more) GT Road sojourn to Lahore ends. What then?

Need of the time

What Pakistan needs today is a sustained national security strategy which can only come from a leadership that holds clear and lasting strategic vision. The country needs a political leadership that utilizes the virtues of democracy to prevent authoritarianism, extremism and helps the military not only to throw its weight behind it but also shapes its military posture based on its political interpretation and estimates about the enemy.

Read more: Of sit-ins and rallies: the politics on the roads

Which political leader has ever called for a review of our defense and security policies – not on how they should be shaped on his personal direction and whims but by formulating a group of academics, military leaders, journalists, diplomats, and think tanks, senior and accomplished citizens to review them and shape recommendations to be later reviewed and articulated by our security cabinet and military leadership.

The world has been suspicious of what has been going on in our backyard. What efforts (besides the memo gate and dawn leak scandals) has the political leadership undertaken to vehemently deny and disqualify such a world assessment? Politicians giving the impression to the world that there is a ‘permanent government’ and a ‘deep state’ in Pakistan that does not relent only raises questions on their own lack of political power and governmental credibility.

Why do they claim that they ride on the popular support of the people who elect them when all they do is a project to the world their political innocence rather than competence? If power is to be exercised not by the military and the nation state than the real question is what role has the political leadership played over the years to build such a state?

When the kicked up dust of this political storm in the country settles down we can then maybe carry out a major assessment of how to enhance our prestige and influence in the world? Although a nuclear power our political instability makes us look very ‘un-nuclear’.

The institutions of the state need across the board bipartisan support to strengthen them with the country moving forward in an environment of shared and diffused state power. Reducing the power of mafias, non-state actors, terrorists, criminals and all those that are established anti-nationalists should be our institutions top priority not allowing them to evade state law and accountability.

The process started by the Supreme Court must not end – the people may reach out in big numbers and throng and shower petals on the motorcade of their leader but if such a leader is ever found corrupt than the law must take its course.

Institutions within a state must cooperate and compete but what cannot be allowed and sustained is for anyone to create an environment for them to confront. Unfortunately, but truly the former Prime Minister’s reactive strategy after his disqualification is leading us to that front.

Lastly, it may never be forgotten that the primary goal of the military is to protect the country and anyone who challenges its determination to do so – may that be a dysfunctional democracy makes a huge mistake and the military will never allow the consequences of such an eventuality to be borne by the nation state.

Dr. Muhammad Ali Ehsan did his doctorate in International Relations from Karachi Univ; where he also teaches. His Ph.D. work is on ‘Civil-Military Relations in Pakistan’. He served for 25 years in Pakistan Army, and remained an Instructor in Pakistan Military Academy. The views expressed in this article are the author’s own and do not necessarily reflect Global Village Space’s editorial policy.

The medical benefits of a development project like CPEC

The suave, the well-dressed and the eloquent!

What happened on the Kasur front in the 1965 war?