Raw vs Roasted Nuts: Which Is Healthier?

Both raw and roasted nuts are good for you and provide health benefits. Both varieties contain similar amounts of calories, protein, carbs and fiber. However, roasting nuts may damage their healthy fat, reduce their nutrient content and lead to the formation of a harmful substance called acrylamide. 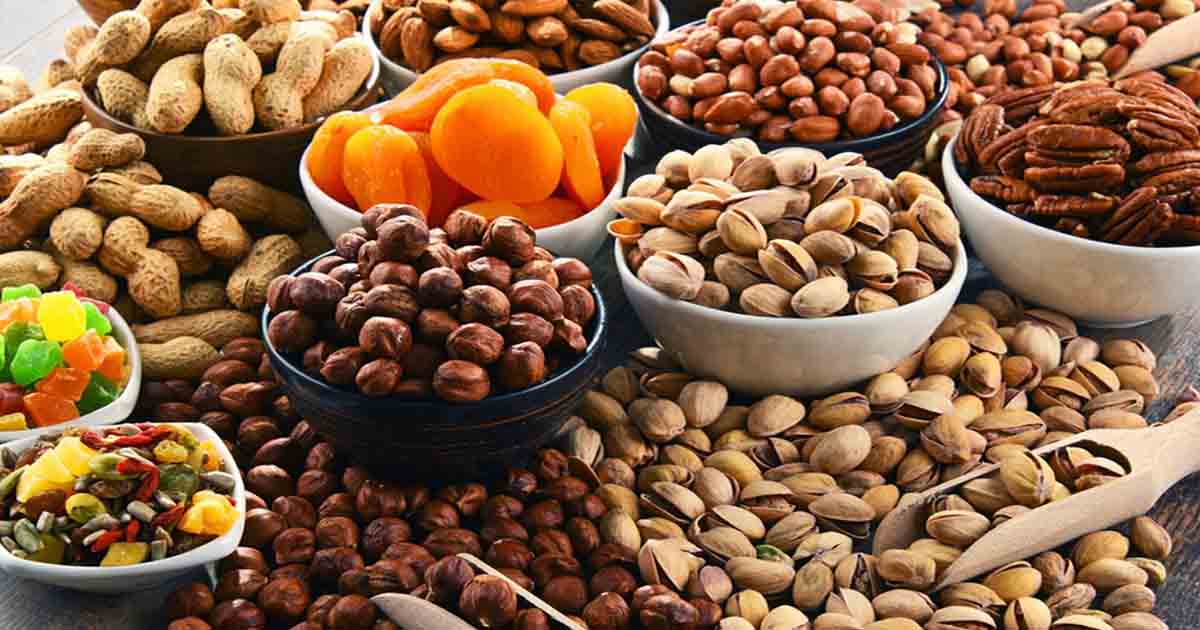 Nuts make a perfect snack option when you’re on the go. Though they’re usually high in fat, the fat they contain is a healthy type. They’re also good sources of fiber and protein.

Why Are Nuts Roasted?

Nuts are generally roasted to improve their taste, aroma and crunchy texture. Roasting is defined as cooking using dry heat, which cooks the food evenly on all sides. Most nuts are roasted without their shell, except for pistachios, which are often roasted in-shell.

Nuts are a great source of nutrients, including vitamin E, magnesium and phosphorus. They’re also loaded with antioxidants

Meanwhile, raw nuts have not been roasted. Roasting methods are sometimes used to separate the shells of nuts from their kernels. This is a common method of shelling cashews and the reason why they’re almost never sold raw.

There are two main kinds of roasting:

In addition to these two methods, nuts can be roasted in the microwave. You can buy nuts roasted, or you can roast them yourself.

Roasting nuts changes their structure and chemical composition. Specifically, it changes their color and decreases their moisture content, giving rise to their crunchy texture. Raw and dry-roasted nuts have very similar amounts of fat, carbs and protein. Although, roasted nuts have slightly more fat and calories per gram, but the difference is minimal.

During roasting, nuts lose some moisture. Therefore, a roasted nut weighs less than a raw nut. That explains why the fat content per ounce is slightly higher in roasted nuts.

Some studies have shown that roasting nuts does not change the overall fat content. However, the polyunsaturated fats in roasted nuts become more susceptible to oxidation, as the structure of the nut changes.

Meanwhile, the protein and carb contents of raw and roasted nuts are very similar. Nevertheless, roasted nuts can be slightly higher or lower in these macronutrients, depending on the type of nut.

Contrary to what you might expect, oil-roasted nuts are only slightly higher in fat and calories than dry-roasted nuts. That’s because nuts are naturally high in fat and cannot absorb much more of it from added fat.

Some Nutrients Are Lost During Roasting

Nuts are a great source of nutrients, including vitamin E, magnesium and phosphorus. They’re also loaded with antioxidants. Some of these nutrients are sensitive to heat and might be lost during the roasting process.

For example, some types of antioxidants are degraded during roasting. Antioxidants are important for your health because they help protect your cells against damage from free radicals.

Nevertheless, increased temperature and roasting time have been shown to decrease antioxidant activity, but only up to a certain point. In one study, the levels of antioxidants in various nuts decreased constantly from the start of roasting at 302°F (150°C) until 30 minutes later.

Almonds are most susceptible to the formation of acrylamide, since they contain high amounts of the amino acid asparagine

Furthermore, not all antioxidants are damaged by roasting. One study reported that the amounts of the antioxidants lutein and zeaxanthin in pistachios and hazelnuts were not affected by roasting. Studies also indicate that vitamin E, thiamine and carotenoids are lost during roasting. However, the extent of the loss really depends on the nut type and roasting temperature.

Overall, every type of nut and each nutrient responds differently to roasting, depending on the nut type and the roasting conditions. Although some vitamins are lost during roasting, keep in mind that nuts are not the main sources of these vitamins. The exception to this is almonds, which are high in vitamin E.

The rich flavor, color and aroma of roasted nuts is due to compounds that are formed in a chemical reaction called the Maillard reaction.

This is a reaction between the amino acid asparagine and the natural sugar in the nuts. It happens when they’re heated above 248°F (120°C) and gives roasted nuts their brown color.

The Maillard reaction may also be responsible for the formation of the harmful substance acrylamide. This substance is known to cause cancer in animals when consumed in very high doses. It may have potential cancer-causing effects in humans, but the evidence is scarce.

Roasting temperature has a greater impact on acrylamide formation than the duration of roasting. Almonds are most susceptible to the formation of acrylamide, since they contain high amounts of the amino acid asparagine.

Acrylamide starts to form in almonds when they are heated above 266°F (130°C). The formation of acrylamide becomes especially high at temperatures above 295°F (146°C).

Results from one study showed that acrylamide levels increased significantly when almonds were roasted for 25 minutes at temperatures between 282–323°F (139–162°C).

It’s important to note that even though you are exposed to acrylamide in almonds, as well as in other foods, these amounts are much lower than the amount considered to be harmful. However, if you want to minimize acrylamide exposure from almonds, make sure to roast them at a relatively low temperature of about 265°F (130°C).

Potentially harmful bacteria, such as Salmonella and E. coli, might be present in raw nuts. That’s because nuts are sometimes thrown on or fall to the ground during harvesting. If the soil is contaminated with bacteria, the nuts will easily come into contact with the bacteria.

Contaminated water might also introduce harmful bacteria, either during harvest or post-harvesting. In fact, Salmonella has been detected in raw nuts, including almonds, macadamia nuts, walnuts and pistachios.

One study reported that nearly 1% of samples of various nuts contained Salmonella, with the highest contamination rate in macadamia nuts and lowest in hazelnuts. It was not detected in pecans. However, the amount of Salmonella detected was low, so it might not cause illness in healthy individuals. Though outbreaks due to contaminated nuts are uncommon, they’re very serious.

Read more: Can a small daily intake of nuts cause weight loss?

In the US, consuming raw almonds has been linked to a Salmonella outbreak, while consuming in-shell hazelnuts has been associated with an outbreak of E. coli. In order to reduce Salmonella, all almonds in the US today are required to be pasteurized.

While roasting nuts reduces the number of bacteria on them, Salmonella was detected in one sample of roasted pistachios in one study. Another study found no Salmonella or E. coli in roasted nuts.

Furthermore, nuts may contain the toxic carcinogen aflatoxin, which is produced by fungi that sometimes contaminate nuts and grains.

It has been detected in both raw and roasted nuts, including pistachios and walnuts. Aflatoxin is very heat resistant and might survive the roasting process. The best way to avoid aflatoxin contamination is through control of humidity and temperature during drying and storage, rather than roasting.

Which Type Should You Eat

The short answer is both. Raw nuts are very healthy, but they might contain harmful bacteria. However, even if they do, it is unlikely to cause an illness.

Roasted nuts, on the other hand, may contain fewer antioxidants and vitamins. Some of their healthy fats may also become damaged and acrylamide might form, though not in harmful amounts.

In the end, roasting temperature and duration can have a big impact. If nuts are roasted at a low-to-medium temperature of about 284°F (140°C) for approximately 15 minutes, vitamin loss is kept to a minimum, healthy fats are unharmed, and acrylamide is less likely to form.

If you want to eat roasted nuts, keep in mind that some nuts sold in stores are seasoned with salt, and some are even sugar-coated. Instead of buying nuts, buy them raw and roast them yourself, preferably in the oven. That way you can better control the temperature and roast larger quantities of nuts at a time.

If you want to enhance the flavor by oil roasting the nuts, keep in mind that some oils are not suitable for roasting. Oil roast them yourself and choose a heat-stable oil, such as coconut oil.

Both raw and roasted nuts are good for you and provide health benefits. Both varieties contain similar amounts of calories, protein, carbs and fiber. However, roasting nuts may damage their healthy fat, reduce their nutrient content and lead to the formation of a harmful substance called acrylamide.

On the other side, raw nuts are more likely than nuts to contain harmful bacteria like Salmonella. That said, these risks are low. Also, make sure not to store them for too long, since they have a limited shelf life. Only roast nuts that you are planning to eat over the next few days.

The final recommendation is simple — include raw or roasted nuts in your diet for better health.