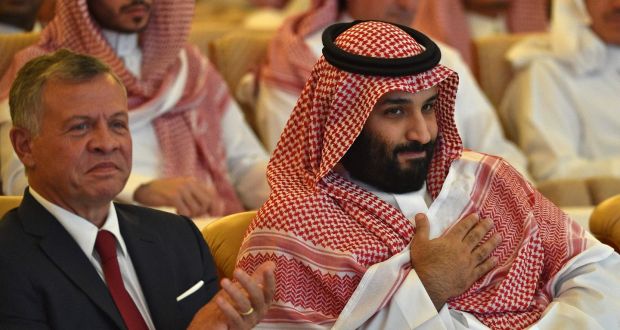 The calls for Saudi Crown Prince Mohammed bin Salman to be held accountable for the murder of journalist Jamal Khashoggi are a “red line”, Saudi Foreign Minister Adel al-Jubeir has said.

In a BBC television interview, Jubeir said on Wednesday any disparaging discussion about Prince Mohammed or his father, the Saudi monarch, would not be tolerated.”In Saudi Arabia our leadership is a red line. The custodian of the two holy mosques (King Salman) and the crown prince are a red line,” Jubeir said.

Khashoggi, a US resident who wrote for The Washington Post and had been critical of Prince Mohammed, was lured to the Saudi consulate in Istanbul on October 2, killed and reportedly dismembered.

After lengthy denials, Saudi authorities admitted responsibility and said 21 people had been taken into custody. However, a CIA analysis leaked to the US media went further, reportedly pointing the finger at the crown prince.

Jubeir insisted that Prince Mohammed had not been involved in the killing. “We have made that very clear. We have investigations ongoing and we will punish the individuals who are responsible for this,” he said. He called on Turkey to come forward with all its evidence about the slaying and stop leaking out information.

The foreign minister said the murder was a “rogue operation” by intelligence officers. Jubeir also said any possible US sanctions on Saudi Arabia would be short-sighted.

Meanwhile, the President of the United States of America Donald Trump has termed Saudi Arabia as a “spectacular ally” brushing away CIA’s report as premature assessment. He has said, during a brief interaction with reporters on Saturday at White House Lawn that the U.S government is yet to establish the core perpetrator whose order led to the death of Washington Post opinion contributor Jamal Khashoggi at Saudi Consulate in Istanbul.

He further stated that a final report would be submitted by the Central Intelligence Agency which will decide the fate of the conclusion the U.S has made regarding the crime which he said: “should never have happened”. But he also did not rule out the possibility that Mohammed Bin Salman was responsible for the murder of the journalist.

Read more: Khashoggi Murder: MBS woes are far from over?

The State Department has already discarded the reports circulating in the media. “Recent reports indicating that the US government has made a final conclusion are inaccurate,” State Department spokeswoman Heather Nauert said in a statement. “There remain numerous unanswered questions with respect to the murder of Mr. Khashoggi.”

While the source of the news is yet to be identified but the fact that it was leaked to multiple top-tier publications of the United States simultaneously speak volumes of the motive which was intended. It is certain from the series of statements coming from President Trump and his aides that the administration is in no mood to sabotage the US-Saudi defense contracts, which as per Donald Trump worth around $110 billion dollars.

US Police Officer under fire for fondling a deceased Woman