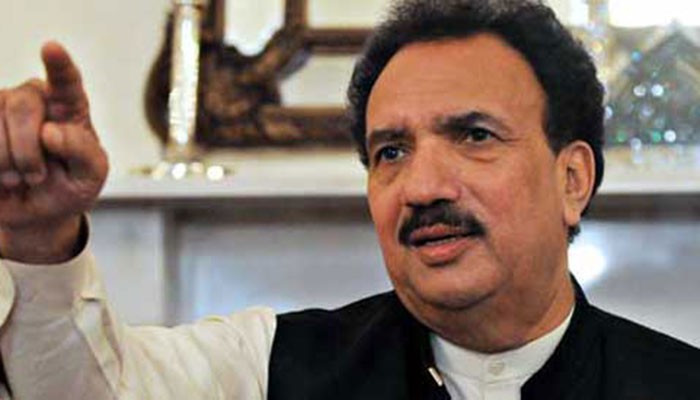 Senator Rehman Malik criticized ousted former PM Nawaz Sharif over a highly controversial interview with Dawn and demanded that Nawaz should retract his statement over the 26/11 Mumbai attacks.

In a controversial interview with Dawn, disgraced Nawaz Sharif stated that Pakistan allowed militants to cross the borders and play a role in 26/11 attacks. He questioned the delay in the trial of Mumbai attacks and opened a floodgate of propaganda in Indian media.

Malik argued that he was not addressing the media to speak against anyone. In an earlier statement, Malik had termed the Nawaz’s remarks in Dawn interview as extremely irresponsible for a thrice-PM.

Nawaz’s statement can have grave consequences for Pakistan, especially, after FATF had put Pakistan on the grey list for failing to comply with the money laundering and anti-terrorism laws.

Speaking on the attacks, Malik said, he made a joint investigation team to investigate the case. But, Indian authorities did not comply with the requirements of the law. India never provided the evidence against the alleged culprits. Moreover, Indian did not allow Pakistan to record the statement of primary suspect Ajmal Kasab before his hanging.

Malik claimed that atrocities committed against innocent Kashmiri people had put Indian on the back foot. Desperate to seek world’s attention, India showcased this attack to put a terrorist state tag on Pakistan. 26/11 had been engineered to divert world attention from the violation of human rights in Kashmir, Malik added.India itself is indulged in terrorist attacks in Pakistan. India sending Kulbhushan Jadhav to conduct anti-state operations in Pakistan, which he confessed.

He claimed that the Mumbai attacks were sting operations by Indian’s spy agency Research and Analysis Wing (RAW). The agency prepared the David Headley syndicate to carry out the operation. Headley is in custody now. He played a double agent and had associations with American government and Lashkar-e-Taiba. Pakistan born Headley was given the amnesty in a drug case by the US and he worked in-coordination with RAW as a travel agent and facilitated this operation.

Moreover, Ansari brothers who were involved in the operation as a facilitator of RAW were left unprosecuted by Delhi, claimed Malik. The former interior minister pleaded Nawaz to take his astonishing and hurtful statement back.

Even, if the non-state actors had orchestrated this attack, Pakistani security establishment or government had not played any role in it.

He questioned Nawaz that what will he [Nawaz] do if India takes him to courts case to international institutions. Since it is an opportunity for India to again build its cases across the world. India’s strong lobbyists may pursue with renewed interest to loath Pakistan internationally.

Read more: Nawaz claims others have given similar statements on Mumbai and gotten…

What if United Nations summons Nawaz in connection with his statement? Can the three-time PM explain this to them? He asked. Moreover, he pleaded Nawaz to have mercy on this Nation and take back his statement.

As he did on Sunday. Malik again reasserted that Pakistan did not play any role in Mumbai attacks and “it was RAW which facilitated the non-state actors some (of which) were recruited from Pakistan. That is why India did not give access to Pak investigators despite numerous request.”

Although, PML-N distanced itself from the Nawaz’s comments and termed it a statement which does not represent the policy of the party and is wrongly attributed to Nawaz. Shahbaz Sharif commented that Nawaz’s remarks were twisted out of context.

He questioned the delay in the trial of Mumbai attacks and opened a floodgate of propaganda in Indian media.

Nawaz’s statement can have grave consequences for Pakistan, especially, after FATF had put Pakistan on the grey list for failing to comply with the money laundering and anti-terrorism laws. Depending on how India moves the case forward, it could have even dire international repercussions.

Nawaz failure to differentiate between the state actors and non- state actors is a serious concern because he has blurred the line between the two.  But, the truth must prevail. Allegations, which Pakistan has always denied at all forums. Even, if the non-state actors had orchestrated this attack, Pakistani security establishment or government had not played any role in it.

US to reopen consulate in Jerusalem to aid Palestine

Private hospitals and clinics in Karachi: Citizens decide to stand up against the murderers