Prime Minister Imran Khan inaugurated a smartphone app, Report Corruption, which will allow people across the country to report corruption cases that fall within the jurisdiction of the Punjab government, and file evidence in the form of images, videos and documents. 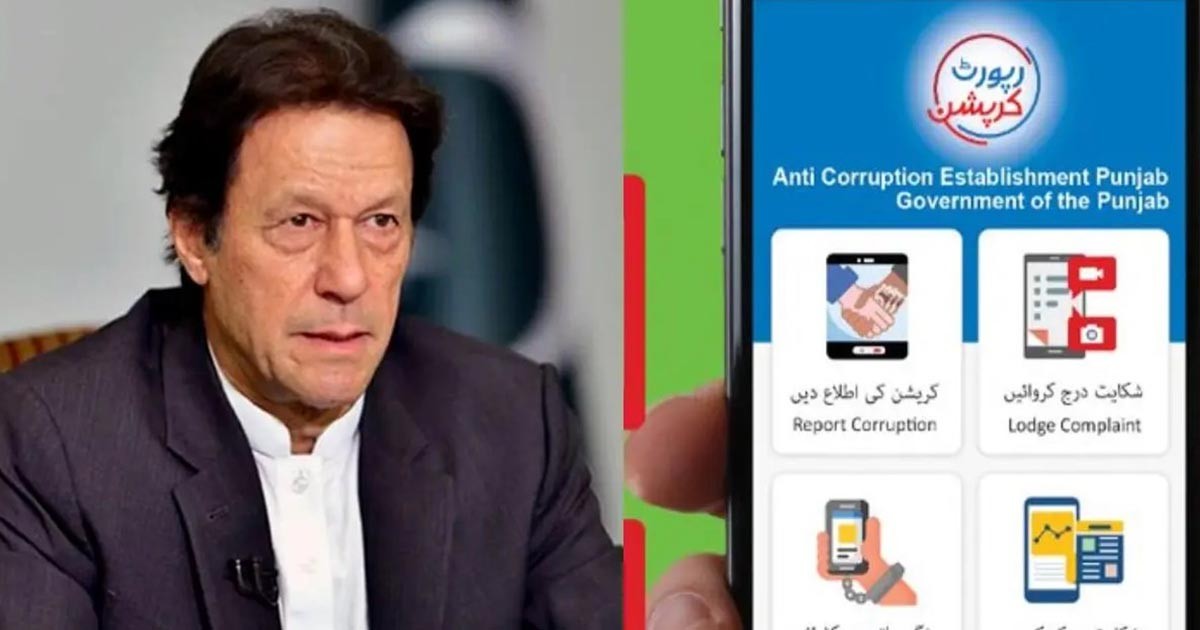 Prime Minister Imran Khan, on Monday, said that his dream for a Naya Pakistan will only come true if the youth across the country actively participate in the accountability drive by exposing all those who have and will attempt to loot the wealth of the nation and hoard it abroad.

The Prime Minister was addressing the inauguration ceremony of a smartphone app, ‘Report Corruption’, introduced by the Anti-Corruption Establishment of Punjab.

Youth to Participate in Accountability

Addressing the inauguration ceremony, Prime Minister Imran Khan said, “Naya Pakistan is in the making, however, the dream will only come true if the youth takes part in the process and chases the plunderers.”

He continued, “It is unfortunate that people continue to shower petals on the corrupt and plunderers. The entire nation will have to participate in the government’s Jihad against corruption by exposing the corrupt elements of our society.”

Report Corruption, the mobile app can be used to report cases of corruption that fall within the jurisdiction of Punjab, and it allows the user to file in evidence in the form of documents, images, and videos.

The Prime Minister lambasted the opposition leaders, particularly those hailing from the Pakistan Muslim League-Nawaz. He accused the PML-N leaders of initiating baseless mega projects as they allowed them to receive commissions and kickbacks.

He said, “The Multan Metro Bus is one such example of the projects launched by the former PML-N government, as it was not needed or even desired by the people of Multan. Now, the project is incurring billions of rupees worth of losses.”

Prime Minister Imran Khan urged CM Usman Buzdar to highlight the feats achieved by the Punjab government to make the nation understand the rewards of the anti-corruption drive initiated by the provincial government.

He said, “The Punjab government has managed to retrieve Rs.130 billion worth encroached land, while Rs.5 billion have been recovered from corrupt elements.”

The Premier said that the land recovered by the Punjab government will be used for welfare projects, such as low-cost housing units for the poverty-ridden.

Prime Minister Imran Khan argued that countries, such as Switzerland, Congo, and Nigeria, which are free of corruption enjoy economic progress without having any resources, while countries that are rich in resources remain poor due to corruption.

He said, “The Chinese economy is regarded as the fastest growing economy in the world because the Chinese people and their government cracked down on corruption.” He said that 400 minister-level people were jailed on charges of corruption.

The Premier also referred to the anti-corruption drives in Iraq, Chile, and other states, and said that the world is changing and corruption cannot be concealed. The Premier said that corruption individuals laundered the looted wealth abroad in dollars, which reduced national resources and impacted the value of the national currency.

He observed that corrupt societies cannot garner investment, and overseas Pakistanis are eager to invest their money in the country once the government has successfully eradicated the social menace.

Chief Minister Usman Buzdar also spoke on the occasion, saying that the launch of the smartphone app is a remarkable achievement, as it will empower people to report corruption through their mobile phones.

Shahzad Akbar, Special Adviser to the PM on Accountability, said that during the one and a half years of the PTI-led Punjab government, around Rs.132 billion have been recovered. He observed that with the launch of the smartphone app, the Punjab government is fulfilling its plans to digitize the anti-corruption department.

Previous articleWe now have contact lenses that detect blood sugar levels!
Next articleHere are some useful diet tips to help you get fit this winter!

20 September 2021
Previous articleWe now have contact lenses that detect blood sugar levels!
Next articleHere are some useful diet tips to help you get fit this winter!

PM Khan to NYT: Pakistan will not take military action against Taliban