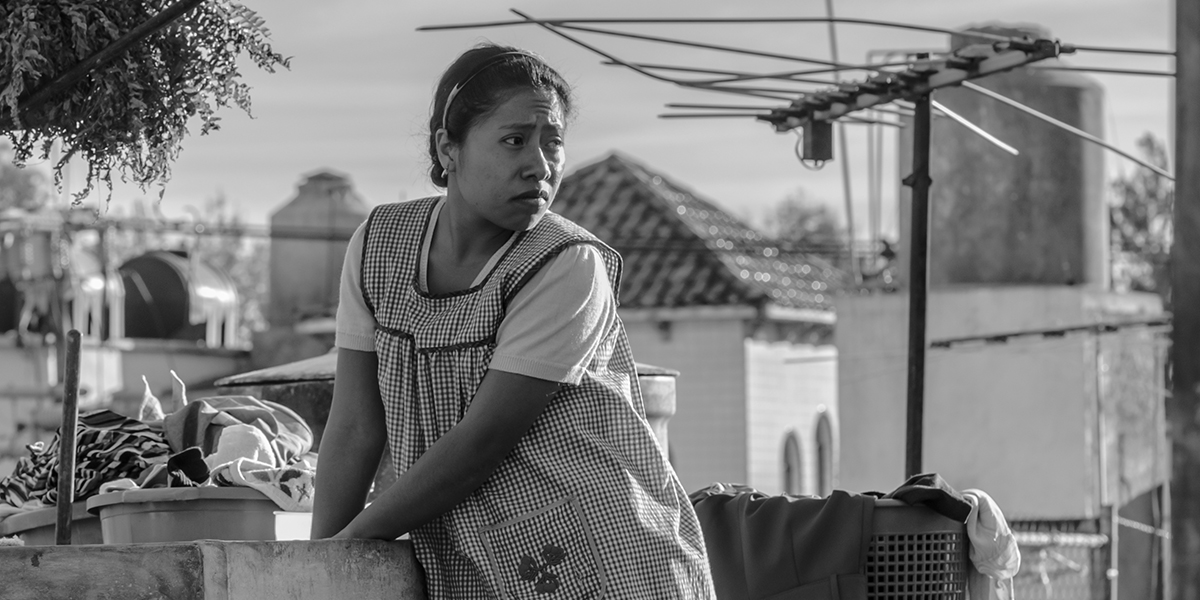 Roma, Mexican director’s first film since 2013’s Gravity, is art. Shot entirely in black and white, with no accompanying score and no named talent attached to it, Cuarón’s semi-autobiographical Spanish language film is a feat of beauty. The best film of 2018 is a reminder of the limitless power of cinema and filmmaking and how it can encapsulate moments in time– both impersonal and intimate.

The film centers on an indigenous maid in Mexico, Cleo who works for a middle-class family. She doesn’t say a lot and spends most of her time taking care of the house and the kids and it is her graceful resolve that carries much of this film. There are no twists and spoilers in Roma, the plot of this movie is very simplistic and that is precisely the point. Roma isn’t trying to play with your mind or even make you think at all. It is all about feeling, building up its story so that when our silent and stoic heroine finally unravels, it makes for a crushing, truly moving scene that brings the entire movie together.

Read more: Where does Pakistan stand on Netflix chart?

Cuarón’s previous film was the sci-fi thriller Gravity. A film that featured leads Sandra Bullock and George Clooney and was showy and unintelligent. The film was a technical marvel and managed to nab a number of awards, despite it not quite being as stellar as one would have hoped and earned a ton of money.

Roma, for all intent and purposes, is nothing like it. Slow moving and minimalistic, the film uses its setting and protagonist to tell a deeply personal story framed in the backdrop of some of Mexico’s most pivotal historical events. Each frame of this movie is meticulously well shot and the production values, which go back and recreate Colonia Roma in the 1970s, do so with such precision that it seems impossible to imagine the lengths to which the director has gone to recreate his childhood neighborhood. While the director has chosen Cleo, to be the eyes of the movie, Cuarón’s revivification of his childhood and his parent’s failing marriage makes Roma very much about the director himself.

While Roma does feature a 9-year-old character that is loosely based on the director, it is mostly interested in covering the history of Mexico, both economical and race and class relations wise in the 1970s. The film has echoes of French new wave cinema and Italian black and white films, but it is decidedly a Mexican story. Shot in his own neighborhood and featuring some of his own furniture, Cuarón really takes the time and energy to replicate his childhood and play it out in widescreen. While the movie will likely be painstakingly slow for some — the first hour, for example, simply shows our protagonist doing chores — but the film’s decision to take its time makes the story ultimately all the more satisfying given we have invested significant time with our characters.

Cleo, our lead is played by a first-time actress Yalitza Martinez who gives an amazingly realistic performance. Her grounded performance makes for some of the rawest and heartbreaking scenes, and given that she spends much of the movie in silence, her delivery and expressions really anchors the movie. Also amazing is Marina de Tavira’s performance as the matriarch of the house and who is based on Cuarón’s own mother.

Aside from these standout performances, the real star of the movie is Cuarón’s incredible cinematography. Roma is the definition of a picture perfect film and it is shocking to know that this is the Mexican director’s first stint as a cinematographer given how much command he has and how breathtaking the visuals are. Like the Cold War, Roma uses its black and white color scheme to great effect but it succeeds where Pawlikowski fails and it is in creating a sense of living in worldliness about it. Elaborate long takes, the use of the wide lens, and positioning the camera at unique angles, bring Cleo’s world to life and make us feel like we are right there in the thick of things. Also creating an immersive experience is the flawless sound design. Rather than use a score, the director has essentially recreated the sounds of the Roma in its time and this decision is one of the cleverest choices Cuarón has made as it transports us to Mexico.

Roma’s extraordinary production values and set design are also awe-inspiring and all of that helps make the film one of the best movies to come out in recent times. In a year, where foreign films were exceptionally strong, Cuarón’s Roma stands out as a clear frontrunner, showing the director at the height of his powers in what will surely be hailed as his seminal masterpiece in years to come.

Anadolu - 29 May 2021
Authorities have not disclosed the patient's location, however, Indian envoy's wife tested positive for coronavirus last week

Oped: How Shah Mehmood Qureshi does not represent Pakistan

Disha Patani seems to be breathtaking as she flaunts her beautifully toned midriff at a meal outing...