The couple reached the beautiful Chitral valley to raise the issue of climate change. The Royal couple was presented with traditional caps and dance. 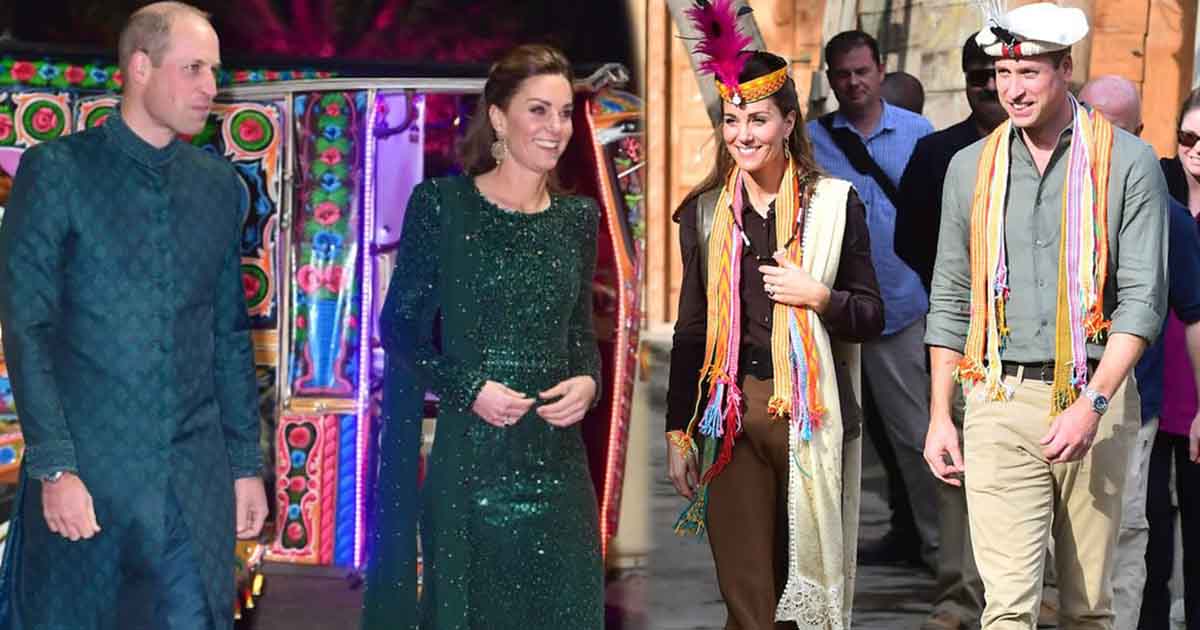 Prince William and Princess Kate Middleton have reached Chitral for a one-day trip, which is on the schedule of their five-day trip to Pakistan. The trip to the Chitral valley and Hindu Kush mountain range focuses on their agenda to address the climate change on melting glaciers in the region.

Chitral :: People of Pakistan have warmly welcomed the Duke and Duchess of Cambridge to the land of hospitality; the visit of Royal Couple will trigger an increase in the influx of foreign Tourists to Pakistan. #RoyalsVisitPakistan 🇵🇰🇬🇧 pic.twitter.com/gBRKyfol1E— PTI (@PTIofficial) October 16, 2019

The Duke & Duchess of Cambridge were given an exceptional reception upon their arrival at Chitral Airport. The royal couple was presented with the traditional Pakol caps. Princess Kate was given a traditional warm shawl while Prince William was given an embroidered coat. The clad in the traditional gifted attires, posed for pictures. Kate Middleton sporting a Pakol Cap reminisced Princess of Wales, Diana.

The couple visited Chiatibo Glacier in the Hindu Kush mountain range in Chitral to witness the effects of climate change and the consequences of global warming.

The Duke and Duchess of Cambridge view a melting glacier in the Hindu Kush mountain range of Pakistan. The couple hope their visit will shine a light on the consequences of climate change. (📷Neil Hall via @PAImages) pic.twitter.com/ShO63v8oL2— Lizzie Robinson (@LizzieITV) October 16, 2019

The royal couple met with the locals and visited various places in the valley. They attended a cultural show organized for them, enjoyed a local dance of Kalash valley performed in the show.

The locals have expressed delight over the visit of the royal couple to Chitral, adding that their visit will help boost tourism in the area. Adding that they will serve the couple with indigenous sweets if they visited the bazaar in Chitral.

The locals have asserted that the visit will also highlight the plight of Chitral valley as it the most-affected area by natural calamities and climate change.

Last night, the couple attended a glitzy reception at Pakistan Monument, Islamabad. The show was organized by the British High Commission in honor of the royal couple.

It is great to see our culture and our traditions at the centre of attention.
Duke and Duchess of Cambridge have surely won the hearts of Pakistanis. We are known for our hospitality and the love expressed by our people for the royal couple shows their exemplary kindness. pic.twitter.com/HJGl52pG2k— Munaza Hassan (@MunazaHassan) October 16, 2019

The couple reached the venue, in traditional attires by foreign designers, in an auto-rickshaw. Kate Middleton donned an extremely embellished green maxi while Prince William wore a blue sherwani.

The video of the royal couple stepping down from the auto-rickshaw won immense praise from Pakistani social media users on social media.

While addressing the attendees of the event, Prince William expressed gratitude for the extreme given honor, warmth, and hospitality.

Adding that, his grandmother Queen Elizabeth II had visited the country five decades ago when Islamabad-the capital- was under construction. Now the city has developed into one of the finest and exceptional capital cities in the world.

A few snaps from last night’s #RoyalVisitPakistan reception at the Pakistan Monument. pic.twitter.com/lLi6ARXdAV

Can a civil judge issue warrants to arrest an assistant commissioner?

India is the most corrupt country in Asia, Transparency International