RSS’ terrifying show of Power in Hyderabad: No restrictions can stop Extremism

Social media went into haywire following the video of whopping demonstrators of the thrice banned militia of RSS marching on the streets of the Telangana, Hyderabad. The social media users went round the bend with the massive demonstration of RSS; slammed the authorities that while CAB protestors were quelled why the RSS is allowed to hold a public rally. 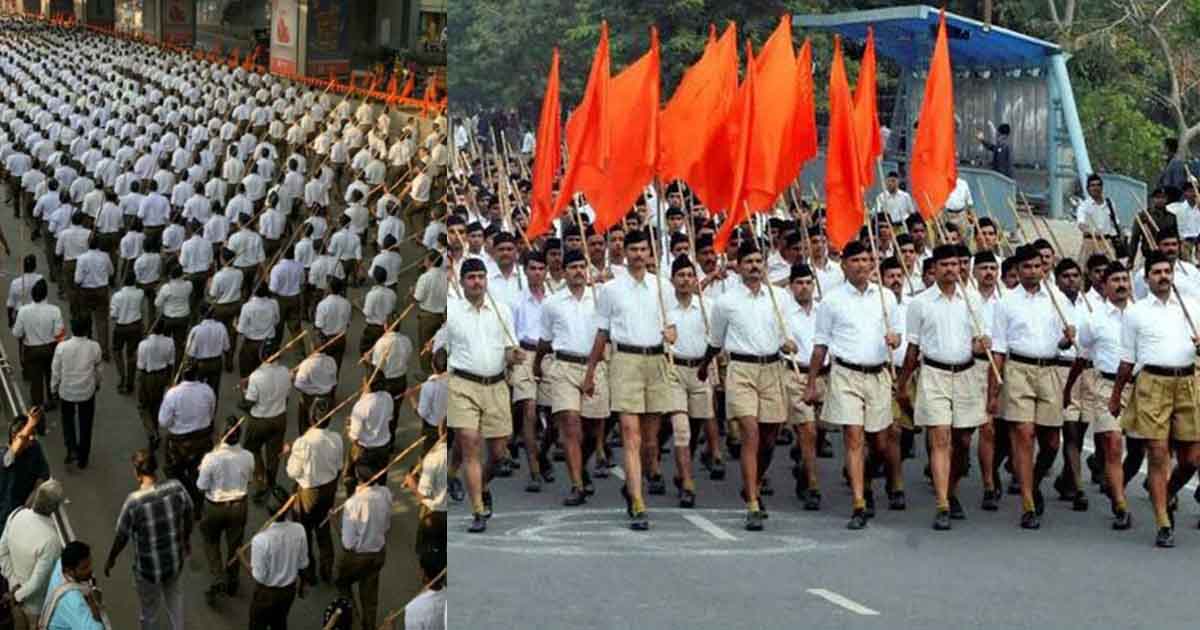 A video of a mighty rally by RSS members in Hyderabad took social media by storm. The video circulating online shows the members of RSS – the parent organization of BJP, marching together in khaki uniform in Telangana, Hyderabad.

RSS held a massive demonstration in Hyderabad, India. Various groups of RSS took out a foot march from different places and joined the main rally to march towards Saroornagar stadium. The three-day annual gathering of RSS members is underway in Hyderabad.

What would happen if students marched with sticks in their hands during the #CAA_NRCProtests ?
Explain. (10 Marks) https://t.co/b4549H3Hr4

No section 144 if you wear the uniform of Rashtriya SchutzStaffel and March with a Lathi https://t.co/ZBPXjDM3t0

The video shows hundreds of RSS marchers marching in an organized rally with sticks in the hands. The critics assert that BJP and RSS want to exert their force and power through the tremendously huge rally in the face of countrywide protests against the Citizenship Amendment Bill.

RSS is picking every move from the Nazi book. Soldiers publicly parading with weapons either to commemorate a win or flex muscle, both with an intent to induce fear & threaten the enemy. Hyderabad March with lathi Bhakts may think that it was peaceful,but is it really? #CAA_NRC pic.twitter.com/tXDSR83r5X

RSS have permission to march with lathis on main roads but Indians can't protest against NRC and CAA. Not even 144 sec applied ?

Why @CPHydCity Where was The police when Rss March with latis? Seriously was this March of peace? That's to with latis? Why is this discrimination! https://t.co/wrWOpshxRi

Why no Indian flags 🇮🇳 in this march of RSS? Are they nationalists or hindu fanatics? 🤔pic.twitter.com/io1Q8XjQBB

Social media slammed the rally and termed it an attempt to terrorize the secular forces, minorities including Muslims and anti-CAB protestors. The social media users slammed that while Police have placed a ban on holding rallies, protests, and demonstrations in the city, the RSS was allowed to conduct large demonstrations while holding sticks in the hands.

“RSS a thrice banned organisation which consists of jobless cowards in khakhi chaddis and is infamously known for being British boot lickers & having the dishonour of the first terr0rist of Independent India” March https://t.co/uCpNj5ibFm

Why did @TelanganaCMO @KTRTRS allowed such terrifying RSS militia to march in Hyderabad. Why no action on this blatant show of extremism in a peaceful urban center! https://t.co/Rw4Mlux7CT

While entire India has been protesting against the CAB, RSS has been supporting the discriminatory citizenship laws against Muslims. CAB is in line with the agenda of the RSS- theocratization of India.

RSS has been backing violence against the Muslims and hounding the minorities in a bid to drive them out of India. There has been a surge in hate crime against Muslims; incidents of beating Muslims to death and lynching them were frequently reported following the imposition of the BJP in the center.

This is a RSS march from Telangana.

RSS is the ideological child of the SS

They are Nazi’s in Khaki uniform

If the international community remains silent — you are complicit in endorsing the ongoing violence:

would the police allow ordinary citizens (non RSS) to have a gathering/peaceful march with lathis that size? how was this allowed? @D_Roopa_IPS ? would you know? And this is not even a BJP state, so can't accuse centre! https://t.co/PaaAtJUPGA

The Citizen Amendment Bill pitched by Indian Home Minister earlier this month has caused hue and cry across India. It amends the Citizenship Act of 1995. The BJP government attempts to maneuver the definition of illegal immigrants in CAB.

While the protestors across India particularly the students of Jamia Milia University, New Delhi and Aligarh Muslim University, in Uttar Pradesh sparked fury following the brutal assault on the demonstrators by law enforcement agencies.

The social media users were in angst that while they were not allowed to demonstrate, RSS members were allowed to violate the restriction imposed by the Hyderabad Police on holding public rallies and demonstrations.