Russia-Iran ties surge under US pressure 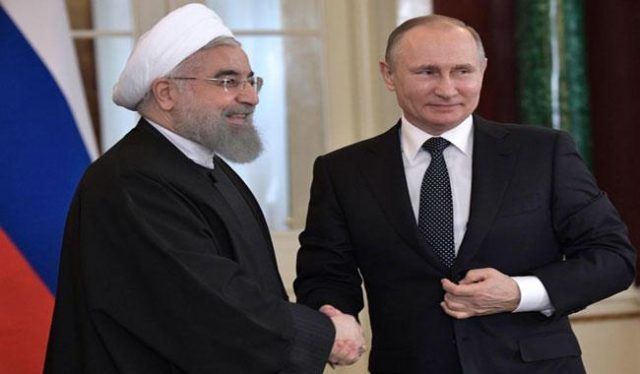 The general expectation was that in the downstream of the 2015 Iran nuclear pact opening the door to Iran’s integration with the international community, Russia-Iran ties might get atrophied. But the exact opposite is happening. A senior Iranian official told Alexander Lavrentiev, Russian President Vladmimir Putin’s special envoy to Syria, at a meeting in Tehran last week that the two countries are having their relations at the highest level in recent times.

The free-trade deal between the EEU and Iran will be a game changer for Russian-Iranian economic cooperation on the whole. Meanwhile, with Russia’s support, Iran has also applied for membership of the Shanghai Cooperation Organization.

If any single factor is to be held accountable for this, it must be the American policies. The US’ containment policies toward Russia pursued under President Barack Obama have continued during the Trump presidency – and, arguably, even intensified. For Iran, on the other hand, the expected scale of integration with the international community has not materialized following the implementation of the 2015 nuclear pact due to the US’ negative attitude. The inertia of the Obama period has given way to hostile US policies under President Trump.

Meanwhile, the conflict in Syria has found Russia and Iran on the same side as staunch supporters of President Bashar Al-Assad. The Russian-Iranian cooperation deepened progressively during the period since the deployment of Russian forces to Syria in September 2016 and proved effective in stemming the tide of the war in favor of the Syrian government.

Read more: To pull out of Syria or to attack Syria: The Trump…

In the process, the overall Russian-Iranian relations began acquiring a strategic character, which they had lacked previously. Today, the spectre of US sanctions haunts both countries. The quasi-alliance with Iran provides much-needed strategic depth to the Russian policies in the Middle East. Whereas, Russia’s robust support on the vexed nuclear issue is invaluable help to Tehran at the present juncture. If Iran’s relations with the West run into difficulty under US pressure, Tehran’s dependence on Russia will only increase. Suffice to say, the more these countries face hostility from the US, the stronger their quasi-alliance is becoming. Shades of the “new type of relations” between Russia and China!

A senior Iranian official told Alexander Lavrentiev, Russian President Vladimir Putin’s special envoy to Syria, at a meeting in Tehran last week that the two countries are having their relations at the highest level in recent times.

If Russia upgrades the Syrian air defence system, the military balance will shift in favor of Damascus and thereby Iran will also be a beneficiary, since Syrian capability to deter any further Israeli adventures in its air space will help the consolidation of long-term Iranian presence in the Levant as well. (Following the killing of several Iranian personnel in a recent Israeli missile attack on a Syrian base near Damascus, the Chief of the Iranian Army Abdolrahim Mousavi said on Saturday that “destroying the Zionist regime is one of the major tasks of the Islamic Revolutionary Guards.”)

In a second development this week, Russian energy minister Alexander Novak was quoted as saying that Russia has received the first shipment of oil under the oil-for-goods deal agreed upon in 2014 (and ratified by the two countries last year) with a view to eschew the use of US dollar in their bilateral trade transactions. Under the deal, Russia would initially buy 100,000 barrels a day from Iran and sell the country $45 billion worth of goods.

Read more: Trump and his generals lock horns over Syria

Indeed, the implications are profound when Russia and Iran, two energy superpowers, collaborate on oil trade. The two countries have also signed six provisional agreements to collaborate on “strategic” energy deals worth up to $30 billion. The Russian Presidential aide Yuri Ushakov recently disclosed that Russian investment in developing Iran’s oil and gas fields could total more than $50 billion.

According to Ushakov, Iran’s formal entry into the Russia-led Eurasian Economic Union is now only a matter of months. The free-trade deal between the EEU and Iran will be a game changer for Russian-Iranian economic cooperation on the whole. Meanwhile, with Russia’s support, Iran has also applied for membership of the Shanghai Cooperation Organization.

Op-ed: Pakistan’s economic malaise, is there any will to tackle it?