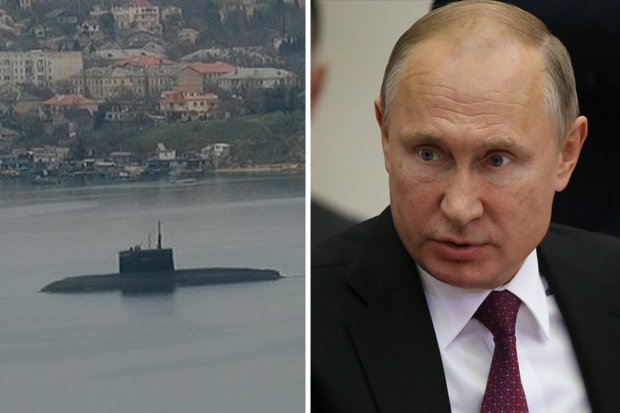 Ukraine released video it claims was taken aboard a Russian ship—likely the armed tugboat Don—as it rammed the tug Yani Kapu.

Russian armed forces seized three Ukrainian warships in the Black Sea after it claimed that the ships entered into Russian territorial waters. Ukraine for its part claims Russian forces attacked the ships before they were captured. The incident came in the wake of heightened tensions between the two countries.

The incident started on Sunday when, according to Russia, three Ukrainian warships, the military tug Yani Kapu and two small artillery boats Berdyansk and Nikopol strayed into Russian territorial waters in the Kerch Strait, which connects the smaller Sea of Azov with the larger Black Sea. The ships were headed north from Odessa to Mariupol in the Sea of Azov.

Russia has not only seized the vessels but also imprisoned the Ukrainian sailors. The facts are ambiguous and Russia can easily legitimize its actions if it can prove its versions of events.

Russia accused the Ukrainian Navy ships of acting aggressively and staying in its territorial waters for too long which prompted a response from it. The area was also overflown by a pair of Russian attack jets and another pair of Ka-52 attack helicopters.

Ukraine’s provided its own version of the events which is different from that of Russia. Ukraine claims that its three warships were in waters shared by both countries under a 2003 agreement. It also claimed that Russian ships opened fire at least 16 times without any provocation and also injured a number of Ukrainian sailors.

Read more: What are the cornerstones of Pakistan’s maritime security strategy?

The Melting Pot: Reason of Tensions

In 2014, Russian troops overtook the Crimean Peninsula using Hybrid tactics which shocked the world. Russia used non-linear tactics in a coordinated manner to neutralize Ukrainian forces stationed in the region without firing a single shot. This was followed by a civil war in eastern Ukraine which saw Russia supporting the rebels who fought pitched battles against government forces.

Ukraine, after this incident has imposed martial law in the country while Russia has installed state of the art S-400 air defense missiles in Crimea which has exacerbated tensions in Eastern Europe.

International Reaction on the Incident

I condemn Russian use of force in Azov Sea. Russian authorities must return Ukrainian sailors, vessels & refrain from further provocations.
I discussed situation with Pres. @poroshenko and will meet his representatives later today.
Europe will stay united in support of Ukraine.

The UK utterly condemns Russia's use of force against Ukrainian vessels entering the Sea of Azov. Once again, we see Russian CONTEMPT for international norms and Ukrainian sovereignty. Russia must release detained Ukrainian sailors and guarantee free passage through Kerch Straits

#NATO is closely monitoring developments in the #AzovSea & #KerchStrait, & we are in contact with the #Ukrainian authorities. We call for restraint & de-escalation. Read my full statement: pic.twitter.com/DDtfvNLa4K

#Russia #Ukraine
France expresses its deep concern at the serious maritime incidents that took place yesterday between Russia and Ukraine […]. This situation is a direct consequence of the annexation of Crimea by Russia in March 2014.
Full statement→ https://t.co/94LnTwzt6U pic.twitter.com/vTQG0bohZ4

Maritime Law and the Strait of Kerch Incident

Military Activities & the use of Force in Territorial Sea

Under both customary international law and Article 2 of the United Nations Convention on the Law of Sea (UNCLOS), the territorial sea is a space characterized by the inherent sovereignty of the coastal state. In this area, the coastal state may, therefore, exercise some degree of interference with respect to foreign military operations.

Now the question arises, whether this interference also allows the military ships to enter into the territorial waters of another country?  Under international law, “innocent passage involves the transit of foreign ships in a manner which is not prejudicial to the peace, good order, and security of the coastal state”.

The Third Conference on the Law of the Sea contributed significantly to the solution of the problem of innocent passage: it struck a compromise by which states exchanged broader navigational rights to foreign vessels in exchange for the recognition of wider territorial waters and the extension of the coastal state’s jurisdiction for resource exploitation.

Ukraine for its part claims Russian forces attacked the ships before they were captured. The incident came in the wake of heightened tensions between the two countries.

As part of that compromise, the Convention text makes clear that warships enjoy the right of innocent passage, but that they may not engage in military activities during such passage. Thus in defining those activities which are prejudicial to the peace, good order, or security of the coastal state, article 19(2) specifies activities, such as military exercises, firing of weapons, launching or taking on board aircraft, and threat or use of force, that have an unmistakable military nature and can therefore be carried out only by warships.

By the virtue of the UNCLOS, it is clear to us that warships with restrictions mentioned above may venture into the territorial waters of another state. In the recent Strait of Kerch incident, Ukraine has acknowledged that its ships were in the Russian territorial waters but has denied that these acted aggressively.

However, the Russian authorities have stated that the Ukrainian vessels stayed in its territorial water longer than necessary and zigzagged in a manner which was deemed threatening by Russian naval forces present in the area. And hence, it took necessary action to neutralize the threats which Ukrainian vessels might have posed.

Russia has not only seized the vessels but also imprisoned the Ukrainian sailors. The facts are ambiguous and Russia can easily legitimize its actions if it can prove its versions of events.

Russia has in the past, used lawfare to legitimize its actions in Crimea. It seems that it is also using the weaknesses in law to its advantage this time too. Both Russia and Ukraine must resolve this issue through dialogue. An independent commission must be established to investigate this event to ensure that such incidents never happen again.

The international community must not add fuel to the fire and encourage both the countries to form a commission headed by experts of maritime law. This commission should than resort to international maritime law to resolve this issue so that it may become a precedent for resolving similar incidents in future.

Zeeshan Muneer is working as an Assistant Editor at Global Village Space and specializes in international humanitarian law. The views expressed in this article are author’s own and do not necessarily reflect the editorial policy of Global Village Space.

Previous articleEarly elections: Another round of media hype
Next articleCan Russia put an end to western hegemony?

25 September 2021
Previous articleEarly elections: Another round of media hype
Next articleCan Russia put an end to western hegemony?

Why British minister Priti Patel had to resign?

92 % Kurds vote for independence in referendum: How will the regional countries react to this?

Forget it, general election will be delayed: CJP