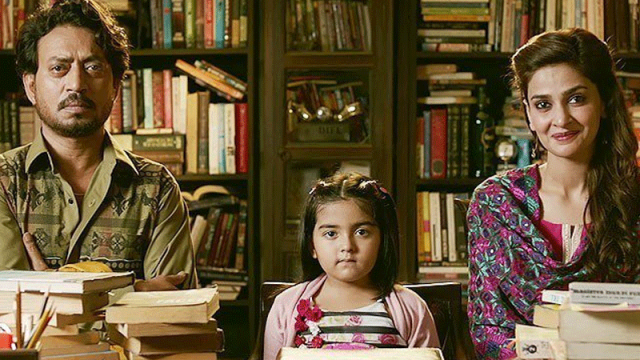 The movie earlier bagged nominations in five categories. Moreover, her co-star from the movie, Irrfan Khan won the award for best actor.

Irrfan Khan was nominated under the category of ‘Best Actor’ for Hindi Medium. He had a tough competition with Shahrukh Khan (Raees) and Akshay Kumar (Toilet; Ek Prem Katha), and Varun Dhawan (Badrinath Ki Dulhaniya).

Saba Qamar too was included in the category of ‘Best Actress’. Despite a powerful performance as a debutant in Hindi Medium, she lost the accolade to Vidya Balan for Tumhari Sallu.

Actors from Pakistan are repeatedly making their name in the Indian film Industry.

From Meera, Jawed Sheikh, Humayun Saeed, Ali Zafar, Mawra Hoccane, Mahira Khan and now Saba Qamar. Each one has proved their mettle. Fawad Khan has even won an award in India for Best Male Debut at the Filmfare Awards in 2015.

Despite the strained diplomatic ties and suspended cultural relations between India and Pakistan, two big movies of Bollywood that competed for the accolade of Best Film had Pakistani actresses as the female lead.

Both, Mahira Khan and Saba Qamar’s Bollywood debut movies Raees and Hindi Medium were competing in the category of Best Film.

Both actresses were rewarded at the Masala Awards late last year for their impactful debut performances.

The actresses faced harsh reaction from the Indian Film Associations. They were barred from participating in the promotional activities for the film.

Saba Qamar’s powerful performance and the movie itself got tremendous praise from the critics.

Saba Qamar played a middle-class woman who wanted to her daughter to enrol in the city’s posh school.

Those box office numbers and the appreciation from fans on both sides of the border made Qamar the first Pakistani actress to secure a nomination for Leading Actor at India’s Filmfare Awards.