With the start of the 21st century, the world became wary of military wings of political parties as they bore no fruit but India and Pakistan latched on to theirs and them in their bid to power are disrupting the peace and stability of their respective nations. The writer analyzes how Pakistan's JUI-F is on the same path as RSS. 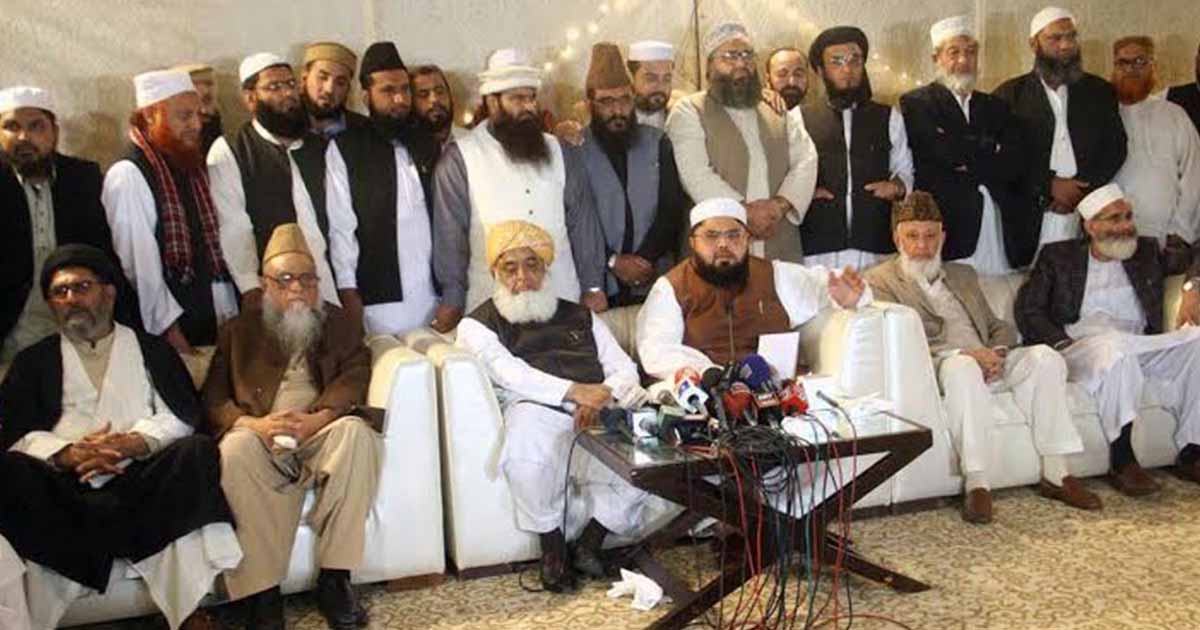 Bharatiya Janata Party (BJP) was carved out of RSS (Rashtriya Swayamsevak Sangh) by Atal Bihari Vajpayee. Despite his slogan of shining India Vajpayee could not get a second term. Narendra Modi then took over from where he had left to implement the RSS agenda of creating a fascist Hindu State in the Indian Subcontinent. India is now moving in the wrong direction.

Pakistan went through a similar manipulative onslaught in the nineties with the formation of Islami Jamhoori Ittehad (IJI) from which emerged several right-wing anti-progressive parties like (PML, JUI-F, JI etc.), the target was to challenge the progressive People’s Party led by Benazir Bhutto (BB). Being an upright politician Air Marshal Asghar Khan sided with (BB) against Zia dominated establishment, status-quo parties.

While much has been written about BJP-RSS connection, the IJI – PML-N, JUI-F rise to power through these linkages remain un-exposed. In the quest for ‘Naya Pakistan’ these IJI – MMA created monsters have to be dealt with and finally detonated for the democratic order to take roots. The leftovers of the Zia era have to be finally put to rest. Lt. Gen Hamid Gul, the Chief Architect of IJI died years ago. The Supreme Court judgement against the main accused in the famous Asghar Khan case awaits implementation. With so many detractors in the system, it is almost impossible to deliver relief to the masses.

The spirit of ‘Charter of Democracy’ has been badly trampled by both signatories (PPP, PML-N). a new charter is needed to save the political dispensation otherwise history may repeat itself

In the last century after the first World War several quasi-military – political outfits came into being. In Germany, the Nazi Party was able to grab power. Impressed by the rise of Hitler several similar movements started. In India it was RSS and the Khaksar Tehrik both wanted to grab power in India. While RSS wanted to create a fundamental Hindu state the Khaksars desired to drive out the colonists to form a united secular country. After the passage of Lahore resolution in 1940 and the subsequent decision of the British to divide the Indian Sub-Continent Allama Mashriqi decided to disband his tehrik in 1947. RSS kept going, now that they have grabbed power in India they are trying to undo the partition.

In Pakistan, in the seventies, Zulfiqar Ali Bhutto (ZAB) impressed by the revolution in China and the rule of the People’s Liberation Army (PLA) formed People’s Guard. It was a uniformed quasi-military outfit. After coming into power it was this organization that performed the role of Police when it went on strike in Punjab and KPK (NWFP). The main opposition under Abdul Wali Khan organized ‘Pakhtoon Zulme’ to counter ‘People’s Guard’. Fearing clash a compromise was reached in the 1973 constitution and non-state quasi-military outfits were banned. ZAB then decided to form the Federal Security Force (FSF). After Zia’s take over in 1977 FSF came under attack and was disbanded. It was accused of the political murder of Ahmed Raza Kasuri’s father.

In the 21st century perhaps only two quasi-military political outfits exist, RSS in India and Ansar-e-Islam in Pakistan. BJP is the political face of RSS while JUI-F is the front end of Ansars. Both of them have several commonalities and similarities. Khaki outfits and Orange colour seems to be preferred by both. While RSS members parade in shorts or pants, the ‘Ansars’ are dressed in Shalwar kameez. Fortunately, JUI-F and its ‘Ansars’ are a political non-entity in Pakistan with very localized influence in parts of KPK and Balochistan only.

Quasi-military – political outfits are dangerous for democracy and should not be allowed under any circumstances. The federal government has decided to ban JUI-F’s ‘Ansar-ul-Islam’, its members will not be allowed to enter the capital with arms. This evil axis between the forces of corruption with JUI-F’s ‘Ansars’ leading the charge with the financial support of the ill-gotten wealth of both PML-N and PPP has to be exposed. It should be considered an attack on the democratic order.

Elections in 2020 are possible under two conditions. If the protesting legislators resign then there will be by-elections to fill in their empty slots. if the PM decides to dissolve the parliament then there will be national elections. In the absence of agreed election reforms, it will be another exercise in futility. The spirit of ‘Charter of Democracy’ has been badly trampled by both signatories (PPP, PML-N). a new charter is needed to save the political dispensation otherwise history may repeat itself.

Read more: Imran Khan’s Miracles: Liberals & Maulvis Are Standing Together “Against Him”

In the 21st century such militant outfits like RSS-BJP, IJI/MMA-JUI-F should be disbanded. Democracy was born in the Bazaars of Athens will all its hustle and bustle. Parades and honour guards are for barracks and cantonments where men in uniform operate. It is the diversity and non-uniformity that sustains the democratic order for which open not closed minds are required. These failed experiments should be eye-openers not blinders. There has to be a wake-up call for the democratic order to survive.