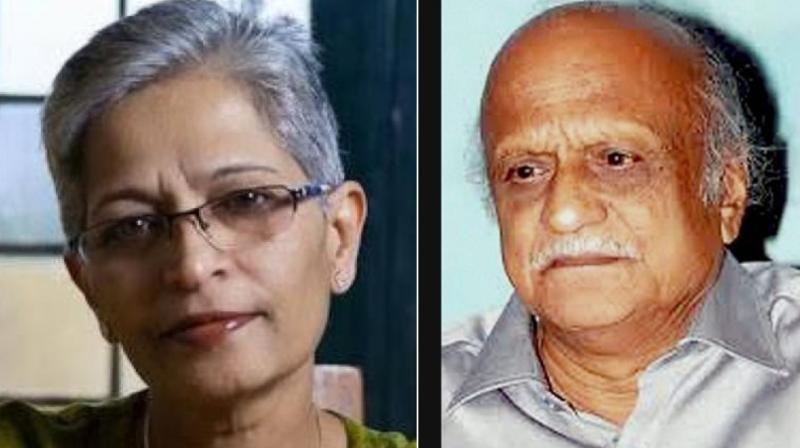 In another breakthrough in the murder investigation of journalist-activist Gauri Lankesh, the SIT probing the case suspects that four top-level leaders of a pro-Hindutva outfit were the ones who conceived the plot to kill her and other rationalists. The outfit is asserted to be the extremist cult known as the Sannatan Sanstha.

According to a source in the SIT, after questioning the accused, it has been revealed that the six accused in the case were the executors of the murder plot and investigators have launched a hunt for four more persons connected to the murder. “There is a suspicion that a retired Army Colonel, who became a member of a pro-Hindutva outfit is one of the four men who hatched the plot,” the SIT source added.

The SIT is in the process of gathering evidence against the four suspects and then nab them. These four suspects are suspected to have ordered Amol Kale, a suspect in the case, to kill Gauri Lankesh. Initially, the investigation had revealed that Amol Kale was the handler of the other five accused. However, after Kale’s questioning, it seems more people were involved, the source said.

The Sanatan Sanstha is unique in the manner that it is a major Hindutva group that exists outside of the fold of the Sangh Parivar, the network of groups operating under the command of the Rashtriya Swayamsevak Sangh (RSS).

Kale is said to have received Rs 1.25 lakh per month to handle logistics for Lankesh’s murder. “Amol Kale was shown several speeches made by Gauri Lankesh by these four persons. After instigating Kale, they convinced him that Gauri Lankesh was to be killed as she had made derogatory statements against the Hindu religion and Hindu gods,” the source added.

The SIT source said that these four men hold important positions in the a pro-Hindutva outfit and after the arrest of the six men – Amol Kale, Amit Degvekar, Manohar Edave, Sujeet Kumar, KT Naveen Kumar and Parashuram Waghmore, the pro-Hindutva organization is trying to shield these four men.

“One of the people we are looking for is Nihal alias Dada. At least three of the four men are being shielded by this organisation which is funding them while they remain underground,” the SIT source added. Gauri Lankesh was shot dead outside her home in Bengaluru on September 5 last year.

Earlier, the State Forensic Science Laboratory has confirmed in a report that the same gun that was used to kill journalist-activist Gauri Lankesh, was used as a murder weapon to kill rationalist MM Kalburgi in Karnataka.  Three of the suspects namely Patil, Akolkar and Pawar are also key suspects in the murders of rationalist Narendra Dabholkar, leftist thinker and rationalist Govind Pansare, and Kannada scholar MM Kalburgi.

According to a source in the SIT, after questioning the accused, it has been revealed that the six accused in the case were the executors of the murder plot and investigators have launched a hunt for four more persons connected to the murder.

The Sanatan Sanstha is declared as “a non-profit organization” and has been functioning in India after its 1990 establishment by Jayant Balaj Athavale. The declared core ambition of the organization is to present spirituality in a logical manner for the common public. Its name translates into the Eternal System and is also called the Sanatana Bharatiya Sanskruti Sanstha.

The Sanatan Sanstha’s main headquarters is at Ramnathi, Ponda in Goa. It has another major office in Panvel, Maharashtra. Moreover, it has offices in Pune, Mumbai, Miraj (Sangli) and other parts of the state. Information about the organizational structure of the Sanatan Sanstha is scarce due to the secretive nature of the organization. However, it seems to be composed of different offices with an inner core that functions like a cult, headed by its leader Athavale. Its members are called sevaks, who are posted throughout the country.

The Sanatan Sanstha has formed a network which includes an affiliate called the Hindu Janajagruti Samiti (HJS), used to propel the demand for a Hindu Rashtra. Many consider the HJS to be a militant front of the Sanstha like the Bajrang Dal. Recently, it has launched another outfit, which has clear military implications, known as the “Dharam Shakti Sena,” aiming to impart military-style training in an effort to guide Hindus in the art of “self-defense”.

The Sanatan Sanstha is unique in the manner that it is a major Hindutva group that exists outside of the fold of the Sangh Parivar, the network of groups operating under the command of the Rashtriya Swayamsevak Sangh (RSS). In fact, the Sanstha has faced most attacks from the political wing of the RSS, the BJP which called for its ban and labeled it a terrorist group.