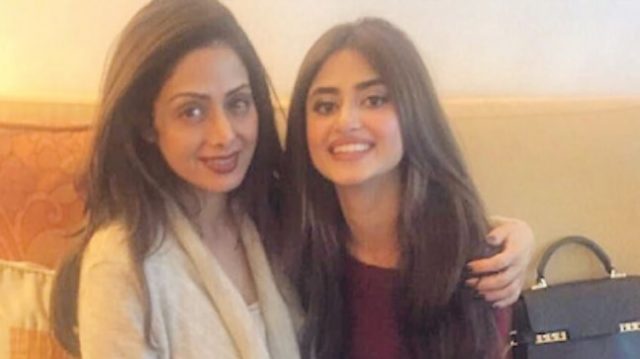 Pakistani actress Sajal Aly expressed her sorrow after the death of magnificent Indian actress Sri Devi on late Saturday in Dubai following a cardiac arrest. Sajal Aly posted a picture with Sri Devi that was captioned: “Lost My Mom Again”.

Read more: Sajal Aly and Imran Abbas to pair up for new drama…

“Sajal was very close to her mother, who she lost recently. It shattered the young girl. Sri took Sajal under her wing after that tragedy and treated her like her own. After the tragedy, Sajal called Sri from her hometown in Pakistan and broke down, saying the whole experience was too close to her to be treated just as a film,” stated the source.

“Normally, Sri doesn’t mix with her colleagues. She is a complete professional on the set. But with Sajal, Sri’s equation was different,” the source added. During the release of the movie, Sri Devi too expressed her affection for Sajal Aly.

“Sajal mera bacha I love you. I don’t know why I am becoming emotional. I miss you all. The way you have worked in the film, it is incredible. This film would have been incomplete without you. It is a special moment for us. We have been waiting for this. I miss you all,” she said.

Sajal Aly was not the only celebrity that expressed her sadness at Sri Devi’s passing. Other Pakistani actors including Mahira Khan, Ali Zafar, Saba Qamar and Adnan Siddiqui all expressed their deepest condolences as well.

Rest in peace #Sridevi ji. You have left us with great memories of joy and tears.

Previous articleClose to the Dead End, Sharifs Out to blow the system
Next articlePerception management strategies for Hafiz Saeed

17 September 2021
Previous articleClose to the Dead End, Sharifs Out to blow the system
Next articlePerception management strategies for Hafiz Saeed

Parwaz Hai Junoon to be officially released in Saudi Arabia