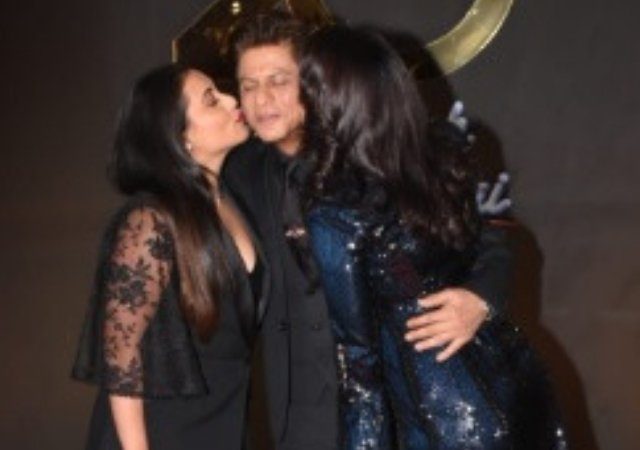 Salman Khan is bringing the big guns for his Dus Ka Dum Season 3 finale. The actor hosts the Indian version of the game show Power of 10 for Sony which has been a huge ratings juggernaut for the channel for quite some time. In the past, the show has had many celebrity contestants from Kareena and Karishma Kapoor, to Ajay Devgan, Katrina Kaif, Ranbir Kapoor and Sanjay Dutt.

Aamir Khan too has made a memorable appearance on the show where he ended up winning 1 Crore instead of 10 after he decided to play it safe even though he knew the right answer. This time Salman Khan brought in his Kuch Kuch Hota Hai co-stars to the event. It’s important to note that the film the trio collaborated on is considered by many to be a classic so them reuniting like this is surely a treat for fans.

It also bodes well for the relationship between Salman and Shah Rukh Khan that had been a bit rocky over the years. But considering SRK was able to make it to Salman’s show and be called “a good friend”, we can rest assured that the two are on good terms now. While the episode itself will air in India on the 1st of September, several clips from the show have made their way online and they promise that a good time is in store for all those who are going to be watching the show.

The video also shows the trio dancing to some of the recent iconic dances from the two Khan’s films, Lungi Dance and Dinka Chika. Salman Khan will have a cameo in the highly anticipated upcoming SRK film Zero which really highlights how good the two are doing right now. The Dus Ka Dum episode also features Sunil Grover channeling his best Amitabh Bachchan.

Recently on Dus Ka Dum Salman Khan admitted that he would love to host Kaun Banega Crorepati (the Indian rendition of Who Wants to be a Millionaire?) and Amitabh Bachchan responded to this on a recent press conference where Big B was promoting the show, by stating that Salman was welcome to host the show.

Now in its tenth year, Amitabh Bachchan has been hosting the popular game show for some time so it stands to reason that he would want to vacate his seat sometime soon. Lucky for him, Salman Khan seems willing to fill in his seat whenever asked. Interestingly, Shah Rukh Khan once hosted Kaun Banega Crorepati for one season in 2007.

Shah Rukh Khan will appear next alongside Anushka Sharma and Katrina Kaif in Zero which releases in December this year. Salman, apart from his one cameo in Zero, won’t be gracing our screens till 2019 with Kick 2 and Bharat (the latter stars SRK’s Zero co-star, Katrina Kaif). Rani Mukerji is also set to appear in a small role in Zero. Her most recent film Hichki did well with critics and audiences alike. It’ll be fun to see the trio interact with each other when the full Dus Ka Dum finale releases.