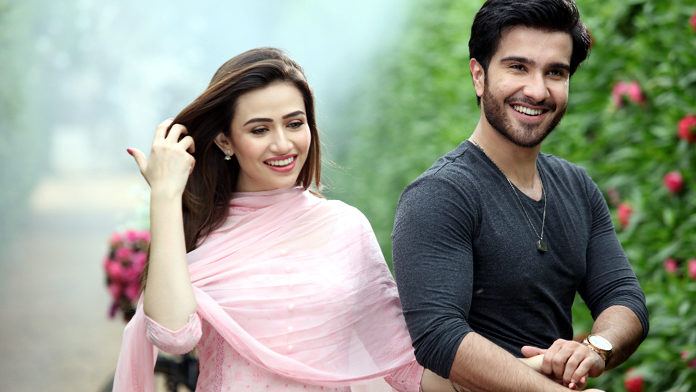 Feroz Khan and Sana Javed are teaming up for Abdullah Kadwani’s another drama serial “Khaani”. The serial will be aired in November on Geo TV.

The drama is a story of love struggle between Sana Javed as Sanam Khan and Feroze Khan as Mir Hadi.

A protagonist, Mir Hadi falls in love with Sana Javed, but a spoilt brat with political affiliations cannot handle a “no” from a girl of his choice. The story is built upon the struggles of a submissive woman who wants to push back Mir Hadi.

The drama gets more intense when this passionate love of Hadi takes the form of an obsession. He then stoops to giving death threats to her family. Also a rebellious boy, he faces extreme confrontation from his family regarding his love for Sanam.

Regarding her role in the drama, Sana Javed says, “It’s a very intense story, as you can probably tell from the trailers and teasers. It has a very strong message attached to it. My character’s name is Sanam Khan (affectionately known as Khaani), she’s a very headstrong girl who knows how to fight for her rights, she’s not afraid to speak up about injustice.”

The drama gets more intense when this passionate love of Hadi takes a form of obsession. He then stoops to giving death threats to her family.

Rahat Fateh Ali Khan with his powerful vocals have sung the song of this intense drama of emotions that will not be less than a roller coaster ride for the viewers.

The video of the title song is a compilation of intense emotional moments from the drama that will surely run shivers down the spine of the viewers.

The first teaser of the drama predicts that it will gross huge viewership as soon as it will be aired.

The drama is written by Asma Nabeel and directed by Anjum Shehzad.

Khaani will be a Telly comeback of Sana Javed after two years. Recently she was featured in her debut film in the leading role of the movie “Mehrunnisa V Lub U” alongside Danish Taimoor.

Modernizing the power sector of Pakistan