Saudi Arabia & Iran: A potential nuclear race in the making? 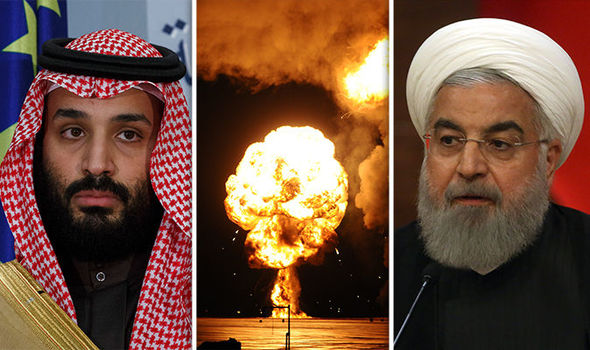 The Saudi focus on nuclear energy serves several of the kingdom’s goals: diversification of its economy, reduction of its dependence on fossil fuels, countering a potential future Iranian nuclear capability, and enhancing efforts to ensure that Saudi Arabia – rather than Iran – emerges as the Middle East’s long-term, dominant power.

Cooperation on nuclear energy was one of 14 agreements worth $65 billion signed during last month’s visit to China by Saudi King Salman. The agreement is for a feasibility study for the construction of High-Temperature Gas-cooled Reactor (HTGR) nuclear power plants in the kingdom as well as cooperation in intellectual property and the development of a domestic industrial supply chain for HTGRs built in Saudi Arabia.

Read more: Iran’s Strategic Move: Reveals its “Reservations” over the “Islamic Military Alliance”; What next?

The agreement was one of the various nuclear-related understandings concluded with China in recent years. Saudi Arabia has signed similar agreements with France, the United States, Pakistan, Russia, South Korea, and Argentina.

To advance its program, involving the construction of 16 reactors by 2030 at a cost of $100 billion, Saudi Arabia established the King Abdullah Atomic and Renewable Energy City devoted to research and application of nuclear technology.

Saudi cooperation with nuclear power Pakistan has long been a source of speculation about the kingdom’s ambition. Pakistan’s former ambassador to the United States, Husain Haqqani, asserts that Saudi Arabia’s close ties to the Pakistani military and intelligence during the anti-Soviet jihad in Afghanistan in the 1980s gave the kingdom arms’ length access to his country’s nuclear capabilities.

“By the 1980s, the Saudi ambassador was a regular guest of A. Q. Khan” or Abdul Qadeer Khan, the controversial nuclear physicist and metallurgical engineer who fathered Pakistan’s atomic bomb, Mr. Haqqani said in an interview.

Retired Pakistani Major General Feroz Hassan Khan, the author of a semi-official history of Pakistan’s nuclear program, has no doubt about the kingdom’s interest.

Saudi officials have repeatedly insisted that the kingdom is developing nuclear capabilities for peaceful purposes such as medicine, electricity generation, and desalination of sea water.

“Saudi Arabia provided generous financial support to Pakistan that enabled the nuclear program to continue, especially when the country was under sanctions,” Mr. Khan said in a separate interview. Mr. Khan was referring to US sanctions imposed in 1998 because of Pakistan’s development of a nuclear weapons capability. He noted that at a time of economic crisis, Pakistan was with Saudi help able “to pay premium prices for expensive technologies.”

The Washington-based Institute for Science and International Security (ISIS) said in a just-published report that it had uncovered evidence that future Pakistani “assistance would not involve Pakistan supplying Saudi Arabia with a full nuclear weapon or weapons; however, Pakistan may assist in other important ways, such as supplying sensitive equipment, materials, and know-how used in enrichment or reprocessing.”

The report concluded that the 2015 international agreement dubbed the Joint Comprehensive Plan of Action (JCPOA) to curb Iran’s nuclear program had “not eliminated the kingdom’s desire for nuclear weapons capabilities and even nuclear weapons… There is little reason to doubt that Saudi Arabia will more actively seek nuclear weapons capabilities, motivated by its concerns about the ending of the JCPOA’s major nuclear limitations starting after year 10 of the deal or sooner if the deal fails,” the report said.

Saudi ambitions and the conclusions of the ISIS report put a high premium on efforts by Kuwait and Oman to mediate an understanding between Saudi Arabia and Iran that would dull the sharp edges of the two countries’ rivalry.

Rather than embarking on a covert program, the report predicted that Saudi Arabia would, for now, focus on building up its civilian nuclear infrastructure as well as a robust nuclear engineering and scientific workforce. This would allow the kingdom to take command of all aspects of the nuclear fuel cycle at some point in the future. Saudi Arabia has in recent years significantly expanded graduate programs at its five nuclear research centers.

Saudi officials have repeatedly insisted that the kingdom is developing nuclear capabilities for peaceful purposes such as medicine, electricity generation, and desalination of sea water. They said Saudi Arabia is committed to putting its future facilities under the supervision of the International Atomic Energy Agency (IAEA).

Saudi Arabia pledged to acquire nuclear fuel from international markets in a 2009 memorandum of understanding with the United States. In its report, ISIS noted however that the kingdom could fall back on its own uranium deposits and acquire or build uranium enrichment or reprocessing plants of its own if regional tension continued to fester. It quoted a former IAEA inspector as saying Saudi Arabia could opt to do so in five years’ time.

Read more: Saudi needs Vision 2030 NOW: If it intends to survive in the Corridors of power

Saudi Arabia’s nuclear agency has suggested that various steps of the nuclear fuel cycle, including fuel fabrication, processing, and enrichment, would lend themselves to local production. Saudi Arabia has yet to mine or process domestic uranium.

Saudi insistence on compliance with the IAEA and on the peaceful nature of its program is designed to avoid the kind of international castigation Iran was subjected to. Saudi Arabia is likely to maintain its position as long as Iran adheres to the nuclear agreement and US President Donald J. Trump does not act on his campaign promise to tear up the accord. Mr. Trump has toughened US attitudes towards Iran but has backed away from tinkering with the nuclear agreement.

“The current situation suggests that Saudi Arabia now has both a high disincentive to pursue nuclear weapons in the short term and a high motivation to pursue them over the long term,” the ISIS said.

Saudi ambitions and the conclusions of the ISIS report put a high premium on efforts by Kuwait and Oman to mediate an understanding between Saudi Arabia and Iran that would dull the sharp edges of the two countries’ rivalry.

They also are likely to persuade Mr. Trump to try to pressure Iran to guarantee that it will not pursue nuclear weapons once the JCPOA expires in a little over a decade. That may prove a tall order given Mr. Trump’s warming relations with anti-Iranian Arab autocracies evident in this week’s visit to Washington by Egyptian President Abdel Fattah Al-Sisi and an earlier visit by Saudi Deputy Crown Prince Mohammed bin Salman.