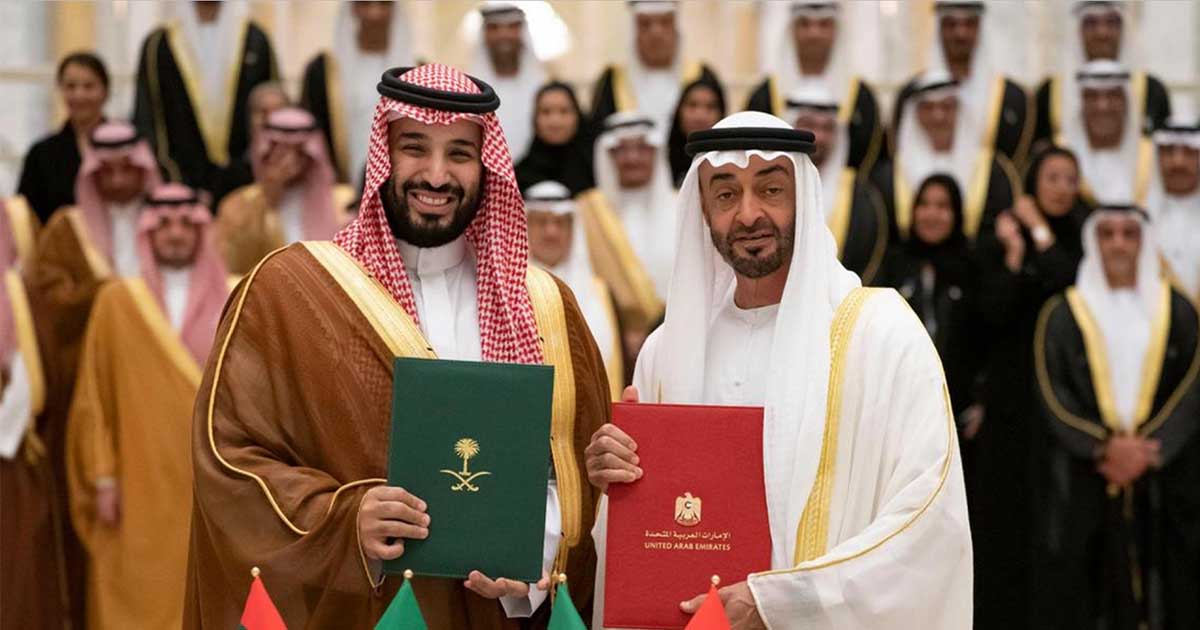 But an Emirati drawdown in July followed by fighting in southern Yemen between UAE-backed separatists and the government — still backed by Riyadh — had exposed rifts between the two Gulf powerhouses.

Earlier this month, a power-sharing agreement brokered by Riyadh and Abu Dhabi was reached between the southern secessionists and the Yemeni government. This has raised hopes for peace talks to end the war in Yemen’s main theatre, between the coalition backed central government and the Huthis.

The streets of Abu Dhabi were lined with Emirati and Saudi flags, while road signs that usually display traffic warnings greeted Prince Mohammed.

The sound of fighter jets resonated across Abu Dhabi’s skies as the two leaders headed together to the opulent presidential palace, where Saudi Arabia’s de facto ruler was greeted with the classic Saudi song “You are the King”.

Since then, tens of thousands of people — most of them civilians — have been killed and millions displaced in what the UN has termed the world’s worst humanitarian crisis

This comes a day after the Saudi-led military coalition said it will release 200 Yemeni Huthi rebels and permit some flights from the insurgent-held capital Sanaa.

The initiatives coincided with a lull in Huthi attacks on Saudi Arabia launched from Yemeni soil and come after a senior official in Riyadh this month said it had an “open channel” with the Iran-aligned rebels.

Patients needing medical care will be allowed to be flown out of Sanaa airport, which has been closed to commercial flights since 2016, coalition spokesman Turki al-Maliki said in a statement on Tuesday.

Saudi Arabia and its allies intervened in Yemen’s war in March 2015, shortly after the Huthis seized the capital Sanaa. Since then, tens of thousands of people — most of them civilians — have been killed and millions displaced in what the UN has termed the world’s worst humanitarian crisis.

Saudi Arabia and the UAE intervened in Yemen's war in 2015, in what has since become the 'world's worst humanitarian crisis'.https://t.co/yPzUx85iOC— The New Arab (@The_NewArab) November 28, 2019

Prince Mohammed’s visit also comes at a time when Saudi Arabia is seeking to attract investment in its oil giant Aramco’s initial public offering, which could be the world’s largest flotation.

According to Bloomberg, Abu Dhabi intends to invest as much as $1.5 billion (1.35 billion euros) in the listing.