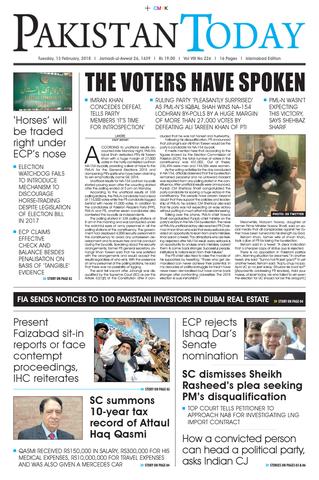 The Supreme Court of Pakistan has issued a detailed verdict of November 16 hearing into the 2017 Faizabad organized by the Tehreek-i-Labbaik Pakistan (TLP). The court has expressed displeasure over the reports submitted by the Election Commission of Pakistan (ECP), PEMRA and Inter-Services Intelligence (ISI).

According to the court order, the ECP was unable to respond to the questions given by the apex court. The apex court was not pleased with the stance taken by the ECP when Arshad conceded that the TLP had not provided financial details of their election campaign but added that those provisions were “cosmetic in nature” having no consequences for the political parties for defying.

The top court will resume the hearing of the case on November 22 where it is expected to design a framework for the protests and how to handle them.

“We are amazed that a senior employee of the ECP… is himself undermining the Elections Act and the Elections Rules [under which parties are required to submit expenditure details],” the bench writes. The court has rejected the report submitted by the ECP and has directed the commission to present another report and address the questions the court is looking for.

Similarly, officials representing PEMRA stated that they had imposed a fine of Rs50, 000 on a cable operator who had interrupted the channels’ broadcasts but no evidence was offered to back the same. PEMRA was represented in the court by seven officials, “but not one of them has the proof of the purported fine/penalty that has been allegedly imposed”, the order says.

Moreover, the court has directed the Defence Ministry secretary and the attorney general to “submit the law/rules/instructions governing ISI and its mandate”.

The TLP organized a sit-in in Faizabad to protest against the government’s alleged involvement in modifying Khatm-e-Nabuwat [finality of Prophet-hood] clause in the Elections Bill 2017. The then law minister Zahid Hamid had to resign after the assurance that no Fatwa would be issued against him.

The court has expressed displeasure over the reports submitted by the Election Commission of Pakistan (ECP), PEMRA and Inter-Services Intelligence (ISI).

ISI initially submitted a report to the SC during the days of sit in. Justice Mushir Alam and Justice Qazi Faez Isa were hearing the Suo Motu notice of the disturbance to public life due to the sit-in at Faizabad. In the report, the ISI told the SC that the sit-in was politically motivated and had political interests.

“The Tehreek Labbaik Ya Rasool Allah is determined to exploit the situation and gain political mileage to gain support for the next general elections,” said a six-page order.  “To keep the participants of the sit-in engaged and charged, the leadership of the protesters resorted to delivering provocative speeches,” the ISI report read.

In the report the agency has declared Khadim Rizvi as “reportedly corrupt”. Rizvi has been also listed as being “arrogant” with his superiors, “harsh” with his subordinates, and “committed” to his cause. It was also stated that Rizvi is “reportedly corrupt” particularly when it comes to financial matters. Moreover, it is also a fact, pointed out the report that he appears to be living within his means.

The report further noted that he has shown an inclination towards misuse of power, the authorities, and resources. The top court will resume the hearing of the case on November 22 where it is expected to design a framework for the protests and how to handle them.

Crimes of Ego: Have Pakistani parents declared a war against teachers?