Maulana is confident to get the resignation of Prime Minister Imran Khan. But is he really serious to topple the government? Is he really protesting against the incumbent government? 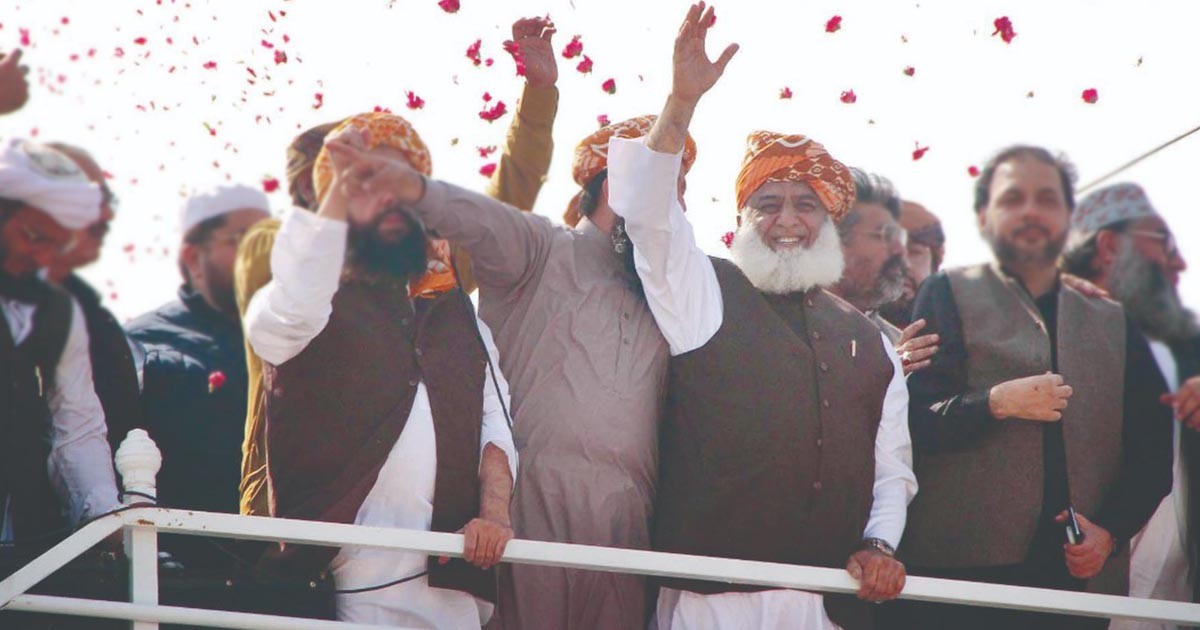 Maulana Fazal-ur-Rehman, chief of Jamiat Ulema-e-Islam-Fazl’s (JUI-F), has announced to topple the government at any cost. Maulana’s so-called Azadi March entered Punjab on Monday evening after reaching Kot Sabzal town in the Rahim Yar Khan district after travelling from Sukkur earlier in the day. He addressed his supporter and said that the incumbent government has put the country’s survival “at-risk” and it is the duty of the opposition to protect the constitution and democracy.

PTI News (Have burnt all bridges, says Fazl as march enters Punjab) has been published on PTI News – https://t.co/wnquXKKWZ6 pic.twitter.com/itrdm9nGrC

But analysts doubt his intentions and raise several important questions; what does Maulana want to achieve through this protest? Will he achieve what he wants to achieve? Will the PPP and PML-N become an active part of the protest if it prolongs in the federal capital?

What Maulana wants & what will he achieve? What has Maulana gained & what Imran Khan has lost? https://t.co/TWMvHMuJ8V

Maulana, who could not manage to retain his own seat in the National Assembly in the General Elections 2018, argued that the incumbent government has made the constitution a joke. He urged his followers to stand firm and confident until they get the resignation of Prime Minister Imran Khan. “The constitution has been made a joke in this country. The prime minister has ruined the economy, and a country with a devastated economy cannot survive. We approached the masses against him and took out 15 million marches and now we are able to help the people get rid of the government,” the JUI-F chief said.

Read more: Neither me nor you can Eliminate Imran Khan: COAS tells Maulana

He also accused the government of restricting the media. “When the fake Prime Minister talks to media, he says that he did not impose any restriction. He should tell the nation under whose supervision the Pakistan Media Regulatory Authority (PEMRA), which has issued a letter restricting TV anchors, works,” he added.

He was alluding to a notification issued by the PEMRA restricting anchors from appearing in talk-shows to offer their opinions or analysis.

However, the decision was criticized by the PTI government and PEMRA had to explain its position on the subject. Asad Umar said:

No anchor has been stopped to express. They have their exclusive shows to discuss anything and everything. The advisory has been reiteration of existing code of conduct on court orders which needs to be taken care of to avoid conjecturing.

PEMRA then issued a statement that read,

Maulana in Islamabad: Who will Control Mob?

Maulana has been allowed to organize a protest in a park of D-3, Islamabad. The authorities have made sure that no disruption takes place and the JUI-F has agreed that no individual from the party shall take part in any unlawful activity. However, analysts point out that what will happen if this mob gets out of control? Who will control them in the federal capital? Who has taken the responsibility of this mob of more than 40 thousand people?

Political analysts believe that the PPP and PML-N are not to lead the protest. Second-tier leadership from both parties is taking part in the protest but they are doing nothing substantial in generating any anti-government narrative. Sources claim that there have been some ‘understanding’ between the government and the PPP and PML-N in order to deal with desperate Maulana who is willing to go any extent to be politically relevant.

Read more: Fazal Ur Rehman- Fighting for Islam or Islamabad?

Sources further claim that the PML-N’s supreme leader, Nawaz Sharif, and former President, Asif Ali Zardari, are likely to leave the country for their treatment in London.

What Does Maulana Want?

There is another argument being fashioned by some political commentators that Maulana’s protest has carefully been managed. He is not protesting against the government rather he is protesting against the establishment which did not give him his ‘due right’ this time during the elections. It is claimed that Maulana wants to let them know that minus-Maulana formula may be counterproductive since he enjoys considerable popularity in the tribal areas which gives him street power to hijack the political process.

It is also believed that Maulana knows the fact the premier shall not resign nor the government will be toppled. He is just demanding some space for his politics and trying to convince the establishment that he is, and should be, relevant in the political process of Pakistan.

Who designed Imran Khan’s clothes for US visit?