Aussie player Brett Lee recalled an interesting yet hilarious exchange with Shoaib Akhtar on the field in an old video shared by Pakistani speedster Shoaib Akhtar. 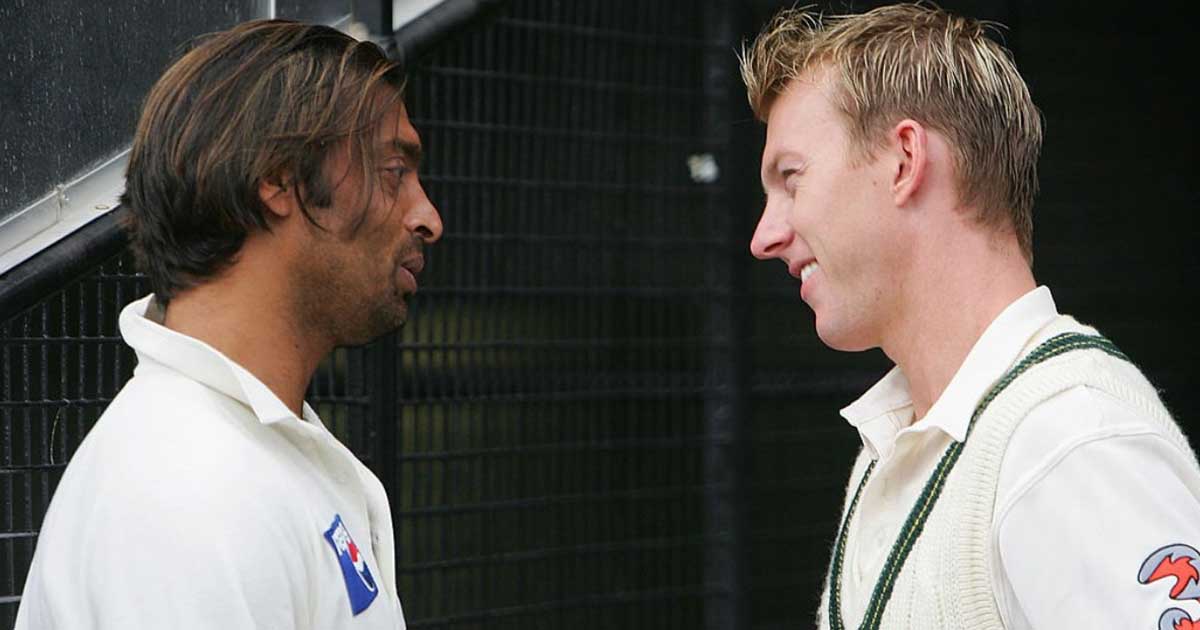 Former pacer Shoaib Akhtar says his Aussie counterpart, Brett Lee, was an equal terror for batsmen on the field in his latest tweet. He shared a snippet from an Indian comedy show ‘The Kapil Sharma Show’ on which Brett Lee was a guest.

Sharing the video, Shoaib Akhtar wrote, “Binga being very humble there honestly. @BrettLee_58 himself was quite a terror on the field for the batsmen of that era.”

Binga being very humble there honestly. @BrettLee_58 himself was quite a terror on the field for the batsmen of that era. #BrettLee #ExpressFast #Australia pic.twitter.com/pzHTg41qMF

In the video host, Kapil Sharma asked Brett Lee about the bowler he feared the most during his cricketing days. Brett Lee hilariously said, “Everyone.” Adding that he even feared the spinners.

“I realized in my last three years as a cricketer that if I open my eyes while batting, it’s easier,” said Lee before adding on how he hid behind his bat trying not to get hit.

He then recalled an exchange with former Pakistani pacer Shoaib Akhtar on the field. “Me and him get along very well,” Brett Lee said at the start of the story.

Read more: “The only poster I had in my room was of Imran Khan” clarifies Shoaib Akhtar

“So, I’m out batting and I’m sweaty and nervous,” the World Cup-winner said.

“My nickname is ‘Binga’ and I suddenly hear ‘Binga, Binga’. I look up, and there’s Shoaib, about 75 meters back. He goes ‘I’m going to kill you”, Lee says.

He explained the scene of Shoaib Akhtar running into bowl. He said that while he was anticipating the delivery and the ball hit his foot.

“It hit me straight on the foot. I’ve appealed to the umpire – ‘Howzzat! That’s gotta be out, surely?'” Lee says, with the audience in splits.

“And you know what happened? That silly Australian umpire said not out,” Lee concluded.

Shoaib Akhtar said that Brett Lee was just being humble and was a frightening prospect himself#SamaaTVhttps://t.co/ElnQnXDwIx

Pollock said his team used to breathe a collective sigh of relief every time Shoaib Akhtar was done with his bowling spell.

He expressed these views in a podcast with Sky Sports Cricket, He said that he used to monitor the signals of Pakistani captain to gauge how long Akhtar was going to remain in the attack.

“When batting, we used to watch the Pakistan captain see how many overs Shoaib Akhtar had left in his spell,” Pollock said.

“When he’d get the signal that he was out of the attack, we would think, Yes!”

He also compared Brett Lee and Shoaib Akhtar but added that playing the latter in the sub-continent was far more difficult.

“Playing fast-bowlers on different surfaces made a huge difference. When playing Brett Lee in Perth, Australia, although he was blitz, we felt we could hang back or go down when he bowled short. But when facing Akhtar, in the sub-continent, we could not do that because of the lack of bounce.

“There was a chance we could get a yorker or a beamer at some stage. When he got his inswinging yorkers wrong, they used to come hip and chest high.”

He added that Shoaib Akhtar and Brett Lee introduced new dimensions to fast bowling because it encouraged other bowlers to great speed.

“The speed gun brought a different dimension to fast bowling because all of a sudden now you had something through which you could register how quick you were on the field,” he said.

“You always feared the fast bowlers you played against and we had Shoaib Akhtar and Brett Lee at that time. They were the ones trying to gun for 160 [kph],” Pollock added.