India dreams to become a super power. But lack of basic facilities to 1.3 billion people is an imminent challenge that should be focused. 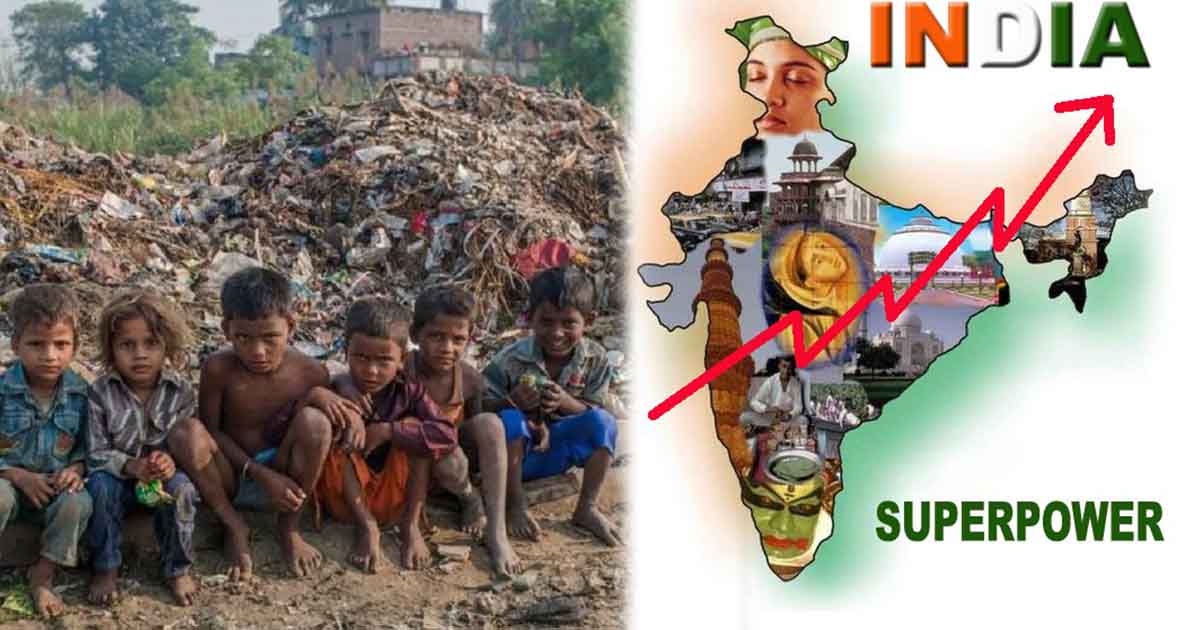 Indians entered the current decade with bated breath, having been indoctrinated since shortly before the turn of the century with the completely false expectation that their country would finally become a “superpower” by 2020. They didn’t know exactly what this would mean in practice, but it sounded prestigious enough and was a welcome distraction from the abject poverty that marks many of their lives.

After all, Prime Minister Modi told them last March that they were now a “space superpower” after successfully conducting an anti-satellite missile test. He then declared less than a month later ahead of the parliamentary elections in May of that year that only he could fulfill India’s “superpower” dreams.

Then-BJP President Amit Shah seconded this statement shortly thereafter prior to it being reiterated by Modi’s Minister of State in September when he promised his people that India is on the “verge of being a superpower”. Once again, nobody ever really explained what being a “superpower” entailed, but the hyper-nationalist population wanted so desperately for the rest of the world to recognize them as one anyhow.

An Epic Disappointment Decades In The Making

That was why it was a disappointment of epic proportions for them that India entered 2020 without becoming the envy of the world like they falsely expected. The popular Indian online news site Scroll.in published a powerful piece at the time titled “India Superpower 2020: Tracing the brief history of a spectacularly incorrect prediction”, which touched upon the 1998 origin of the “superpower 2020” prediction and then explained its viral evolution across the proceeding years to the point where it basically became the country’s unofficial slogan over the last decade.

Read more: Modi’s calls to “Do or Die” to end poverty

Those who had earlier expressed their reservations about this unrealistic expectation were viciously attacked for being so-called “anti-nationals”, and if they weren’t Indian, then they were usually accused of “Hinduphobia”, but those defamatory abuses are no longer relevant after the influential Shiv Sena Hindu nationalist party publicly acknowledged that India isn’t even a “developed nation”, let alone anywhere near becoming a “superpower”.

The US Calls India’s “Superpower” Bluff

This was very important development because the organization contributes to framing the national narrative, meaning that Indians might never talk about being a “superpower” again, as if what Scroll.in described in their article as the nation’s “collective delusion” over the past two decades never happened at all.

Shiv Sena didn’t suddenly switch their narrative from one of impending “superpower” status to that of India simply being yet another “super poor” “Global South” country no different from dozens of others just for sake of factual accuracy but because the nation stands to lose several billion dollars a year if it sticks to that debunked script.

India is miles away from the status of developed countries on parameters like education, health, employment, cleanliness and poverty alleviation

The US recently reclassified India as a “developed economy” ahead of Trump’s visit to the country later this month where he’s expected to sign major military and trade deals with America’s new strategic partner.

Asia Times reported that this decision was made for technical reasons since India’s share of world trade was above the 0.5% threshold qualifying it for “developing economy” status, hence why nearly 2000 of its products are no longer eligible for the Generalized System of Preferences (GSP) regime that had previously given $5.7 billion in imports to the US duty-free status in 2017, thus making it the largest beneficiary of this program.

Shiv Sena, forgetting all about everything that it had said in the previous years about India’s supposedly imminent “superpower” status, furiously lashed out at the US last week by describing its move as “a big blow to our economy…a big crisis for India.”

Walking back its entire narrative of India’s “miraculous growth” which had hitherto won it millions of devoted followers all across the country, the Hindu nationalist party repeated the same observations that the nation’s critics at home and abroad have been saying for years already, namely that “India is miles away from the status of developed countries on parameters like education, health, employment, cleanliness and poverty alleviation.”

Evidently, speaking incessantly about India’s supposedly impending “superpower” status is useful for winning votes but becomes economically counterproductive the moment that the US acts like it believes that false narrative and then makes moves to eliminate the country’s preferential market access as a result. With $5.7 billion on the line, Shiv Sena had no choice but to tacitly admit that it and everyone else who had been celebrating India’s rise as a “superpower” were simply lying this whole time.

It’s No Longer “Hinduphobic” To Share Facts About India

There are some crucial lessons that other countries can learn from India’s humiliating experience, the most obvious of which is for political leaders to be more responsible when talking to the public about their country’s future status.

Giving the largely impoverished masses unrealistically high expectations of global prestige using a never-defined slogan such as “superpower” is deceptive to the extreme and strongly suggests that they were deliberately manipulating their people for political purposes, likely to distract them from their dire economic situation with delusions of international grandeur.

Read more: India’s focus should shift from going to Mars to making Toilets

It’s all fun and games until the deadline for “superpower status” finally passed with a whimper and then the US took India at its word by restricting duty-free market access for $5.7 billion worth of its exports, thus dealing a heavy blow to some of its companies which were dependent on that regime in order to remain competitive.

Shiv Sena is right, “India is miles away from the status of developed countries on parameters like education, health, employment, cleanliness and poverty alleviation”, but they were wrong for lying about that all this time, though at least those who repeat the party’s new rhetoric can finally speak freely without fear of being attacked as “anti-national” or “Hinduphobic”.

Andrew Korybko is a political analyst, radio host, and regular contributor to several online outlets. He specializes in Russian affairs and geopolitics, specifically the US strategy in Eurasia. His other areas of focus include tactics of regime change, color revolutions and unconventional warfare used across the world. His book, “Hybrid Wars: The Indirect Adaptive Approach To Regime Change”, extensively analyzes the situations in Syria and Ukraine and claims to prove that they represent a new model of strategic warfare being waged by the US.

This article first appeared on “One world: Global Think Tank” and has been republished with the author’s permission. The views in this article are the author’s own and do not necessarily reflect the editorial policy of Global Village Space.