Syria: What Have the Flames of War Left Behind in Aleppo! 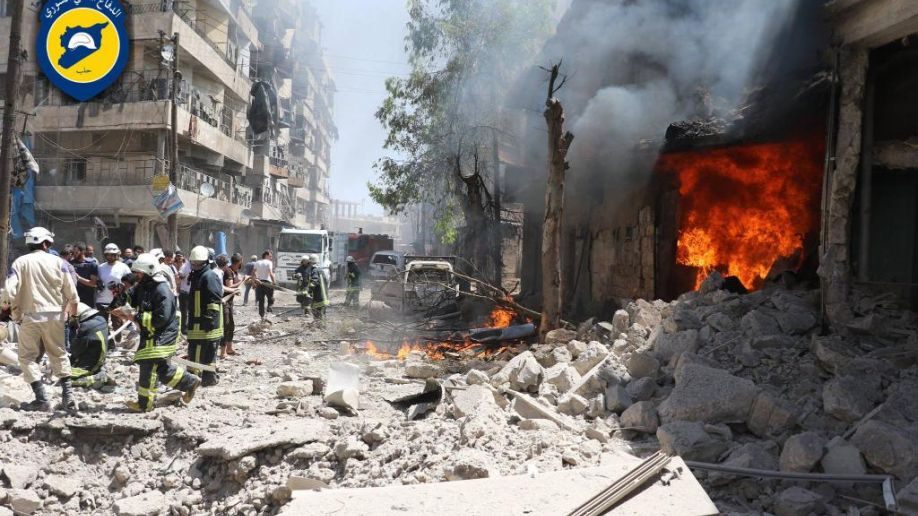 Anyone who has ever been to Syria has shared memories of ubiquitous olive groves and orange gardens, diligently cultivated by local farmers. Plowed fields and sunlit greenhouses were an inseparable part of a typical Syrian rural landscape. However, the picture has changed, and not for the better. Spirit of distress came instead of prosperity, and fruitful gardens were devastated by the flames of war.

Peace might have started creeping into the streets, but the continuation of a normal life is not an easy task.

The city of Aleppo, industrial and financial center of Syria, suffered the most. After having bled the city and its people dry, the militants resorted to destruction. As they ran, the main power plant was set on fire together with hundreds of thousand liters of fuel that spilled out and burned everything in its pass.

Now, only the patches of scorched earth and rusted carcasses of fuel tanks remain there. Everything else was looted by the militants: copper cables, electric parts, gears, and even furniture.

The plant is still out of service. Its core hardware, that had been supplying not only the largest urban and industrial area of Syria but also the adjacent countries power grids, has taken substantial damage. The repair crews are working to bring back to life a single power block by scratching the other four for spare parts to give the city a minimum electricity supply.

The traces of war still loom over the city. When people return to their homes they often find them transformed into fire positions, hiding unexploded munitions or booby-trapped by the militants.

The damage is enormous but peculiarly selective: while the Japan-made turbines were left untouched, the generators made in the U.S. were destroyed to the core. It is now impossible to rebuild them due to the sanctions imposed on Syria by the West, explains the plant’s Deputy General Director Ghiyas al-Ahmar. This is why the citizens of Aleppo still suffer from lack of electricity and cannot warm their houses during cold weather. Power cuts also impede the recovery of the industry. Is this what the West wanted?

The Repair Crews are Working to Bring the Power Plant Back to Life
This concern is shared by Omar Azzad, head of eastern Aleppo administration, who leads the reconstruction of the most damaged part of the city. The militants have been destroying buildings to create barricades from the rubble of concrete, reinforcement bars, and stones. Now that the heavy equipment is scarce because of the war and buying new machines or spare parts are unavailable to the Western sanctions, the rubble can only be cleared by hand.

The main power plant was set on fire together with hundreds of thousand liters of fuel that spilled out and burned everything in its pass.

The work begins early in the morning and lasts till night. Every day thousands of people come to clear the streets, repair the roads and buildings, more and more displaced citizens are coming back to rebuild their homes. The traders return to the streets and the industrial companies are getting ready to re-launch production. Every day more jobs are created.

Is War Really Over?

The traces of war still loom over the city. When people return to their homes they often find them transformed into fire positions, hiding unexploded munitions or booby-trapped by the militants. In the most difficult cases, the citizens of Aleppo turn for help to the mine clearance specialists from the Russian military police.

The most common ones are the pressure mines casually disguised to look like a fire extinguisher or a gas cylinder. In a more elaborated design, recently discovered by the specialists, several interconnected improvised explosive devices were hidden in multiple adjacent buildings. The wires that were plugged into them lead to a tunnel and eventually to a militant’s hideout.

The citizens of Aleppo still suffer from lack of electricity and cannot warm their houses during cold weather.

To help the people cope with everyday struggles, humanitarian help is regularly distributed in eastern Aleppo. The population of the areas previously held by the opposition is in desperate need of help, as it has been strikingly demonstrated by the story of Mutia al-Fares, a mother of eight and a nurse, whose husband perished during the war. Mutia’s family lives on 19 thousand liras (around $ 35) per month. She confesses that without the humanitarian help they would, inevitably, starve to death.

Showing a shameful negligence, the UN has not sent humanitarian aid to eastern Aleppo. The UN Special Advisor for Syria Jan Egeland has taken no real measures to help the citizens. Moreover, the UN completely halted its humanitarian missions in Aleppo after the city was liberated by the Syrian army.

In the present circumstances, when people are trying to return to normal lives and might be finding traces of hopes to cling on to, will the humanitarians keep scurrying away from Aleppo? Peace might have started creeping into the streets, but the continuation of a normal life is not an easy task. Unless efforts are made to help the Syrians in every possible manner, Aleppo might never be able to see a better day in the future.

Sophie Mangal is a freelance writer and a member of the Inside Syria Media Center. After attending the University of North Carolina at Chapel Hill as a media and journalism major, Mangal monitored the refugee crisis in Europe, drawing parallels between the Syrian conflict and the Balkan problem, and has visited Syria on several occasions. This article was first published in The International Reporter and is republished with the permission of the author.

Pakistani politics and why it needs a revolution

Fresh Iran protests lead to 9 fatalities and hundreds of arrests