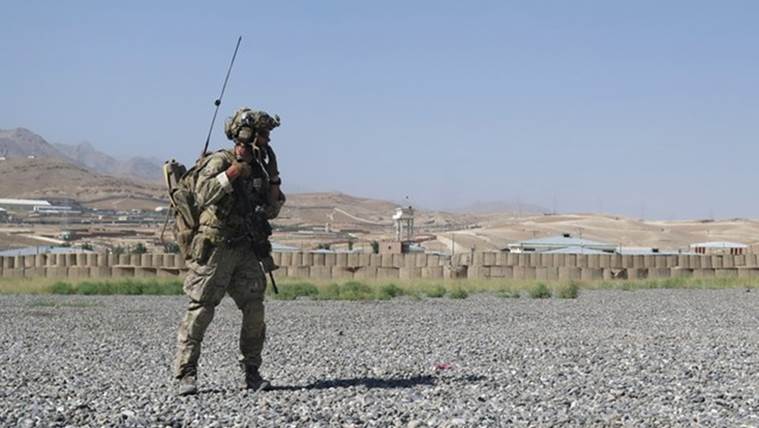 According to western media/think-tank reports, Taliban control almost 50 % of Afghanistan’s territory in addition to having influence/presence in another 20 % of the areas of the war-torn country. Afghan National Army (ANA) and police have been infiltrated by the insurgents while desertions and casualties have taken their toll on the beleaguered security forces. ANA is unable to hold fast against the ever-increasing Taliban assaults in South, East, and West of the country.

US and allied forces stationed in Afghanistan have also lost the appetite to wage large-scale offensives against Taliban and are now resorting mostly on drone/air strikes on insurgent targets which have resulted in increased civilian casualties across the country. Moreover, US Special Forces are serving as firefighters (providing back up to ANA whenever and wherever required) which have reduced their ability to launch targeted strikes against Taliban leadership.

Afghan Taliban are winning solely because they have a winning strategy which US or Kabul doesn’t have. And this strategy is the hybrid warfare against government forces and its foreign allies.

Meanwhile, the Afghan government is marred by corruption, ineptness, nepotism and poor governance. The populace has lost trust in Kabul’s ability to provide basic facilities such as schools, hospitals, roads, and jobs. Afghan infrastructure is decaying and the surge in violence has forced the people to look towards anyone who can provide them security and a chance for survival. In this case, it’s the Afghan Taliban.

The gravity of the situation inside Afghanistan cannot be summarized in a single article but it is clear that Afghanistan is heading towards the post-Soviet withdrawal era when different warring factions vied for supremacy. In those days, it were the Taliban who succeeded in securing power for themselves. An analysis of contemporary Afghanistan indicates that history seems to be repeating itself. However, this time, it will not be easy for the Taliban to secure Kabul or infiltrate into Uzbek and Tajik heartlands due to the presence of US troops in the country.

Despite President Trump’s announcement of the withdrawal of forces from the country, chances of peace are as grim as in the last 17 years of the US war in Afghanistan (private military contractors will be taking over from the US military).

Now the question arises: how did the Taliban manage to turn the tide of this war of attrition in their favor? Many would argue that it is due to the ‘foreign support’; however, this might not be the complete truth. Afghan Taliban are winning solely because they have a winning strategy which US or Kabul doesn’t have. And this strategy is the hybrid warfare against government forces and its foreign allies.

Taliban also acquired state of the art communication devices which enabled them to surround and attack immobile foreign troops in their bases without the fear of being detected.

Hybrid warfare may be defined as a war in which adversaries simultaneously and adaptively employ a fused mix of conventional weapons, irregular tactics, terrorism, and criminal behavior in the battle space to obtain their political objectives….directed and coordinated within the battle space to achieve synergistic effects in the physical and psychological dimensions of conflict.

Soon after the Taliban were dislodged from power after the US invasion of Afghanistan, its leadership pledged to learn from its mistakes. The insurgents recognized that they have no fighting chance in frontal battles against the mighty US Army and resorted to the classical guerrilla warfare tactics. Initially, asymmetric combat wasn’t enough to ring alarm bells in pro-US Kabul or Washington. The US which by that time was stuck in the Iraqi quagmire wasn’t interested in Afghanistan and the insurgents slowly regrouped and surfaced in Pashtun heartlands in the south of the country.

Taliban during the period of 2005-2008 devised a strategy to avoid attacks on foreign troops and launched concerted campaigns against ANA and police. This strategy paid off since government forces quickly retreated from large swaths of territories and the coalition forces had to move in to fill the vacuum. The presence of foreign troops who were alien to Afghan culture and traditions were resented and despised by common Afghans.

Moreover, due to the increased policing and holding of territory by foreign forces, a need was felt to surge troop presence in the country. President Obama, who wined down Iraq war, announced a troop surge in Afghanistan. During his speech, while announcing this decision, he pledged that the US would be focusing primarily on winning the hearts and minds of the people. Little did he know that this very decision would have the opposite effect.

A small strategic decision by the Taliban turned the tables in their favor. Iraqi insurgents had successfully used Improvised Explosive Devices (IEDs) against US troops in Iraq while snipers further limited the mobility of troops.

As soon as the foreign forces moved in to capture territory for the Afghan government, they came in direct contact with Afghan Taliban who until than avoided pitched battles against coalition troops. This presented the biggest challenge for insurgents who did not possess the weaponry to penetrate the thick armor of state of the art vehicles of foreign forces or to communicate with each other without being detected.

A small strategic decision by the Taliban turned the tables in their favor. Iraqi insurgents had successfully used Improvised Explosive Devices (IEDs) against US troops in Iraq while snipers further limited the mobility of troops. The Afghan Taliban decided to launch their own version of ‘IED war’ on coalition troops.

The roads leading to and from US and British outposts in rural areas were rigged with IEDs. In some cases, an IED was planted after every hundred meters sometimes extending for miles. This resulted in a drastic increase in casualties and radically limited the mobility of foreign troops. Taliban also acquired state of the art communication devices which enabled them to surround and attack immobile foreign troops in their bases without the fear of being detected.

Read more: Repercussions of US withdrawal from Afghanistan

Troop patrols were also ambushed with an increased ferocity which discouraged them to venture far away from their outposts. Hence, significant areas were left out of the reach of coalition forces which enabled the Taliban to establish their bases there. The motionless coalition troops were now unable to support ANA and Afghan police who were left at the mercy of Taliban forces who picked them off one by one.

Taliban also took a deep interest in the prospect of launching ‘terrorist attacks’ deep inside the enemy territory. A small group of ‘Fedayeen attackers’ were sent to Kabul, Jalalabad and other major cities and the casualties among security forces and civilians rose considerably.

Increased casualties among foreign troops led to a drawdown of foreign forces in the country and the vacuum left by them enabled Afghan Taliban to launch ‘conventional attacks’ on major cities such as Kunduz.

Meanwhile, the Taliban launched their state of the art media cells which filmed many attacks on coalition and Afghan forces and launched their own ‘information war’. This info war was effective enough to discredit the Afghan government in the eyes of the general public.

Increased casualties among foreign troops led to a drawdown of foreign forces in the country and the vacuum left by them enabled Afghan Taliban to launch ‘conventional attacks’ on major cities such as Kunduz. Although such attacks were beaten back it exhibited Taliban’s ability to launch large-scale assaults which they were considered incapable of.

Taliban have now consolidated control over large areas of the war-torn country and have established courts, schools, markets and police force to govern. This state within a state in Afghanistan exhibits Taliban’s ‘political and administrative’ prowess which seemed a dream only a few years ago.

Read more: How should Pakistan Respond to Regional Hybrid War against it? Russian…

In December 2018, the US government is finally on talking terms with the Afghan Taliban. The Afghan government has also budged to Taliban pressure and is now more than willing to negotiate an end to 17 years long war.

Taliban are surely winning the war of attrition in Afghanistan. Taliban simultaneously employed conventional, non-conventional, irregular, informational and political components to weaken and ultimately cripple the enemy’s ability to defeat them. This fusion of different components is the Taliban hybrid war which brought a superpower to its knees and weak state to its demise.

How US coerced Pakistan into war on terror

The War in Afghanistan: Curtains without Climax