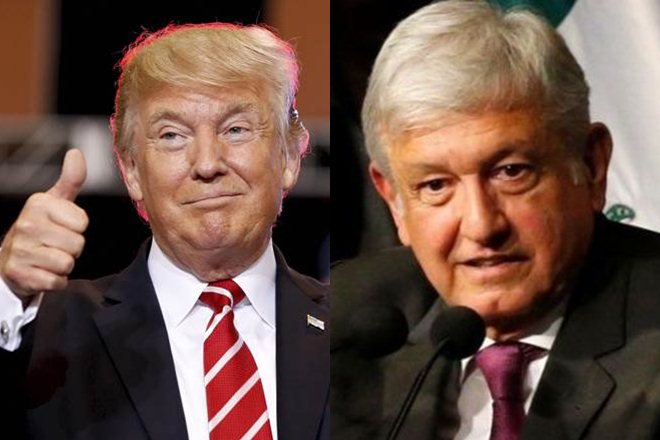 Top officials from US President Donald Trump’s administration met Friday with Mexican President-elect Andres Manuel Lopez Obrador, with both sides upbeat on the potential for a turning point in the countries’ troubled relationship.

Secretary of State Mike Pompeo led the high-level delegation to meet the leftist leader known as “AMLO,” who will take office on December 1 after winning a landslide election victory.

Pompeo was all smiles as he met Lopez Obrador on the leftist’s own turf — an aging Mexico City house with scant security where his transition team has its offices.

“It was a priority for me to begin building our relationship with him and his team.”

“It was a frank, respectful and cordial dialogue. It was a successful first conversation,” he told a separate press conference.

“I believe we can be reasonably optimistic that Mexico will be able to find a basis for understanding and have a better relationship with the United States.”

There was heavier-than-usual security outside the house. Swarms of journalists were kept at bay, along with a handful of anti-Trump protesters who shouted, “Racists! Cowards!” at the US delegation.

Putting Trump ‘in his place’?

US-Mexican relations have been strained since Trump won the 2016 presidential election after a campaign laced with anti-Mexican insults, attacks on the North American Free Trade Agreement (NAFTA) and vows to make Mexico pay for a wall on the common border.

Since then, US tariffs on Mexican steel and aluminum, Trump’s “zero-tolerance” policy on undocumented immigrants, and Pena Nieto’s two abrupt cancellations of visits to Washington have only added to the tension.

Lopez Obrador, 64, pledged during the campaign to “put (Trump) in his place.”

But both men say they had a positive phone call the day after Mexico’s July 1 election, and Lopez Obrador has invited Trump to his inauguration.

Some commentators have drawn parallels between the Republican billionaire and the Mexican leftist, despite their ideological differences: both are free trade skeptics who mobilized a disgruntled base with anti-establishment campaigns.

Trump has even reportedly taken to calling Lopez Obrador “Juan Trump” in private.

Lopez Obrador’s arrival gives both countries an opportunity to “take this moment when there’s a chance for change and revisit the relationship,” said Carin Zissis, a Mexico specialist at the Americas Society and Council of the Americas.

However, she added, “we all know that the Trump administration is unpredictable… All it takes is an angry tweet at 6:00 in the morning and everything appears to be undone.”

Ebrard said Lopez Obrador had presented the US delegation with a comprehensive plan to improve relations.

The future foreign minister — who worked on Latino get-out-the-vote campaigns on behalf of Trump’s 2016 election rival Hillary Clinton — said the plan touches on what Lopez Obrador sees as the four key issues in the relationship: trade, economic development, migration, and security.

The talks did not broach the touchy subject of Trump’s border wall, he said.

Migration is a particularly sore spot at the moment.

President Pena Nieto’s office said he had “expressed his concern over the policy of separating migrant families… (and) asked the Secretary of State to ensure that families separated at the border are quickly reunited.”

But migration may be one area where Trump and Lopez Obrador can find common ground.

They both want higher Mexican wages, and “AMLO” has spoken of fostering economic development in Mexico and Central America so that “people only migrate if they want to, not because they have to.”

The two sides meanwhile sought to be positive on NAFTA.

Pena Nieto said they had agreed to continue working “constructively” to renegotiate the 1994 deal.

The US delegation was informed that Lopez Obrador’s team would participate in any NAFTA talks during the transition period, Ebrard said.