The first direct talks among the main parties to the conflict – the Afghan government, Taliban, and the United States – are in violent agreement about the need for a peace process. Unless the United States withdraws, the Taliban will be unable to gain an outright victory as they did in 1996.

Editor’s Note: Earlier this year, an article in the Daily Beast revealed that Col. Chris Kolenda, Pugwash Secretary-General, Professor Paolo Cotta-Ramusino, and retired Ambassador Robin Raphel, who has significant experience in South Asia, had been part of quiet informal diplomacy efforts that had been talking to the Taliban. A process that finally led to Alice Wells, Principal Deputy Assistant Secretary for the Bureau of South and Central Asia Affairs, meeting with the Taliban in Doha on July 23, 2018.

The first direct talks the US government has officially had with them in seven years. The main parties to the conflict – the Afghan government, Taliban, and the United States – are in violent agreement about the need for a peace process. Unless the United States withdraws, the Taliban will be unable to gain an outright victory as they did in 1996.

The Afghan government, on the other hand, has been unable to win over areas contested or under Taliban control. Such areas now constitute roughly half the country. While Taliban retains domestic support in Afghanistan and sanctuaries in neighbouring countries, the Afghan government will be unable to force the Taliban’s surrender.

The roiling conflict would make present-day Syria look tame in comparison. The repercussions would be significant and lasting.

This is a strategic stalemate. Ambassador Zalmay Khalilzad, the Trump administration’s Special Advisor on Afghanistan, has begun to energize a peace process. Afghan political elites are beginning to add their voices to the need for peace. Diplomats must find the right mental framework to shape and communicate the process.

2018 has been the year of signalling. On February 14, 2018, the Taliban issued an unprecedented statement calling for talks with the United States to end the conflict. The group identified – what they believe to be US interests [counter-terrorism, legitimate government, and counter narcotics] – and criticized America’s efforts to achieve them.

Remarkably, they then explained that they had no objection to US aims and were willing to help advance them as well as human rights. Two weeks later, Afghan President Ashraf Ghani presented the Taliban with an offer to begin talks in Kabul.

The Afghan government, on the other hand, has been unable to win over areas contested or under Taliban control. Such areas now constitute roughly half the country.

The United States lauded the Kabul process speech as the most generous offer to the Taliban to date. An international meeting in Tashkent, Uzbekistan, a month later, reaffirmed support for President Ghani’s offer. Once appointed as Special Advisor, Ambassador Khalilzad has moved aggressively to energize the effort.

He has had two sets of meetings with the Taliban in Doha and the Afghan government in Kabul. Instead of single-day engagements for a couple hours, as occurred in the past, Khalilzad seems to be meeting over the course of a couple days.

Understandably, many Afghanistan watchers and Afghan political figures have been sceptical or dismissive. Forty years of conflict create scar tissue that is not easily cut away. Perverse incentives may also motivate actors to undermine the process.

Talking past one another

The Taliban view the conflict as primarily between themselves and the United States, with Afghan forces as proxies. Hence, they believe that any legitimate peace effort must begin with a US-Taliban arrangement. The US could rubbish any peace agreement, they argue, like occurred in 2001.

Besides, an agreement with the Afghan government will not solve the “foreign occupation” that they view as the heart of the conflict. Without such an arrangement, they fear, the US military could target Taliban leaders going to talks.

Instead, they believe, the Taliban will delay and prevaricate until foreign troops leave, then go for military victory again. They insist that the Taliban and the Afghan government reach a political settlement first. Taliban and pro-government interlocutors suspect the United States stirs up the conflict to justify keeping troops in Afghanistan for certain geopolitical reasons – like containment of China, Russia, and Iran.

In this formulation, the U.S. is the main obstacle to peace. A potential way forward is a “conditions-based” withdrawal of US forces. Since World War 2, the United States has not kept troops in a peaceful foreign country without that country’s permission. Affirming this principle could be an important step forward.

Another cause of delay has been the vain hope of fracturing the Taliban. The idea is very attractive – gain the defection of Taliban leaders to the Afghan government and thus avoid politically difficult negotiations. However, I learned as senior adviser to ISAF commander General Stanley A. McChrystal, the assumption that the Taliban leaders would choose defection over sticking together was simply wrong.

The Taliban is not a hodge-podge of “upset brothers,” but rather a movement that has, for them, a compelling identity. To be sure, the Taliban is fractious. This is part of the reason that their only real political ideology is unity (they call it the prevention of fitna — internal strife). They make decisions by consensus — a traditional Afghan approach.

Forty years of conflict create scar tissue that is not easily cut away. Perverse incentives may also motivate actors to undermine the process.

This gives them a strong status quo bias but also prevents major blowups. Their fractiousness and strong sense of identity co-exist. Efforts to encourage significant defections have thus gained nothing but a longer war.

The Onion is Rotting

The “onion” is a longstanding analogy for an Afghan peace process. In this concept, the Afghan government – Taliban talks are at the center. Once an agreement is reached, the United States and others must encourage the outer layers, Afghanistan’s neighbours and international actors, to get on board.

This is fundamentally flawed and may be fatal to a peace effort. To be sure, any internal political settlement in Afghanistan must be Afghan-owned and led. The problem is that the conflict is not simply a national one among Afghans. It is also a regional and international one. 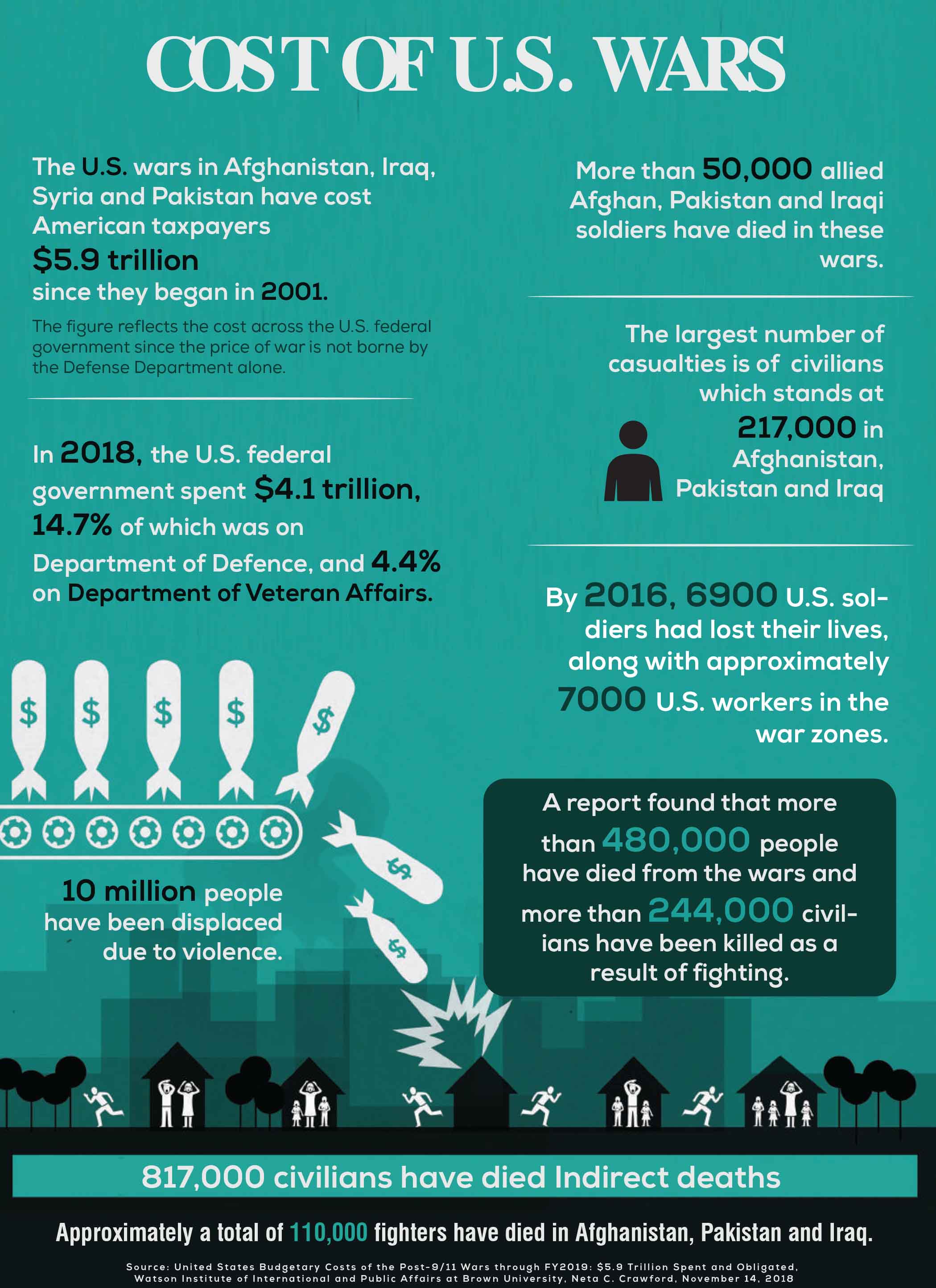 Regional and international rivalries play themselves out in Afghanistan. Chief among these are India-Pakistan; Iran-Saudi Arabia, and Russia-NATO. Regional actors influence myriad factions within the war-torn country. They do so for reasons vastly different than why the Taliban and Afghan government fight. Some of these proxy-battles are violent, others yet-to-be-violent.

International actors, such as the US, Russia, China, Saudi Arabia, and others have competing or conflicting interests in Afghanistan that also exacerbate the conflict. An agreement between the Afghan government and the Taliban will not resolve these regional conflicts.

In fact, regional and international actors are highly likely to play spoiler roles if talks between the government and Taliban are perceived to move in a direction detrimental to their interests. Fixation on the Taliban talks creates blind-side risks.

Read more: The War in Afghanistan: Curtains without Climax

A realistic peace process must advance an internal political settlement between the Afghan government and the Taliban and a political settlement among Afghanistan and its neighbours. These two inter-related processes must be coordinated. International guarantees, particularly from the United States, Russia, and China will be needed to make the agreements durable. Imagine a smiley emoji.

The “onion” is a longstanding analogy for an Afghan peace process. In this concept, the Afghan government – Taliban talks are at the center.

The eyes represent the two political settlements; the mouth symbolizes the coordination. The outline of the face is the international guarantees. This analogy risks coming across as glib but more effectively conveys the complexities for a durable peace. Shuttle diplomacy can work toward agreed agendas for negotiations and facilitate basic confidence-building measures.

The process could then move toward reductions in military activities and a general cease-fire. As a cease-fire holds, talks can move toward the political settlements and international guarantees. The Trump Administration appears to have a sense of urgency about peace. This is helpful as long as it does not turn into Obama-like timelines that undermine incentives toward peace.

Spoilers and blockers are already attempting to derail a peace process. The cost of continuing along the current path is the growing likelihood of Afghanistan becoming the next Syria. Pro-government and Taliban interlocutors have expressed this very grave concern. The longer this conflict goes, and the more external actors agitate their proxies, the greater the likelihood becomes.

Given the already seething political and ethnic tensions within Afghanistan, it would not take much for violence to spiral out of control. Imagine, for instance, an external actor mobilizing a social media troll farm to undermine the 2019 Afghan presidential elections.

If the powder-keg atmosphere surrounding the disputed 2014 elections is any guide, inflaming tensions via social media (increasingly prevalent in Afghanistan) could set off violence among Afghan factions. The roiling conflict would make present-day Syria look tame in comparison. The repercussions would be significant and lasting.

The $45 billion annual price tag for the United States and over 10,000 Afghan civilian casualties each year should be motivation enough for the Trump Administration to make a common-sense move toward peace. A properly organized peace process could reduce the risk of external meddling. It will also ensure a durable outcome that respects the service and sacrifices of Afghans, Americans, and those who have sacrificed so much for lasting peace.

Colonel (Ret.) Christopher D. Kolenda, Ph.D., a former battalion commander and senior adviser to three 4-star commanders in Afghanistan, fought the Taliban as a commander in combat and has engaged them in high-level diplomacy.

Previous articleBeyond the Glitzy Skyscrapers? Nationality, Citizenship, and Class in Dubai
Next articleHow Pakistan was ‘Created & Lost’: A journey of ‘Blood & Tears’

Rida Hussain - 27 January 2022
MQM-Pakistan, like other parties, had been protesting against the Sindh Local Government Act 2021. However, no serious attempts had been made by the Sindh government to engage with the protestors.

Sexual harassment now a crime in US military

27 January 2022
Previous articleBeyond the Glitzy Skyscrapers? Nationality, Citizenship, and Class in Dubai
Next articleHow Pakistan was ‘Created & Lost’: A journey of ‘Blood & Tears’

China warns US over Ukraine

EAG welcomes focus on economy, cautions on overstretch of NSP

Sheikh Rasheed says Opposition will be humiliated on 23rd March

Why Jadhav became so important for India? – Dr Moeed Pirzada