The Indo-Pak partition could have been averted if Jinnah became the PM of undivided India: Dalai Lama 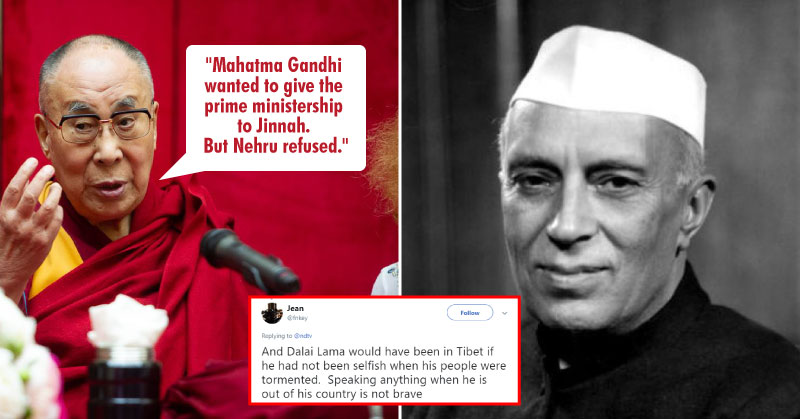 The exiled Tibetan leader believes the Indo-Pak partition could have been averted if Mohammad Ali Jinnah became the first prime minister of undivided India and not the self-centered Jawahar Lal Nehru.

He added that Pandit Jawahar Lal Nehru was gifted with experience but mistakes do occur. He said had Jawahar Lal Nehru not being self-centered India and Pakistan would have been one country. He passed the statement in response to a question asked by a student about how to be self-assured after taking any decision in life.

“Mahatma Gandhi wanted to give the prime ministership to (Mohammad Ali) Jinnah. But Nehru refused. He was self-centered. He said, ‘I wanted to be Prime Minister’. India and Pakistan would have been united (had Jinnah been made Prime Minister at the time). Pandit Nehru is very experienced. But mistakes do happen,” said Dalai Lama during an interactive session in Goa.

“I think it was a little bit self-centered attitude of Pandit Nehru that he should be the prime minister. India and Pakistan would have remained united had Mahatma Gandhi’s thinking materialized,” he said.

Dalai Lama also added that the ultimate responsibility to take the decision is upon one’s shoulder. One should analyze over and over to reach the best decision.

Quaid-e-Azam Mohammad Ali Jinnah, Pandit Jawahar Lal Nehru, and Mahatma Gandhi are the revered political figures in India and Pakistan. The personalities had played a crucial role in driving British out of sub-continent. The history, however, witnessed a mass migration when sub-continent split into-India and Pakistan.

Recently, Uttar Pradesh Minister Swami Prasad admonished the act of BJP for criticizing Aligarh University for displaying the photo of Muhammad Ali Jinnah at the varsity. He called Jinnah ‘a great man’ and said he was a visionary leader and it’s shameful to point out figures on him.

Previous articleECP counters the criticism as it uploads more than 150,000 Form-45 on its website
Next articleWill the PTI-MQM-P rocky relationship survive?

20 September 2021
Previous articleECP counters the criticism as it uploads more than 150,000 Form-45 on its website
Next articleWill the PTI-MQM-P rocky relationship survive?

Article 35A: Who created it, why and how they have turned against it?

Rape cases should not be used for TV ratings: Ahsan Khan