The Legacy of General Waheed Kakar

General Kakar believed in merit. He once rejected Gen Zia's recommendation. Gen Kakar played a decisive role in resolving the constitutional crises in July 1993. He is still remembered in Pakistan with his 'Kakar Model.' This is an interesting piece on the life achievements of Gen Waheed Kakar. 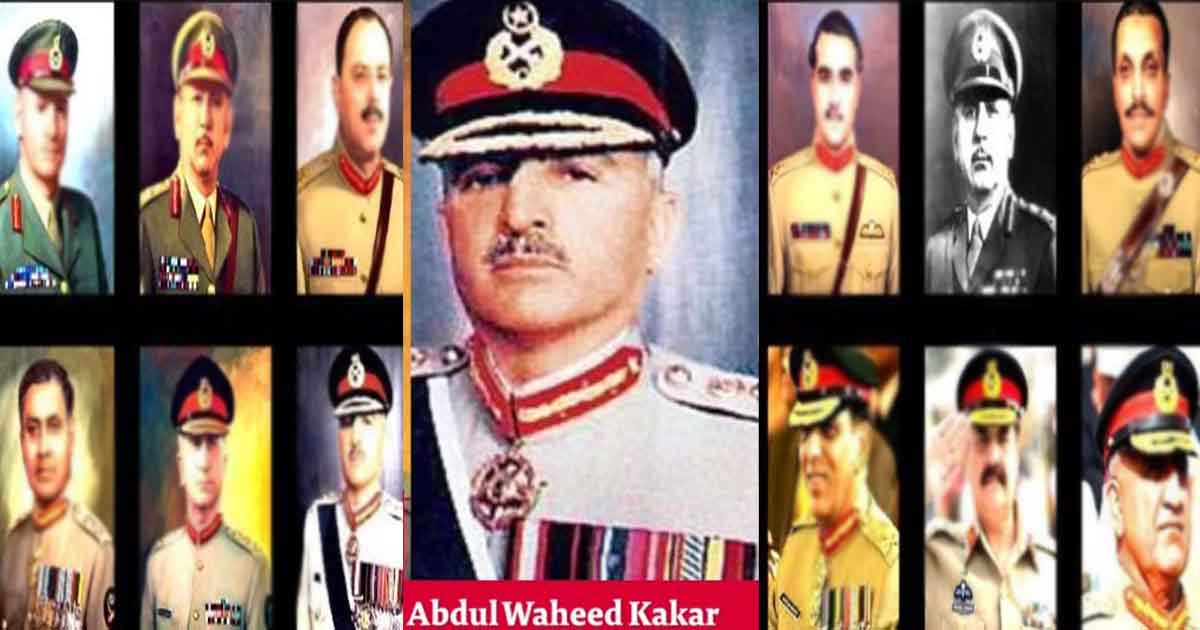 Abdul Waheed Khan was born into a Pashtun family of the Kakar tribe (which originally migrated from Zhob, Baluchistan) in the suburbs of Peshawar on 23 March 1937. Among the founding fathers of Pakistan, his uncle, Sardar Abdur Rab Nishtar, later went on to serve as the Governor of Punjab and as the President of Pakistan Muslim League (PML).

After graduating from a local high school in 1955, Waheed Kakar, as he generally became known, graduated from Edwardes College before joining the Pakistan Military Academy in Kakul in 1956. He was commissioned in the 5th Battalion of the Frontier Force Regiment (5FF) in 1959.

A straight-forward soldier who brooked no nonsense, Gen. Waheed Kakar was a short, stocky and handsome man with an imposing personality. A man of conviction he had the courage to stand his ground on his principles. Numerous examples of this exist throughout his career even before his elevation to the position of COAS.

Read more: A giant among men bravest of the brave: Brigadier Muhammad Taj

One of well-known incidents was when he as Adjutant-General of the Army in 1987-89 refused to admit three students in the Army Medical College, who did not meet the minimum criteria, this despite direct orders from President General Muhammad Zia-ul-Haq. He strongly believed in merit without a personal agenda.

After over thirty years of service in the Pakistan Army, attaining the rank of Lt Gen he was given command of the Corps in Quetta. When he was just about to retire from the Army in the summer of 1993, the then incumbent COAS Gen Asif Nawaz Janjua, another outstanding soldier of great integrity, unfortunately suddenly passed away.

In consultation with the then PM Mian Nawaz Sharif President Ghulam Ishaq Khan promoted him to four-star rank and appointed him Chief of Army Staff (COAS). During the early years of his command of the Army his no-nonsense approach was manifest in his retiring two Lt Gens (a serving DG ISI and former one), when he found their professional activities to be contrary to good order and military discipline.

Mian Nawaz Sharif won the 1990s elections giving him his first term as PM. Once he had consolidated power he tried to strip the President of the power to dismiss the Prime Minister, the National Assembly and the Provincial Assemblies. Faced with that challenge President Ghulam Ishaq Khan pre-empted matters by dismissing Nawaz Sharif in April 1993 under corruption charges and called for new elections in July.

On appealing to the Supreme Court Nawaz Sharif was reinstated as PM. Consequently both the President and PM remained locked for several weeks in a debilitating open political confrontation endangering national security. Their trying to exercise control over the Punjab Assembly almost resulted in armed conflict between the Punjab police and the Rangers.

General Kakar played a decisive role in resolving the constitutional crises in July 1993. This was contrary to the expectations of the President who having appointed the COAS over others considered him to be his man. General Kakar saw both the Head of State and the Head of Govt off calmly and peacefully without using a stick or moving a brigade. His intervention out of “the doctrine of necessity” was contrary to the normal “modus operandi” of the COAS taking over power himself. The COAS stayed well within the Constitution by ensuring the Chairman Senate Waseem Sajjad took over as Acting President. A Caretaker government with Caretaker Moeen Quereshi as PM was formed to oversee free and fair elections.

Read more: Pakistan’s multiple crises: Who will lead the affairs – Executive or Military?

There was one difference in the “Waheed Kakar formula” and the script Gen Moeen followed in Bangladesh in early 2007. In repeated articles at that time I had suggested increasing the period of the Caretaker Regime so as to carry out “across the board” accountability. This was not done by Gen Kakar, he stayed within the 90 day period stipulated by the Constitution for elections. Gen Moeen followed my advice and carried out accountability very successfully in the first year with an even-handed National Accountability Commission, as is our NAB now.

Thereafter he appointed a must corrupt general to hand the Accountability Commission and derailed all the wonderful achievements bringing scoundrels to task in the first year of “the Bangladesh Model”. Accountability must be the touchstone of a neutral govt and if the period elongates, so be it! Can you imagine what could have been achieved in Pakistan if the hardened (and considerably enriched) rascals being persecuted today had been held accountable 27 years ago in 1993?

Not a single person in Pakistan ever challenged Gen Waheed Kakar’s act in the courts, such was the respect for Kakar and the Pakistan Army. No martial law was proclaimed and the COAS adjusted the wording of the law with the spirit of the law and helped civilian rule to stay and get back on track.

Mian Nawaz Sharif won the 1990s elections giving him his first term as PM. Once he had consolidated power he tried to strip the President of the power to dismiss the Prime Minister, the National Assembly and the Provincial Assemblies

Commenting about Gen Waheed Kakar one of the leading politicians from Balochistan said, “this is not a General from the Sandhurst colonial brand. I welcome an enlightened man from the rigid mountain ranges of Loralai. He has the professional skills for improving the war performance of the Pakistan Army. But more than that, he is intelligent enough to comprehend politics and will promote the democratic process”.

Many general officers before 2010 did not take active part during either the 1965 or 1971 wars or the Balochistan insurgency, today our entire senior military hierarchy has seen combat in various campaigns in different ranks in counter-insurgency operations during the last two decades. For his part Gen Waheed Kakar served as a rifle company commander with 3 FF in the Chawinda Sector of Sialkot in 1965, and was BM of a Brigade in the Sulemanki Sector in 1971, both areas of major combat operations.

Having ensured free and fair elections that saw PPP come to power, for the years she was in power as PM, Ms Benazir visibly displayed the utmost respect for the COAS and regularly asked him for advice. In September 1995, General Abdul Waheed Kakar again played a crucial role in sustaining democracy when a group of army officers plotted to assassinate him and Benazir Bhutto to capture power. This was foiled by the ISI and the MI.

In 1996, at the end of his tenure, General Kakar was asked to continue in office for another three years, not only by than President Leghari and PM Ms Benazir but by all sections of the population. Before the general declined the extension, he asked for advice from his Corps Commanders, most of advised him to accept the request. However two of his most trusted and close colleagues advised him not to take extension. After his retirement, he has very seldom appeared in public and lives a very quiet life in Rawalpindi. Whenever he does appear in public, there is a long line of people eager to greet him.

What makes General Kakar a model was his tacit conviction that a state can only function when the people serving it – military and civilian alike- are well-educated, well-groomed and attained their position, whatever it is, by merit and honesty only. Soldiers have to serve their country wherever they are needed to the best of their capacity and go home when their tenure is over not allow any relations or close friends and associates to use his office for personal gain or manipulation.

Paraphrasing Samuel P. Huntington’s writings in The Soldier and the State, the civilian control was considered ideal as “the proper subordination of a competent, professional military to the ends of policy as determined by civilian authority”.

National leaders with limited experience in military matters often have little choice but to rely on the advice of professional military commanders trained in the art and science of warfare to inform the limits of policy; in such cases, the military establishment may enter the bureaucratic arena to advocate for or against a particular course of action, shaping the policy-making process and blurring any clear cut lines of civilian control.

Certainly they should not use their office to enrich themselves beyond imagination. He should certainly should not have a personal agenda, not pursue any personal motivated policy nor have any other pride or ambition than that.

The moral standing that Gen Waheed Kakar has inculcated by his example must be developed among both present and future soldiers and bureaucrats alike. The governance of any country is a civilian task and Pakistan is served best by a soldier staying true to his calling except when the country is in danger, that is “the Waheed Kakar Model”! For those who have worn the uniform, it is a matter of pride that this outstanding soldier practiced to perfection what he stood for throughout his life.

Iran at the crossroads: Internal challenges vs. Regional ambitions

Coronavirus: What really caused its emergence & what would be its aftermath?

UAE-Israel deal: A betrayal of the Palestinian people?