As Azaadi March reached its climax on Sunday night following the end of the deadline for PM Khan’s resignation. His hilarious reaction on the question of COAS’s resignation left social media users amused. 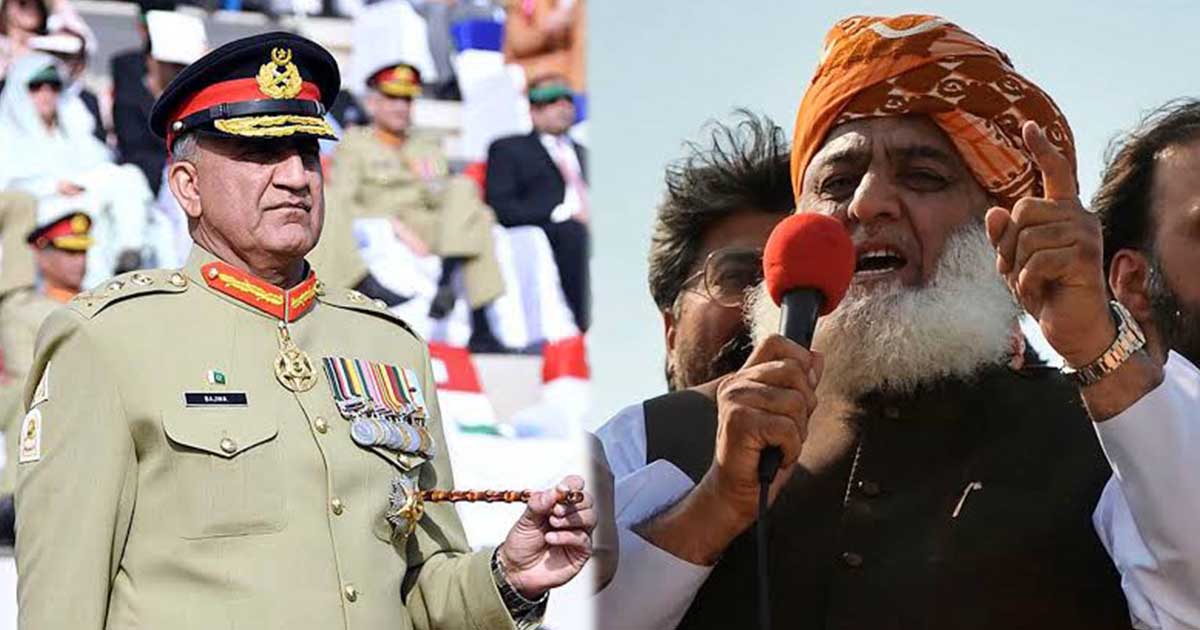 He, however, did not identify as to whom he asked to resign besides PM Khan, which fuelled speculations among people of his purported demand from COAS to resign. People were predisposed to believe he asked for COAS Bajwa following JUI-Fs repeated allegations against the state of rigging in elections and interference in the civilian matters of the country.

Maulana Fazl was left perplexed when a female journalist from Independent Urdu asked his strategy on his alleged demand of COAS’s resignation. He denied the rumours that he demanded COAS resignation asserting that it is not on their agenda.

People mocked JUI-F leader Maulana Fazl-ur-Rehman’s reaction on the question asserting that Maulana has failed miserably to sustain the momentum of Azaadi March and achieve any political gains. Social media users mocked Maulana Fazl for looking petrified with the question, asserting that he feared to mess up with the state institutions.

Maulana Fazl-ur-Rehman’s indirect verbal onslaught on the armed forces of Pakistan prompted the reaction from DG ISPR Asif Ghafoor on Friday, who in his media talk with ARY News had forthrightly denied partnering with anti-government forces, and asserted that armed forces stands in unity with the democratically-elected government and will play the role to save democracy in Pakistan.

DG ISPR had also asked Maulana Fazl to plainly assert the name of the institutions whom he alleged for conspiring his defeat in elections. It is pertinent to remember that not only Maulana Fazl had threatened the current government but also the state institutions with his alarming assertions that the demonstrators would swarm the PM House to arrest premier if he failed to resign within two days.

Meanwhile, in his latest speech on Sunday, he retracted from his plan to march towards D-Chowk but spread countrywide protests against the government. DG ISPR rejected the allegations of Maulana Fazl-ur-Rehman of Pakistan Army allegedly manoeuvring the election results. He asserted that Pakistan Army played its constitutional responsibilities in the general elections, and he must reach the concerned state authorities for his suspicions over election results.

When asked to comment on DG ISPR’s statement, he asserted that he expressed his views to an anchorperson, however, JUI-F does not want confrontation with state institutions.

Calling Spade a Spade: Maulana Fazul Rehman made it clear that “seeking Army Chief’s resignation is not part of his demands.” @mona_qau calls shot. 👍

The look of absolute horror on Maulana’s face when asked if the Army Chief’s resignation is amongst his demands 😱 (1.35) https://t.co/CfMfyFRiYR

Saudi Arabia imposes restrictions on use of loudspeakers in Mosques

Threat of Nuclear Arms Race: Europe must control it – France