The madness behind “Paragraph 66”

The words used to convey the verdict made many wonder, are we still living in medieval ages? Is this a justified approach where there is no law to publically hang the rapist and murderer of 10 months old but the same law allows it when you want it to? 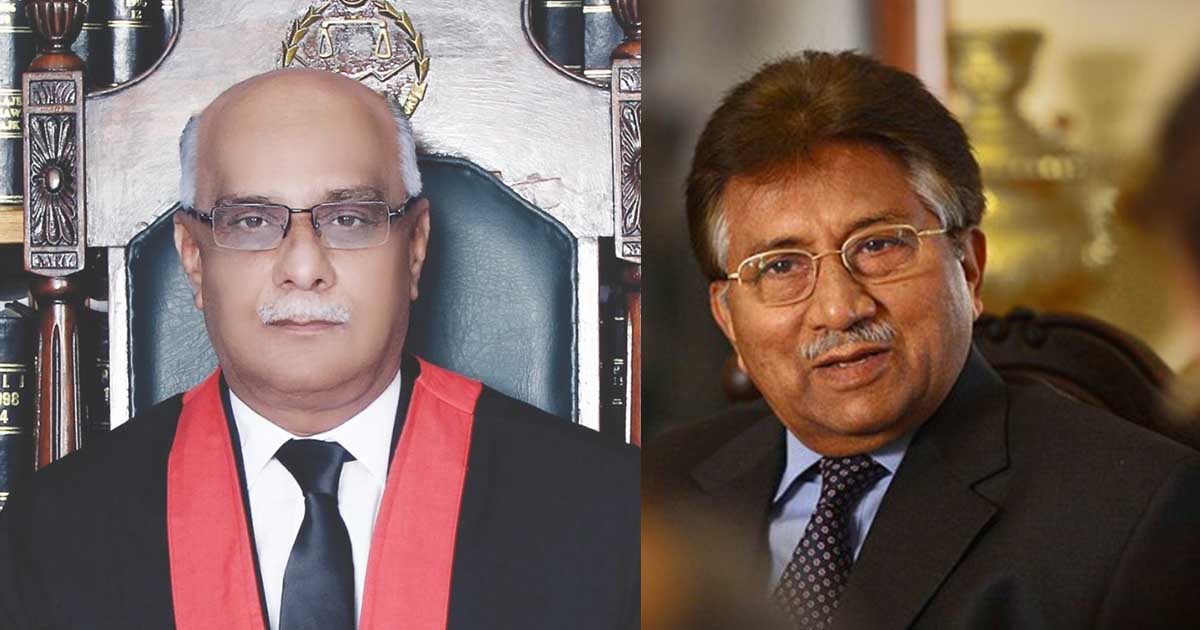 “We direct the law enforcement agencies to strive their level best to apprehend the fugitive/convict and to ensure that the punishment is inflicted as per law and if found dead, his corpse be dragged to the D-Chowk, Islamabad, Pakistan and be hanged for 03 days,” wrote Chief Justice of Peshawar High Court, Waqar Ahmad Seth, while sentencing former military dictator, Pervez Musharraf, to death. Musharraf subverted the constitution and he deserved to be trialed under the law. However, the wording of the Special Court’s order, authored by a senior judge, is reflective of a particular mentality, certain cultural settings and peculiar intellectual currents of the age.

This piece is an attempt to explore the origins of violence, inhumanity, and stagnation in Pakistani society where ‘extraordinary’ deviations or crimes are considered to be worthy of ‘exemplary punishments’. I attempt to focus on how structural conditions produced dictators like Musharraf and Judges like Waqar Ahmad Seth J.

The terrible fact is that many in the country believe women themselves are responsible for rape or harassment they had to face. A study carried out by Anila Kamal, Irshad Ali Shaikh and  Masood Ali Shaikh revealed some disturbing trends. “Male [university] students were more likely to believe that the strong character of a woman would ostensibly shield her from the advances of a rapist; only young and pretty women get raped; woman’s willingness is present in rape. About 25% of students also believed that a raped woman is not worthy of becoming another man’s wife. One-third of students believed that there could be no rape in the marital context,” the study concluded.

Shockingly, reported cases of child abuse increased by 11 percent in the year 2018 compared to 2017, with more than 10 children suffering some form of abuse every day in Pakistan last year.

Besides, extrajudicial killing, missing persons and inhumane treatment given to them, Model town tragedy, Sahiwal massacre and recent deadliest attack of lawyers on a hospital are the ugliest expressions of collective or institutionalized violence in Pakistan.

Why has violence become the norm in Pakistan? Why are cases of gang-rapes and molestation of children rampant in this country in the 21st century?

What went wrong in Pakistan?

Misinterpretation of religion, an inherent sense of rejection to modern education and violence being committed by the state and non-state actors within Pakistan have created a culture that not only encourages violence but also, in many instances, approves it as a justified way of restoring honor. This is where the problem lies.

Waqar Ahmad Seth J. is representative of our society where killing a man or woman is considered justified if he/she caused dishonor to the family, stole money or issued indigestible statements against a particular segment of this society.

There was a golden time in history when Muslim societies were home to original thinking and fresh ideas. Interestingly, a knowledge-friendly society does not only ensure peace and order but also produces the greatest minds of the time. So did the Muslim societies from the 9th to 12th centuries. However, political instabilities, misinterpretation of religion and deliberate attempts to confuse independent thinking with so-called anti-Islam movements led to the creation of ossified sociopolitical institutions and overreaching cultural stagnation. This was the end of intellectual evolution in the Muslim world.

The rise of reason and believe in science helped creating a new civil society based upon the principles of individual freedoms and constitutionalism. This did not happen overnight

In the contemporary world, no Muslim state is a substantive democracy. Turkey, Indonesia, and Pakistan may claim to be democracies but these states are the perfect epitome of competitive authoritarianism or what can only be called procedural democracies. None of the Muslim countries has a western-style liberal democracy where human rights are protected and ruling elites are accountable for their every action.

Theoretically speaking, one way of differentiating early-middle ages from the modern and post-modern era in the history of humankind is the way individuals established a legal system to protect their collective conscience. Within the legal system, one’s level of civility and cultural development can be measured the way they treated ‘criminals’, men and women who dared to break the collective moral order.

Unfortunately, human beings had the most inhumane retributive justice system which suggested crucifixion, using rats to kill people, the breaking wheel, impalement, rape by wild animals common during the roman empire) and boiling to award capital punishment to the convicts. The rise of reason and believe in science helped to create a new civil society based upon the principles of individual freedoms and constitutionalism. This did not happen overnight. The present-day human civilization is the result of complex historical processes and political evolution.

Public intellectuals, civil society, and academia in Pakistan are expected to ponder upon the causes of structural violence in Pakistan which is producing jurisprudence like paragraph 66. Pakistan, a Muslim majority state, has to realize that the 21st century is quite different from the middle ages of Europe. This is the age of modernity where inhumane treatment to criminals cannot be justified under whatsoever circumstances. Pakistan evolves and becomes a part of modernity.

Farah Adeed is an Assistant Editor in GVS. The views expressed in this article are the author’s own and do not necessarily reflect Global Village Space’s Editorial Policy.