The rise of the right wing – Muslim Society in jeopardy 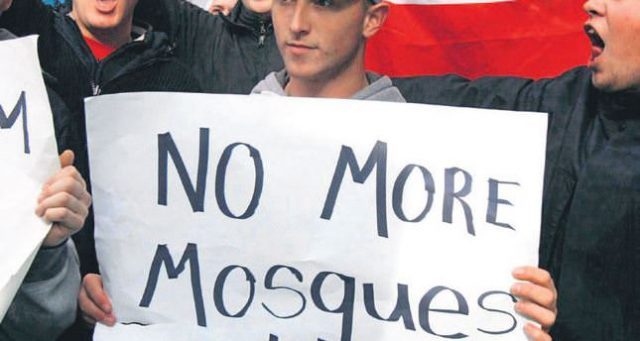 There is very famous saying by Muhammad Ali, the boxer,

Terrorist claim they are following Islam –  Killing people, blowing up people and dropping bombs in places. This is not the way to spread the word of Islam. Some people now believe that all Muslims are not terrorist.

There is no concept of morality in international relations. International politics is changing and the right wing political parties are coming into power. The extremist ideology is engulfing international political environment. The U.S President Donald Trump is tweeting anti-Muslims videos. Further to this, slogans like “Britain first” and “punish the Muslims” in Europe have serious consequences for other communities. The ‘Muslims’ question is central to the politics of the far right, which has achieved unprecedented success since World War II up until now –  from France to the Czech Republic via Austria and Germany.

Mar Le Pen, (candidate for French presidential elections) leader of the far-right National front of France has made her answer clear; she decried Islamist globalization which she called an ideology that wants to bring France to its knees. In this situation, political negotiations are in dire need of the time to defeat extremism from the face of the world as the world is dividing in different blocks. There is a negative perception against the West and the U.S in Asia. In the West, there is negative perception against Asia especially against Muslims that needs to be changed.

Anti-Muslims campaign against Muslim societies in UK and in some other European countries depicts the attitude of western countries against Muslims. Muslim females are being forced to abandon their clad. Muslim countries should stand against these discriminations.

There should be a difference between an innocent person and a terrorist. On April 3rd, the Afghan Air force attacked a Madrassa in Kunduz, Afghanistan. There are reports that dozens of children’s under the age of 14 were killed while the Afghan Defense Ministry denied any civilian causalities and labeled the news as fake. The killing of innocent children is completely unacceptable and unjustifiable. There are anti-Muslims’ elements present in the West who are attacking Muslims. Muslim females are being harassed and forced not to follow their culture. Due to anti-Muslim’s narrative in the West, the Muslim society is deprived of their culture because they cannot follow their customs openly.

The point of concern here is that why are there anti-Muslims’ sentiment in the western society? Why is the Islamic world divided into Shia-Sunni block? Why are the international community and human rights organizations not taking interests in what’s going on against Muslims in the West or the atrocities against the Kashmiri people by the Indian Army? The Indian Army is brutally killing innocent Kashmiri people. Why are international organizations and the self-proclaimed ‘champions’ of democracy muted over the brutality of the Indian forces in the Indian Occupied Kashmir?

International Human Rights watchdogs are not observing the killing of Kashmiri people and are muted on the brutalities of the Indian Army. Even the OIC is not highlighting the issue of the killings of the Kashmiri people. International media, international organizations and other human rights organizations are paying no heed over these issues, which is painful. As a nation, the Muslim world failed to highlight the issue of Kashmir. Literally speaking, we deserve this kind of attitude from the West. Why? Because Muslim countries have divided themselves into different sects like Shea, Sunni and Wahabism.

Mar Le Pen, leader of the far-right National front of France has made her answer clear; she decried Islamist globalization which she called an ideology that wants to bring France to its knees. In this situation, political negotiations are in dire need of the time to defeat extremism from the face of the world as the world is dividing in different blocks.

Western countries, particularly the U.S, are getting benefits from the internal rift among Muslim countries and instigating Muslims against each other. The U.S president Donald Trump, who keeps a negative corner for Muslims, is supporting Saudi Arabia against Iran for their own interest. President Trump even announced an entry ban on some Muslim countries to stop them from entering the U.S. After becoming the President, he is perusing tough policies towards Muslim countries. He stopped the entire security aid of Pakistan which Pakistan was receiving from the U.S for war against terrorism.

President Trump is also thinking to cancel the status of Pakistan as non-NATO ally. He asked his allies to push Pakistan to do more and to destroy the safe havens that exist on the Pakistan-Afghan border. When the international community is pressing Muslim countries, the leadership of Muslim countries are busy blaming each other. The West is united against Muslim; this should be eye opener for all of us. We should unite and stand against conspiracy in future.

Anti-Muslims campaign against Muslim societies in UK and in some other European countries depicts the attitude of western countries against Muslims. Muslim females are being forced to abandon their clad. Muslim countries should stand against these discriminations. They can use some incidents that have occurred for their own interests such as the attack in Afghanistan on children by the Afghan Air force – it is condemnable but on the other side it could have been useful for us to promote our stance and ideology against the Taliban and other terror outfits.

We can tell the Afghan people that Pakistan is not against them and in fact we respect the territorial sovereignty of Afghanistan. Pakistan can easily use this incident against the narrative of the Afghan government before their people. The system of the blame game needs to be changed. Muslims should stand united against any type of aggression. Their ideology should be same on the international and regional issues.

Asad Ali is a freelance Journalist. He is doing his M.Phil in International Relations from Quaid Azam University Islamabad. His area of interest is Political and International Issue. The views expressed in this article are authors own and do not necessarily reflect the editorial policy of Global Village Space.

Previous articleWill Nawaz’s anti-state stance lead to his political suicide?
Next articleGrowing tensions between Syrians and Turks in ‘little Syria’