The Roller Coaster Between Jamat-e-Islami and PTI Ends 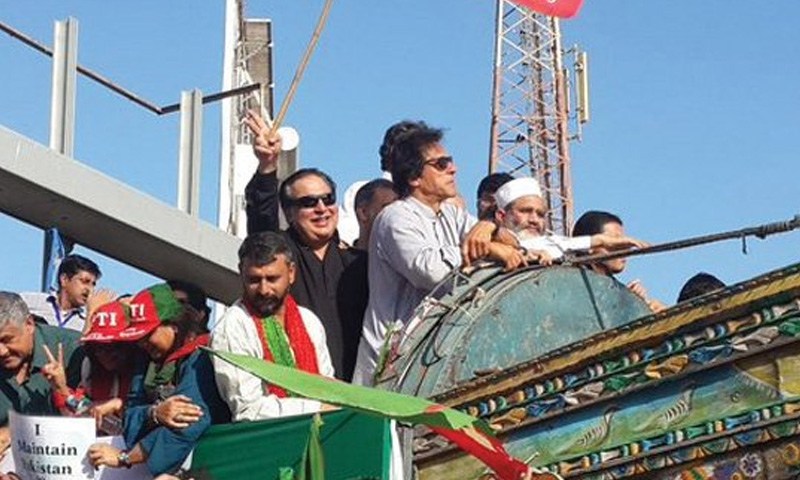 Pakistan Tehreek-e-Insaf’s long-term ally, Jamaat-e-Islami, has decided to part ways with the Khyber Pakhtunkhwa government. This has been done just weeks before the next elections, which would pitch the party against the political rivals.

Mushtaq Ahmed Khan, the provincial party chief stated, on Wednesday, that the decision was made in good faith, a formal announcement of which would be made through a joint press talk with Pervez Khattak, Chief Minister Khyber Pakhtunkhwa.  Jamaat-e-Islami, which has enjoyed the privileges of the provincial government has also clarified that it would not weaken the Khattak government, citing that the decision was made after the revival of Muttahida Majlis-e-Amal (MMA).

JI and PTI adjusted seats before the 2013 elections, the inclusion of JI in MMA rules out any such arrangement in the upcoming elections.

Jamaat-e-Islami was the only party with which, Pakistan Tehreek-e-Insaf sustained alliance for such a long time, after securing victory in 2013 general elections. Though Pakistan Tehreek-e-Insaf also partnered with Qaumi Watan Party,  it ended its alliance with the party over the Panama Case and other corruption charges. Moreover, PTI made an alliance with Aftab Sherpao-led Qaumi Watan Party twice, in 2013 and 2015, however, its partnership with Jamaat-e-Islami continued from day one to this day.

Read more: Maulana Fazl-ur-Rehman to head revived MMA: What does it mean?

Initially, Jamaat-e-Islami was given three ministries, with the most important position of the senior minister handed over to Siraj ul Haq. Siraj, who holds a good reputation in terms of his financial dealings, became a senior minister in the Khyber Pakhtunkhwa government. He presented two budgets, claiming that under his chair, the provincial budget was well maintained. However, he resigned from the assembly after he was elected the Ameer of Jamaat-e-Islami in 2014.

Siraj, again, became a legislator as he took oath as Senator in 2015, with the support of Pakistan Tehreek-e-Insaf’s lawmakers from the provincial assembly. Interestingly, over the Senate elections in 2015, Siraj expressed that most of the Senators were elected on merit, however, for the recent elections, he alleged that ‘the entire stable had been bought and sold’. Siraj also alleged that PTI took orders, from the top in the Senate elections, leading to the rejection of PTI.

Jammat-e-Islami has been in a bittersweet relationship with Pakistan Tehreek-e-Insaf over the course of the last 5 years. At one end, it echoed concerns regarding weeding out corruption from the country, but on the other end, it took a different path, raising suspicions about the credibility of the claims made by the party. Jamaat-e-Islami remained in coalition with the Pakistan Tehreek-e-Insaf-led government for five years, however, held a different opinion against the party on many occasions.

Siraj, who holds a good reputation in terms of his financial dealings, became a senior minister in the Khyber Pakhtunkhwa government.

Interestingly, Zia ud Din Ansari, the candidate of JI in NA-120 bye-polls took only 592 votes whereas, Arbab Amir Ayub, the candidate of Pakistan Tehreek-e-Insaf took over 45,000 votes and was declared successful, with JI’s candidate managing to grab only 7, 000 votes.

Jamaat-e-Islami, which has enjoyed the privileges of the provincial government has also clarified that it would not weaken the Khattak government, citing that the decision was made after the revival of Muttahida Majlis-e-Amal (MMA).

The ouster of Jamaat-e-Islami from the Khyber Pakhtunkhwa government was well expected, owing to its controversial stance in contradiction with Pakistan Tehreek-e-Insaf, However, the allegations regarding the Senate elections proved to be the final nail in the coffin of the alliance. Another reason for the move, which has been quoted officially, was the revival of MMA, a religious group comprising Jamiat Ulema-i-Islam, Jamaat-i-Islami, Jamiat Ulema-i-Pakistan, Tehreek-i-Islami Pakistan and Markazi Jamiat Ahle Hadith.

As Maulana Fazalur Rehman, the arch nemesis of Imran Khan – who is Pakistan Tehreek-e-Insaf’s chairman – was elected the president of MMA in March, the termination of JI’s alliance with PTI was written on the wall. Although JI and PTI adjusted seats before the 2013 elections, the inclusion of JI in MMA rules out any such arrangement in the upcoming elections.

Reas more: Indian journalist attacks Pakistan in the USA: do her words have…

The amalgamation of religious parties might dent Pakistan Tehreek-e-Insaf in Khyber Pakhtunkhwa, however, due to the reduction in the influence of Pakistan Muslim League Nawaz, it might get hold of the centre, for which Imran Khan is trying hard.

If MMA gets elected to KPK and PTI holds reigns of the federal government, Imran Khan might not mind the arrangement. In any case, JI has warned all the other parties that its commitment is never ‘once for all.’

Has PTI MNA Dawar Kundi been expelled from the party?