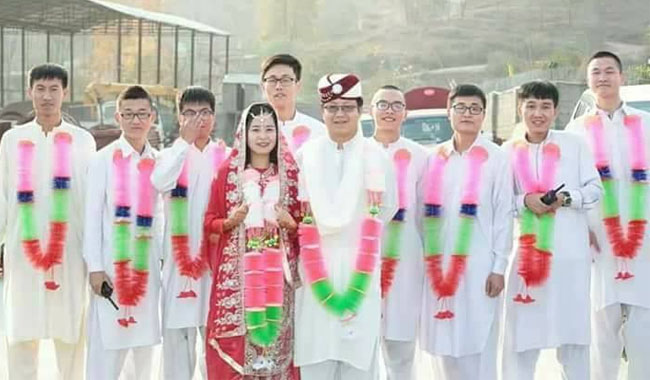 A traditional wedding reception was organized for a Chinese couple in Battagram at the Kuzabanda base camp on Sunday evening.

The groom is a Chinese engineer and is part of the China Pakistan Economic Corridor Project. The couple has been working in Pakistan for the past six months.

The couple Sain and Lin had flown to China a month ago to solemnize their marriage in line with Chinese traditions since Pakistan at the moment lack such arrangements.

The couple than on their return organized a reception for friends and fellow workers in Pakistan. Lin, the bride was dressed in a traditional Pakistani red wedding dress and bridal jewelry. She also applied henna on her hands as per Pakistani wedding traditions. Sain, the groom, graced the reception dressed in a white sherwani and a Qula.

The other participants of the ceremony, including other Chinese engineers, too wore white kameez shalwar in reverence to the local culture.

After the ceremony, the bride was taken to a nearby Chinese camp by her husband as he took her  ‘home’ in typical Pakistani wedding style.

Afterwards, the couple along with their colleagues posed for pictures.

Sain later thanked his colleagues and friends for making their wedding reception so memorable. He mentioned that it was their friend’s idea that they should have a Pakhtun-styled wedding ceremony.

Local residents said that such events would provide profound exposure to the Chinese workers living here in Pakistan and help them adapt to Pakistani culture.

The Chinese national said that such cultural activities will bring the two nations of Pakistan and China closer together. Sain added that he and his wife love Pakistan, its culture, and traditions.

People on social media too were overjoyed to hear the news and expressed good wishes for the couple.

Read more: Sana Javed, Feroze Khan to pair up for an ‘intense drama’…

A large number of commentators said that it will project a friendly image of Pakistan to the world. Also, foreigners engaging in cultural activities harmoniously in a region that has plagued by terrorism in the past points to the success of government efforts in bringing peace to the area.

ICJ has not taken a position against Pakistan on Yadhav: Yet!

Kashmir Conflict: The legacy of a Zionist agent