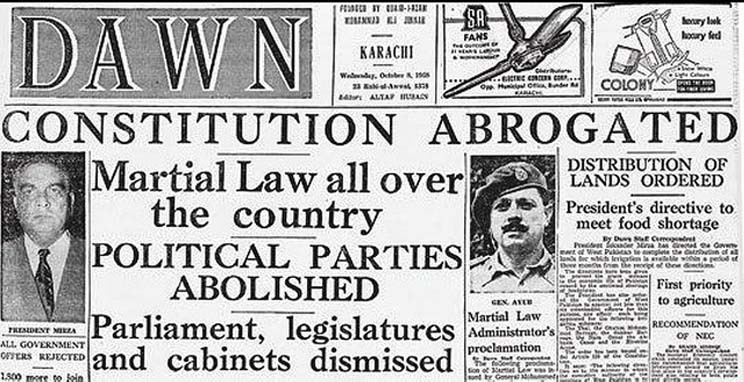 On April 10, 1973, an agreement was reached on the permanent Constitution of the Islamic Republic of Pakistan. Zulfiqar Ali Bhutto (ZAB) was the chief architect of this sacred document whose main features were: democratic, parliamentary, and federal (DPF). Despite the onslaughts and intrigues, this article has survived for 45 years. Dictators, usurpers, and their rogues have all done their best to manipulate this agreement between the rulers and the ruled.

When it comes to Constitution making, Pakistan has a very checkered history, mainly because of Establishment incursion in the democratic process.

The seventies were a tumultuous time for Pakistan. The first free and fair elections were held in 1970. Results shocked the establishment. Instead of a divided house, two major parties emerged. Awami League bagged 160 out of 162 East Pakistan National Assembly seats while Peoples Party won 81 out of 138 West Pakistan Constituencies. When the people’s mandate was overruled, a civil war started in the Eastern Wing and Quaid’s Pakistan was dismembered. The 1962 Constitution had been abrogated and the country was being run under a martial law ‘Legal Framework Order’ (LFO). ZAB assumed the power of what was left of the country, first as Martial Administrator under the LFO and then President after the promulgation of the 1972 interim Constitution.

Read more: Pakistan’s series of missteps which has left us in our current pathetic state

When it comes to Constitution making, Pakistan has a very checkered history, mainly because of Establishment incursion in the democratic process. The first version was prepared in 1956, nine years after independence. Before its complete implementation, it was abrogated in 1958, followed by a martial law. Then the second document was imposed in 1962 by the dictator. It introduced sham democracy run by the thana (Police Station).

The fall of the dictator paved the way for democracy and elections were held in 1970 on the basis of one man one vote. Will of the people prevailed and they were back in the system.

In 1967, ZAB revolted against the dictator. East Pakistan never accepted the Khaki rule. Suharwardy’s Awami League was now under the leadership of an ordinary worker Mujib-ur-Rehman, who wanted complete autonomy under a confederal arrangement. The fall of the dictator paved the way for democracy and elections were held in 1970 on the basis of one man one vote. Will of the people prevailed and they were back in the system.

In 1972, Yahya’s martial law was lifted to be replaced by an interim constitution. ZAB was elected President by the house. He initiated work on a permanent document. As the establishment was beaten and bruised, the comrades like Mahmood Ali Kasuri and Hafiz Pirzada had a free hand. After persistent efforts, the document was ready. ZAB sought complete consensus. The right wing parties were not comfortable with some of the clauses and there was a deadlock.

ZAB was not only removed from power, he was also physically eliminated through judicial murder on April 04, 1979. Once again the constitution came under attack.

In order to remove the impasse, ZAB got directly involved. There was a rumor in the University that he was meeting the Chief of Jamaat-e-Islami Maulana Maududi at their office in Zaildar Park Ichra. By the time the students reached there, ZAB had left after arriving at a compromise. Pakistan finally had a constitution that was agreed to by all the parties. There was a concurrent list of departments that had to be devolved to the provinces in ten years. Instead of the Martial Law and its Jungle Rule, the country was now under the constitutional rule of law in which the establishment was contained. Beaming with confidence, ZAB called for elections in 1977, one year ahead of the schedule.

While he wanted to surprise the opposition by snaps polls the establishment had already laid a trap for him. The moment assemblies were dissolved, a nine-party joint movement called Pakistan National Alliance (PNA) was announced to contest the elections on a unified platform under the symbol of ‘plough’ (Hal). Considering his popularity, ZAB allowed the political parties to contest against him as a joint opposition. The electives who had managed to get PPP tickets indulged in their old tricks and the entire electoral exercise in 1977 was disputed by the mischief of the few. A movement was launched to topple the democratic agreement. The establishment was back with a vengeance.

The United States Constitution that was enacted in 1787 is hailed as ‘Miracle of Philadelphia’. While it ensures freedom, it also allows progress.

ZAB was not only removed from power, he was also physically eliminated through judicial murder on April 04, 1979. Once again the constitution came under attack. The usurper openly expressed his disdain of the document saying, I can tear and trash it. He introduced his own brand of religion through illegal and unwanted amendments. His draconian amendments allowed dismissal of elected governments and denial of basic rights like education (Article 25-A). It was the darkest period (1977 to 1988) of history from which recovery has been very difficult.

Read more: What we need to do to ensure ‘free and fair’ elections in Pakistan?

The 1973 Constitution has saved the federation despite several unholy onslaughts by the Khaki dictators and their political rogues who ruled after them. The United States Constitution that was enacted in 1787 is hailed as ‘Miracle of Philadelphia’. While it ensures freedom, it also allows progress. Today the USA leads the world in technology and democracy and is the lone super power.

The 1973 document has to be restored to its original form, all martial amendments should be annulled to cleanse it. Amendments are fine but after a due process and open debate.

Pakistan is a constitutional democracy, largely due to the efforts of the truly elected assembly of 1970. As a nation, we must defend and protect our Constitution. The Lawyers Movement in 2007 was supported by the civil society for the rule of law. The 1973 document has to be restored to its original form, all martial amendments should be annulled to cleanse it. Amendments are fine but after a due process and open debate.

April 10, 1973, produced a miracle for Pakistan, a Constitution that is democratic, parliamentary and federal it is time to uphold, defend and follow it if progress is desired. The rulers and the ruled have to work in unison under an agreed framework. Sham elections and fake leaders cannot deliver. Dictators and their NRO’s have been disastrous for the country. Constitutional rule of law is the way forward as envisioned by the Quaids.

Dr. Farid Malik is a prominent technical and management expert in mining, materials, engineering and high-tech industry; he is a regular columnist for The Nation and Pakistan Today.He is ex-Chairman, Pakistan Science Foundation.  This article was first published in Pakistan Today and is republished with the permission of the author. The views expressed in this article are the author’s own and do not necessarily reflect Global Village Space’s editorial policy.