Faced with the possibility of becoming the third US president in history to be impeached, Trump has pushed back hard -- branding the probe the "single greatest witch hunt in American history" 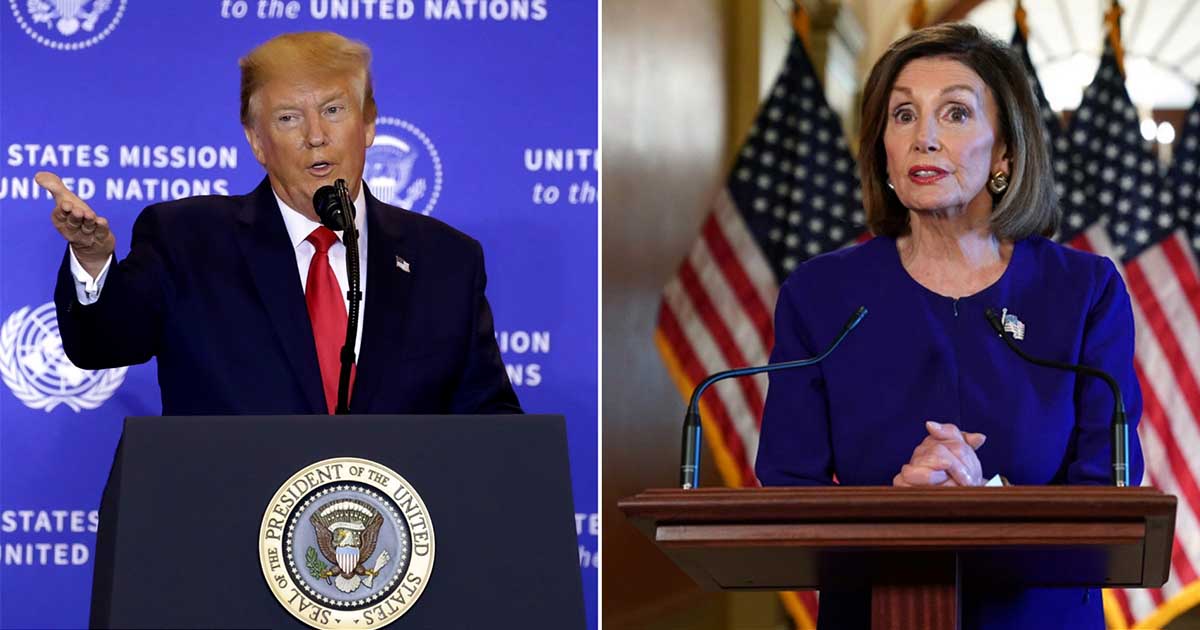 A downbeat Donald Trump on Wednesday dismissed as a “joke” the grounds laid out for the impeachment inquiry into him, as Democrats stood firm in accusing the US president of a “mafia-style shakedown” of his Ukrainian counterpart.

Trump denied claims he abused his office by repeatedly urging President Volodymyr Zelensky to probe his rival Joe Biden — as confirmed in a call transcript released by the White House.

President Trump: "The witch hunt continues, but they're getting hit hard on this witch hunt because when they look at the information it's a joke. Impeachment for that?!? When you have a wonderful meeting, or you have a wonderful phone conversation?" https://t.co/y1xuFketlS pic.twitter.com/ItG6EzT9YG— CSPAN (@cspan) September 25, 2019

The next explosive episode in the rapidly unfolding impeachment drama is set for Thursday, when acting director of national intelligence Joseph McGuire testifies on Capitol Hill.

The impeachment probe, House Speaker Nancy Pelosi said Trump’s actions amounted to a betrayal of his oath of office and of national security.

“They are getting hit hard on this witch hunt because when they look at the information, it’s a joke,” said the president, who struck an uncharacteristically subdued tone at his first news conference since Democrats launched an official impeachment inquiry.

A more defiant Trump had earlier insisted he exerted “no pressure” on Kiev — a claim echoed by Zelensky, who appeared side-by-side with the US leader at a long-planned meeting on the sidelines of the UN General Assembly.

But the publication of the transcript sent new shockwaves through Washington, including within the ranks of Trump’s Republican Party, with Senator Mitt Romney calling it “deeply troubling.”

Two competing narratives immediately took hold. Trump and his allies claimed the July 25 call contained no evidence of a quid pro quo pressuring Zelensky to probe the president’s top Democratic rival for the White House. Democrats meanwhile held it up as a smoking gun.

“This is how a mafia boss talks,” charged senior lawmaker Adam Schiff. “‘What have you done for us? We’ve done so much for you but there’s not much reciprocity. I have a favor to ask you.'” “And what is that favor? Of course, the favor is to investigate his political rival, to investigate the Bidens.”

The call summary — which is not a verbatim transcript — shows Trump saying US Attorney General Bill Barr and the president’s personal lawyer Rudy Giuliani would be in touch about probing the Ukraine-related activities of Biden and his son. In announcing the impeachment probe, House Speaker Nancy Pelosi said Trump’s actions amounted to a betrayal of his oath of office and of national security.

As Barack Obama’s vice president, Biden and other Western leaders pressured Ukraine to get rid of the country’s top prosecutor, Viktor Shokin, because he was seen as not tough enough on corruption.

“There’s a lot of talk about Biden’s son, that Biden stopped the prosecution and a lot of people want to find out about that so whatever you can do with the attorney general would be great,” Trump told Zelensky in the call.

“Biden went around bragging that he stopped the prosecution so if you can look into it… It sounds horrible to me.” The transcript did not show Trump explicitly tying aid to Ukraine to Zelensky probing Biden, which has fed the calls to impeach him.

But the two did discuss a major aid package, which had been frozen by Trump at the time and was only released in recent weeks. The memo also shows Trump asking Zelensky for a “favor” on an issue unconnected to Biden — just after noting that the US had been “very, very good to Ukraine.”

Analysts noted that the transcript uses ellipses — denoting words or entire passages are missing — on three occasions, all when Trump is making requests of Zelensky. Others pointed out that it was supposed to summarize a 30-minute call, yet the transcript runs to around just 12 minutes.

“There was no pressure whatsoever,” Trump told reporters earlier Wednesday, saying Democrats had built up the exchange as the “call from hell” but that “it turned out to be a nothing call.” Zelensky insisted meanwhile that he had not been “pushed” by Trump during the controversial call.

Faced with the possibility of becoming the third US president in history to be impeached, Trump has pushed back hard — branding the probe the “single greatest witch hunt in American history… a disgraceful thing.” Pelosi had for months resisted pressure from the party rank-and-file for impeachment, preferring to focus on next year’s election fight.

But on Tuesday, she relented, 11 days after news that an anonymous US intelligence official had filed a whistleblower complaint on Trump’s alleged double-dealing with Ukraine.

Democrats made clear the White House’s release of the call record would not satisfy their investigation into whether the US leader broke the law, and the complaint has now been reviewed by lawmakers.

Schumer later called in a statement for the contents of the complaint to be made public, saying: “The public has a right to read the whistleblower’s complaint for themselves.”