Trump says coronavirus is worse attack on the US than Pearl Harbor, 9/11

President Donald Trump has said that coronavirus is the worst attack on the US than either Pearl Harbor or 9/11. The Japanese assault on Pearl Harbor drew the United States to Wolrd War II. 9/11 triggered two decades of war and the incident killed about 3,000 people. Both these incidents look very small as compared to coronavirus where it has killed more than 260,000 -a quarter of them in the US. 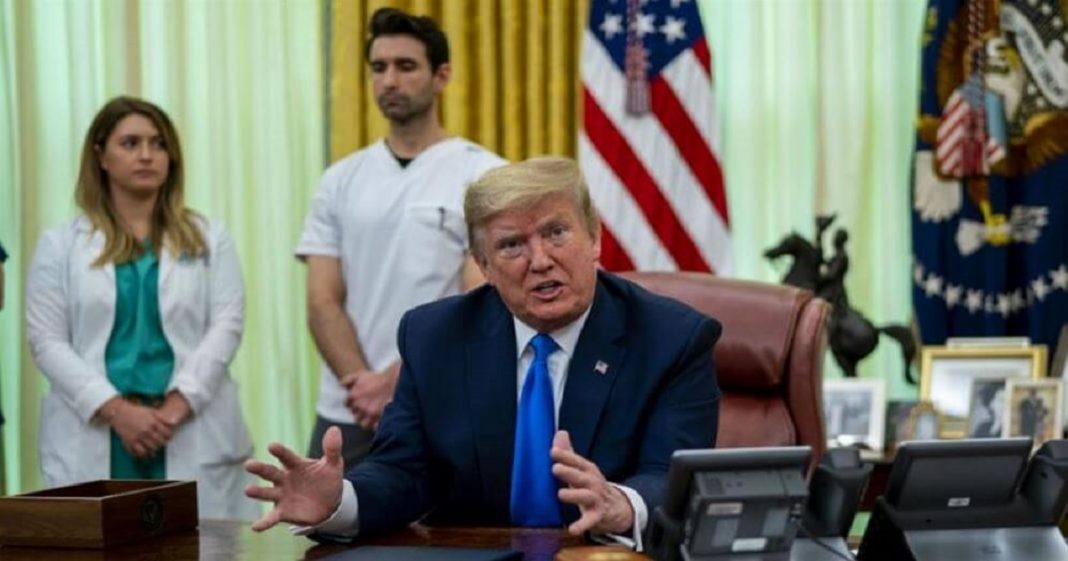 Donald Trump has said the coronavirus pandemic is a worse “attack” on the US than either Pearl Harbor or 9/11, taking aim once again at China, which he said should have stopped the disease in its tracks.
The president has ramped up his rhetoric against Beijing in recent weeks, as the death toll in the US has continued to climb, and as he agitates to re-open the shuttered — and stuttering — economy.

While some European and Asian nations have started easing lockdowns, experts have warned that despite the economic pain, social distancing measures remain necessary until a vaccine is developed.

Globally the virus has infected 3.7 million people and killed more than 260,000 — a quarter of them in the US.

In the Oval Office, U.S. President Donald Trump on Wednesday said that the COVID-19 pandemic has been the nation's "worst attack" ever, adding that the coronavirus outbreak "attack" is worse than 9/11 or Pearl Harbor.

“It should have never happened,” Trump said of the disease that emerged in the Chinese city of Wuhan last year.

The Japanese assault on the Pearl Harbor naval base in Hawaii was the worse attack on the US drew the United States into World War II.

September 11, 2001, jihadist attacks on that killed about 3,000 people and triggered two decades of war.

So far, more than 73,000 Americans have died of COVID-19, and Tom Frieden, former director of the Centers for Disease Control and Prevention, predicted the US toll could top 100,000 by the end of May. This may prove coronavirus to be the worse attack on the US.

“Until we have an effective vaccine, unless something unexpected happens, our viral enemy will be with us for many months or years,” Frieden told a congressional hearing.

The pandemic has hammered healthcare infrastructure in many parts of the United States, including New York City, and its impact has been particularly severe on the least privileged sections of American society, such as undocumented migrants.

Many of them are afraid of deportation, as well as the risk of racking up unpayable medical bills and hurting their quest to obtain legal status. As a result, many have contracted and died of COVID-19.

“He was very ill but did not want to go to the hospital,” Victoria, a Mexican nanny in New York City, said of her 69-year-old husband who had kidney problems and diabetes.

Read more: Death rate in the US could resemble a ”Pearl Harbor moment”: Health authorities

“After two weeks, when he could no longer walk or breathe, my daughter took the risk, loaded him into the car and drove him there. He died three weeks later.”

Across the Atlantic in Europe, the worst-hit continent, new coronavirus cases, and fatalities have seen a leveling off recently, and many nations have started easing the lockdowns.

Despite the good news on the medical front, the economic outlook remained grim as the European Union forecast a historic recession, with a staggering 7.7 percent contraction this year.

It's grim but we can measure coronavirus mortality and economic stagnation both in terms of body count, and that may ultimately be the criterion we use to judge when best to restart the economy. I hope it never comes to that and we manage to stave off total economic collapse.

Governments are attempting economic revival by slowly lifting restrictions but trying to avoid a devastating second wave of infections.

Germany has unveiled plans for a return to near-normality, including sending students back to school this month and shops resuming business, but Spanish lawmakers extended a state of emergency keeping lockdown measures in place for at least two more weeks.

In Britain, the nation with the second-highest number of deaths, Prime Minister Boris Johnson said some lockdown measures could be scaled back from next week, though he warned against moving too briskly.

“It would be an economic disaster for this country if we were to pursue a relaxation of these measures now in such a way as to trigger a second spike,” said Johnson, who was himself treated in hospital for the virus.

Experts in Australia, meanwhile, have warned that thousands of people are expected to take their own lives because of the financial and psychological stress of the crisis, far outstripping the death toll from the disease itself in the country.

The need for social distancing meant the global sports calendar was shredded by the pandemic, but with financial pressures mounting, the biggest leagues around the world are exploring ways to resume play.

The Bundesliga, Germany’s top football tier, on Wednesday became the highest-profile league to announce a resumption of matches, and could be a test case for restarts elsewhere.

Games will be played from May 15 — but without any spectators — after getting the green light from top authorities on the condition that strict health and hygiene guidelines are followed.

“We are particularly responsible for tens of thousands of jobs in diverse industries that live with, and through, football,” said Manuel Neuer, of Bundesliga giants Bayern Munich. “And we are responsible for all those fans for whom football is a big part of their lives.”

In the United States, David Beckham’s Inter Miami was one of four Major League Soccer sides returning to training, but with a raft of coronavirus measures in place.

Angela Merkel’s warning: Will the US & Europe grow apart under Trump?