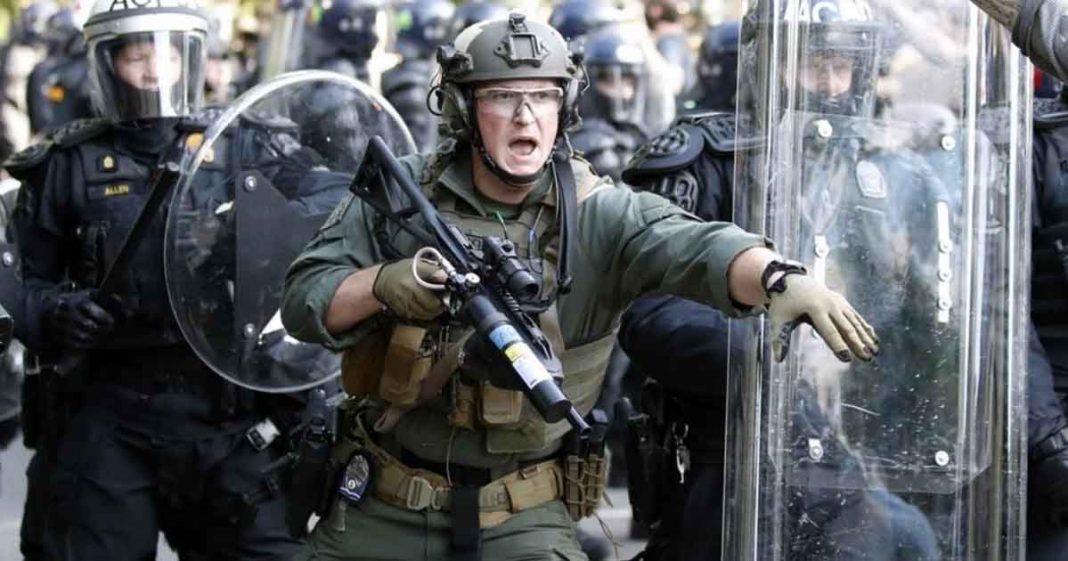 In news that has raised alarm bells across the United States of America, President Donald Trump threatened military mobilization in response to a once-in-a-generation violent protests gripping the United States, saying he was sending thousands of troops onto the streets of the capital and threatening to deploy soldiers to states unable to regain control. Earlier, the National Guard had also been deployed in cities to aid the operations of law enforcement, as hapless administrations across the country race to bring peace back to their states.

The dramatic escalation came a week after the death in Minneapolis of George Floyd, an unarmed black man who was killed when a white police officer knelt on his neck, leading to the worst civil unrest in decades in New York, Los Angeles and dozens of other American cities.

After being criticized for his silence on the worsening crisis, Trump struck a martial tone in a nationwide address from the White House garden, as police fired tear gas on peaceful protesters outside the fence.

“I am dispatching thousands and thousands of heavily armed soldiers, military personnel and law enforcement officers to stop the rioting, looting, vandalism, assaults and the wanton destruction of property,” Trump said.

“I am dispatching thousands and thousands of heavily armed soldiers, military personnel, and law enforcement officers to stop the rioting, looting, vandalism, assaults, and wanton destruction of property” in Washington DC. “Our 7 o’clock curfew will be strictly enforced”— Ryan Goodman (@rgoodlaw) June 1, 2020

He slammed the previous night’s unrest in Washington as a “total disgrace” and called on governors to “dominate the streets.”

“If a city or state refuses to take the actions that are necessary to defend the life and property of their residents, then I will deploy the United States military and quickly solve the problem for them,” he said, denouncing “acts of domestic terror.”

Despite the president’s rhetoric, Monday’s protests appeared largely peaceful in major cities, though some looting was reported in New York and Los Angeles.

Crack down on protestors outside the White House prompts backlash

During his address, however, law enforcement including military police used tear gas to clear protesters outside the White House so the president could walk across the street to the two-centuries-old St Johns church, hit with graffiti and partially damaged by fire during unrest on Sunday.

“We have a great country,” Trump declared as he stood before the church’s boarded up windows, held up a Bible and posed for photographs.

The backlash was swift.

“He tear-gassed peaceful protesters and fired rubber bullets. For a photo. For our children, for the very soul of our country, we must defeat him,” he said.

Washington’s Episcopalian bishop, Marian Budde, said she was “outraged” at the church visit, which she said Trump did not have permission for.

Thousands of people have participated in the nationwide demonstrations against police brutality and racism since Floyd’s killing.

It was the most widespread unrest in the United States since 1968, when cities went up in flames over the slaying of civil rights icon Martin Luther King Jr.

Many of the demonstrations have been peaceful and marked by moments of catharsis such as officers hugging tearful protesters and marching or kneeling alongside them.

How did the murder of George Floyd happen?

Others have seen rage-filled clashes between protesters and police, and widespread property damage. One person was shot dead in Louisville, Kentucky.

Floyd’s agonizing death was caught on bystander cell phone video that shows policeman Derek Chauvin pinning him down with his knee for nearly nine minutes, as the 46-year-old pleaded for his life with the haunting words: “I can’t breathe!”

“The evidence is consistent with mechanical asphyxia as the cause of death, and homicide as the manner of death,” Aleccia Wilson, a University of Michigan expert who examined his body at the family’s request, said.

Hennepin County’s medical examiner released its official autopsy calling the death a homicide caused by “neck compression,” although it had also said he was intoxicated and pointed to heart disease.

A memorial for Floyd will take place on Thursday in Minneapolis before his funeral in Houston, where he grew up, on June 9. But hundreds paid tribute in Minneapolis on Monday at the exact time he died one week prior, forming a large circle at the site of the killing where they chanted, knelt and prayed.

Floyd, 46, had been accused of trying to buy cigarettes with a counterfeit bill. The autopsy revived demands for the arrest of three other police officers who stood guard for Chauvin as Floyd lay dying.

Chauvin has been charged with third-degree murder and is due to appear in court June 8.

More than 40 cities have imposed curfews after consecutive nights of tension. More looting was taking place in New York Monday night, an AFP reporter saw, with stores including Best Buy and Nike damaged.

Mayor Bill de Blasio quickly announced a curfew for 8:00 pm on Tuesday in the city that never sleeps, three hours earlier than Monday’s.

In Los Angeles, where the National Guard were deployed at Hollywood landmarks such as the Dolby Theatre, some looting was also reported, though protests were largely peaceful. “Deep down inside us, we’ve had enough,” said 30-year-old Jessica Hubbert, a protester.

Trump spent most of the weekend inside the White House tweeting attacks on political rivals and the media. In a leaked conference call Monday, he told state governors they were “going to look like a bunch of jerks” if they were too soft.

The governor of Illinois, J.B. Pritzker, is heard saying he was “extraordinarily concerned” by the president’s “inflammatory” rhetoric.

Biden, for his part, met Monday with black leaders at a church in his home of Wilmington, Delaware and promised to form a police oversight commission in his first 100 days as president.

News Desk - 22 April 2021
The scheme is envisaged to reduce the physical examination of goods which is time-consuming and costlier besides causing port congestion. The program has been implemented initially at KICT, SAPT terminals of Karachi port, and at QICT, Port Qasim with effect from 19th April 2021