US President Trump signed the long awaited North American trade deal, USMCA, on Wednesday. Trump used to opportunity to tout his deliverance of a 'glorious future for America' in the face of the Democrats, charging forward in the impeachment trial against him. The deal, signed between US, Mexico and Canada, is part of Trump's 'America First' policy and will be one of the main weapons in Trump's re-election campaign arsenal. 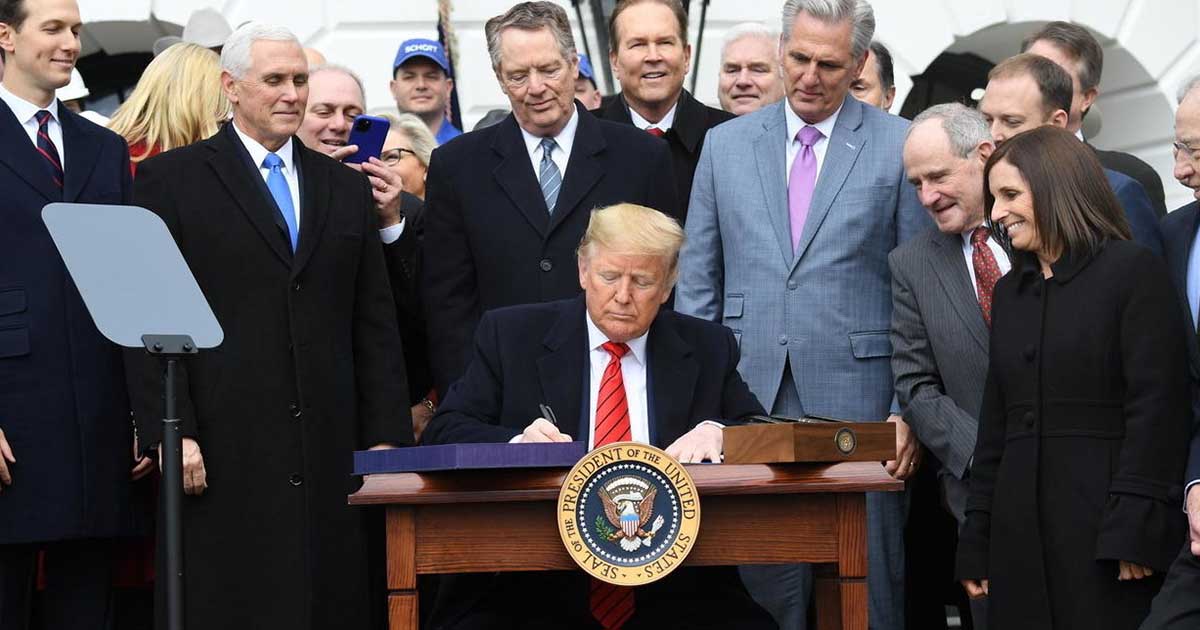 President Donald Trump on Wednesday signed his signature trade deal with Mexico and Canada into law, sealing a big bipartisan win for him during his heavily partisan impeachment trial.

On Tuesday he announced a Middle East peace plan — rejected immediately by the Palestinians — and earlier this month he signed a truce in his trade war with China.

Trump took the opportunity to shun the democrats – who are raging in the impeachment trial against him; no democratic leaders were invited to the signing ceremony even though ironically the deal is the result of close consultation between Trump’s Republicans and the Democrats.

Today, the US signed the #USMCA—a bipartisan act that will go down in history.

The USMCA replaces the 1994 North American Free Trade Agreement, or NAFTA, which Trump has long targeted, saying that it resulted in shipping US jobs abroad.

“Today, we are finally ending the NAFTA nightmare,” he said at the White House.

Analysts say USMCA retains many elements of NAFTA, a mammoth deal that created a free trade zone across all of North America, shaking up entire industries and supply chains.

Economists say that overall NAFTA increased growth and raised the standard of living in North America, binding the three countries in a complex web of trade rules and services.

But the new deal does change content rules on auto manufacturing, to boost US jobs, and requires higher salaries for some Mexican auto workers.

Mexico ratified the new agreement December 10, and Canada is expected to follow suit in coming weeks.

For Trump, the “colossal victory” of USMCA fits neatly into his “America first” campaign message ahead of a difficult November reelection fight and his current battle to see off impeachment over alleged abuse of power and obstruction of congress.

“Two decades of politicians ran for office vowing to replace NAFTA… yet when selected they never even tried,” he told government members, lawmakers, union representatives and selected workers assembled at the White House’s South Portico.

“I’m not like those other politicians — I guess in many ways,” he said. “I keep my promises.”

Under NAFTA, “we lost our jobs, we closed our factories and other countries built our cars. But we changed that,” he said. “The USMCA closed these terrible loopholes.”

US Trade Representative Robert Lighthizer, who led Washington’s negotiations both with USMCA and the recent truce in an even higher-stakes trade battle with China, called it a “great, historic agreement.”

NAFTA, he said, had been “highly controversial from the start” and many lawmakers subsequently “came to regret” their support.

And Trump’s son-in-law Jared Kushner, who is a senior advisor, said the president was wrong-footing his many critics with USMCA, the China deal and the Mideast plan.

“The people in Washington may not like it that he’s making them do work and he’s making things happen that people have spoken about for many years before but couldn’t deliver on,” Kushner said.

Why US created Afghan transit route?

US bullying tactics that increasingly mean nothing