Trump's Tulsa rally will brave the coronavirus, angry protesters and curfew to kick-start Trump's campaign for the Presidency in 2020. It is the President's first rally of the election season, and huge crowds are expected; however, fears of it becoming a super spreading event have been aired. 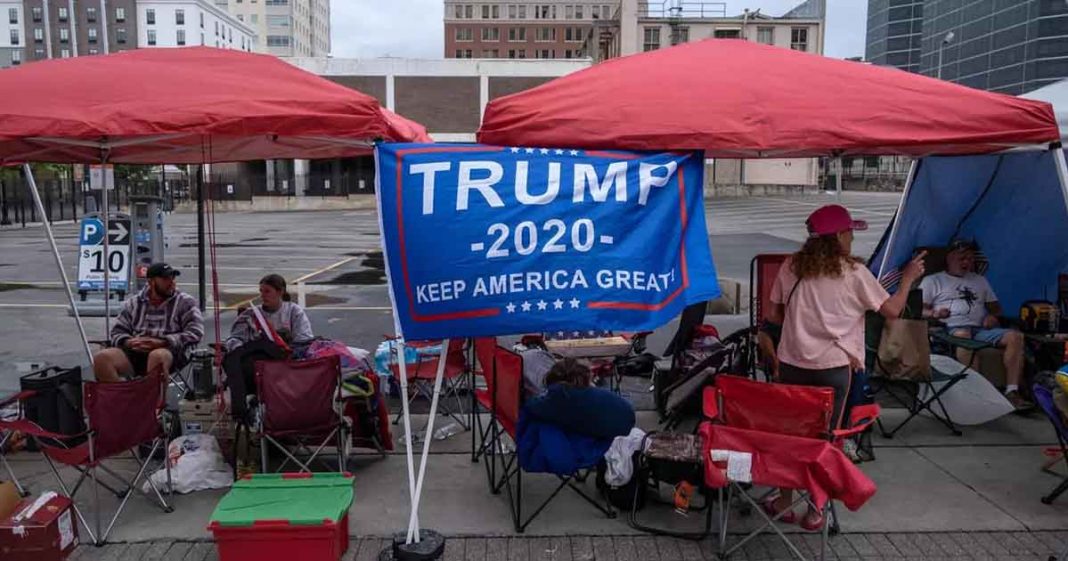 US President Donald Trump will defy the risk of triggering a coronavirus outbreak at his first reelection rally in months on Saturday, hoping the controversial Oklahoma event will instead reinvigorate his campaign. Trump’s Tulsa rally will brave the coronavirus, angry protesters and curfew to kick-start Trump’s campaign.

The stakes could not be higher — both for the health of the 19,000 people spending several hours at the indoor arena in Tulsa and Trump’s political fortunes five months before an election in which he is currently far behind in the polls.

“My campaign hasn’t started yet. It starts on Saturday night in Oklahoma!” the Republican tweeted Friday.

This will be the first of Trump’s signature rallies — formerly a regular event throughout his presidency — since March 2, when the country went into lockdown to try to curb the spread of the novel coronavirus.

The virus has since killed nearly 120,000 Americans and caused huge disruption to a once booming economy — which had been Trump’s strongest reelection selling point.

For Trump and his supporters — the “Make America Great Again” crowd that he hopes will turn out in big numbers to vote in key battleground states — Tulsa is now the place to show their strength.

“This is a super important moment for all of us,” said Stephen Corley, 19, who had been camping outside the arena since Tuesday to be sure he would get in.

“We all have a common purpose and a common goal here,” he said. “It’s a once in a lifetime opportunity.”

Trump’s Tulsa rally: in the reddest state of them all

Oklahoma is so overwhelmingly Republican that Trump’s job isn’t to win over the locals — it’s to revive his campaign, which has been rocked by unhappiness over his handling of the pandemic and weeks of racial tensions. Red is the colour of the Republican party, on whose platform Trump is campaigning for the Presidency. A red state is one which has more registered Republican voters.

Some of the flak, of course, comes from presidential challenger Joe Biden and other Democrats, but painful blows have also come from a handful of fellow Republicans expressing outrage at what they see as Trump’s refusal to unify the country.

US President Donald Trump will defy the risk of triggering a coronavirus outbreak at his first reelection rally in months, hoping the controversial Oklahoma event will instead reignite his misfiring campaign

The latest and most stinging critique came this week from former national security advisor John Bolton, ahead of the release of his book “The Room Where it Happened,” in which the ex-aide describes Trump as ignorant and corrupt.

With polls showing him far behind Biden, a man he disparages as “Sleepy Joe,” Trump is eager to change the narrative.

And rallies have long been his favorite political tool.

Coronavirus danger at its peak

But while Trump rolls the political dice, the crowd and what officials say could be tens of thousands of Trump supporters and anti-Trump protesters outside will be gambling with the risk of contracting the coronavirus.

On Friday, the state’s Supreme Court ruled against a lawsuit seeking to halt the rally over health concerns.

Read more: No more US lockdowns as coronavirus vaccine in sight

“We are confident that we can operate safely in Tulsa,” White House press secretary Kayleigh McEnany said.

Local infection rates are rising in Oklahoma. But she noted that the rally organizers will provide everyone with hand sanitizer, a temperature check and an optional mask.

“We’re confident that we can do this safely and we very much look forward to going to Oklahoma,” she said.

To attend, Trump supporters must sign a waiver, protecting the organizers from any responsibility.

Trump's rally in Tulsa is indoors, with no social distancing and no mask requirements—all in violation of CDC guidelines. Trump is willing to spread the COVID-19 virus in order to hear some cheers. He is a direct threat to the health of the American people. He must be defeated.

Democratic Senator Bernie Sanders accused Trump of being “willing to spread the COVID-19 virus in order to hear some cheers.”

Donald Trump: in denial over the coronavirus

Trump himself has been adamant about not being seen in a mask and for weeks has insisted that the virus is disappearing, allowing the economy to open back up.

Given his example, there may be many in the tightly-packed arena who decline to wear a mask, as recommended by government health agencies.

Jody, a Trump supporter who did not want to give her last name, lined up early with her five-year-old son Aaron, dressed to look like a mini-Trump.

She said she’d be one of those in a mask.

“We know six people that have been sick from COVID-19, so absolutely,” she said.

“I wish people would wear them, but you can’t force people to do something they don’t want to do.”