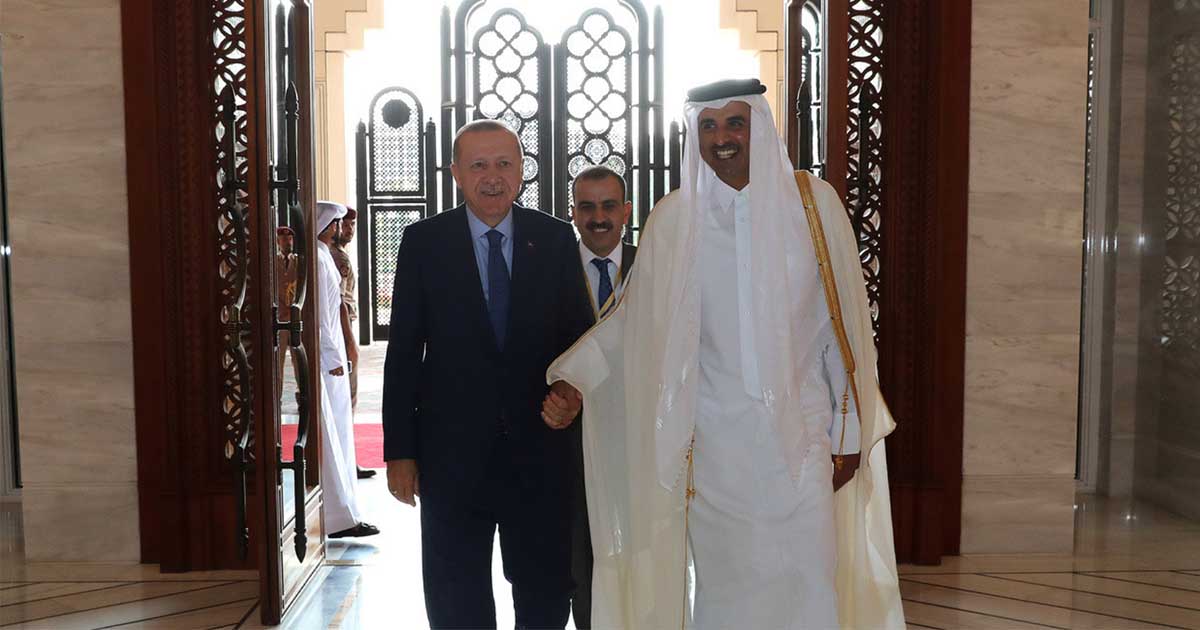 Turkish President Recep Tayyip Erdogan Monday said he hoped a dispute between a Saudi-led bloc and Qatar would “swiftly” come to an end amid emerging signs of a possible breakthrough in the Gulf crisis.

However, he ruled out the closure of a Turkish military camp in Qatar, part of the Riyadh-led bloc’s string of conditions to end the isolation of Doha.

“My wish is that the Gulf crisis will be swiftly resolved,” Erdogan said at the Turkish military base, where around 5,000 troops are stationed.

“Those who tell us to close down this base have yet to grasp the fact that Turkey was Qatar’s friend in difficult times,” Erdogan said.

“Throughout our history, we have never let our friends face threats and danger alone, that we cannot do,” he added.

Erdogan arrived Monday in Doha on his first official trip to an Arab country since Ankara’s forces intervened in northeast Syria last month against Kurdish fighters.

During the visit, Ankara and Doha signed a number of economic and trade accords and agreed on enhanced cooperation in projects linked to the 2022 World Cup which Qatar will host.

Ankara and Doha have grown closer since Saudi Arabia, the United Arab Emirates, Bahrain and Egypt cut ties with their former Gulf ally more than two years ago.

Erdogan’s visit comes at a critical time amid signs of a possible breakthrough in the crisis between Qatar and its neighbours — in what could be pushing Ankara to further bolster its political and economic relations with Doha.

A decision of football teams from the Saudi-led bloc to play at a tournament in Qatar was seen to bear messages of a rapprochement.

The Saudi and UAE squads arrived on Monday to compete in the Arabian Gulf tournament in Doha from November 26, despite their nations’ two-year boycott of Qatar. Bahrain also said it would take part.

The bitter rift between Qatar and the Saudi-led bloc came over accusations that Qatar supports extremist groups and wants closer links with Iran, the arch-rival of regional powerhouse Saudi Arabia.

Erdogan’s visit to Qatar was the third trip since the Saudi-led blockade began in June 2017, which led to rising Turkish influence in Doha.

Doha declared its support for Ankara after it launched an offensive on October 9 against a Syrian Kurdish militia, but Arab countries including Saudi Arabia and Egypt have condemned Turkey’s “aggression”.

Andreas Krieg, a professor at King’s College London, said the Qataris were put in a “tough situation” when Turkey launched its operation against Syrian Kurdish forces, considered by Ankara to be “terrorists”.

“They acknowledged Turkey’s right to defend itself while disagreeing about the means and ways used by Ankara in pursuit of this objective,” he told AFP.

“There has been a lot of rumours about this potential disagreement following Qatar-critical coverage in the Turkish press, but in reality there has been no rift in this relationship between Doha and Ankara.”

After the Gulf crisis erupted, Turkey was at the forefront of nations supplying Qatar with food and services, bypassing the blockade imposed by the Saudi-led nations.

Qatar last year announced a $15-billion loan to Turkey’s fragile banking sector and also gave a luxury jumbo jet — reportedly worth around $400 million — as a “gift” to Ankara.

The two nations have similar policies over Islamist groups, primarily the Muslim Brotherhood.

Turkey’s relations with both Egypt and Saudi Arabia are rocky, and ties between Riyadh and Ankara worsened significantly after Washington Post contributor and regime critic Jamal Khashoggi was murdered in the Saudi consulate in Istanbul on October 2, 2018.

Cinzia Bianco, Gulf Research Fellow at the European Council on Foreign Relations, said Erdogan’s visit was “key” at this time.

“Erdogan is trying to make sure that a rumoured Gulf appeasement won’t come at the expense of Qatar-Turkey relations,” she told AFP.

If Modi wages war against Pakistan, it will be last war: Sheikh Rashid

Qualcomm to see at least $4.5 bn from Apple settlement