Famous singer Della Miles has given her vocals to the song. The song is titled ‘Kashmir is my Name’. The video of the song features the atrocities of Indian security forces in India. 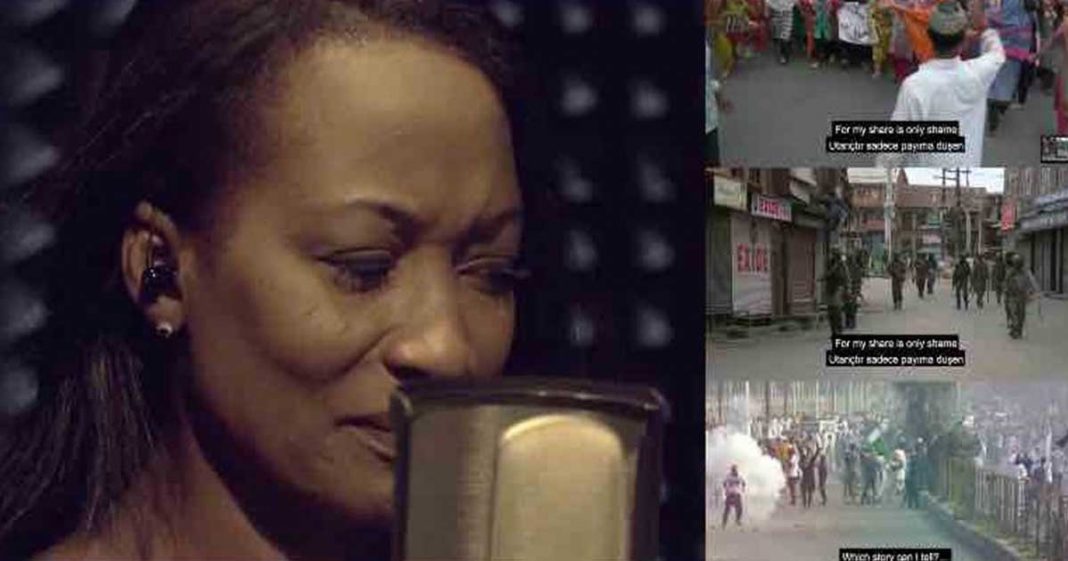 A Turkish lyricist has composed a song dedicated to Kashmir. Turkey released the song globally yesterday. Istanbul-based lyricist, Turgay Even has penned down the lyrics of the song. The song is dedicated to all the people of the Kashmir.

Famous singer Della Miles has given her vocals to the song. The song is titled ‘Kashmir is my Name’. The video of the song features the atrocities of Indian security forces in India.

Turkey has been voicing support for the liberation of Kashmir since last year when India annexed Jammu Kashmir in August 2019. Turkey was among the few countries that joined the call of Pakistan for the freedom of Kashmir. The song reflect the support of the nation of Turkey for the Kashmir cause.

A song composed by Turkish lyricist dedicated to Kashmir released globally today. Turgay Evren Istanbul based poet said the song is “dedicated to all oppressed people of the https://t.co/RYZnzIFCrh famous Della Miles has given her melodious voice to song @AsimSBajwa@shiblifaraz pic.twitter.com/WFntaIAYSP— Information Ministry (@MoIB_Official) June 10, 2020

Moreover, the Turkish lyricist received praised on social media for penning down a soulful song on the Kashmir issue.

On several occasions, Turkey has vociferously supported Pakistan’s call for the peaceful resolution of the Kashmir issue. Moreover, Turkey believes the conflict of Kashmir is not the internal matter of India.

In his address at the UN General Assembly session in New York, President Erdogan criticized the international community for failing to pay attention to the Kashmir conflict, which awaits a solution for 72 years.

#Kashmir “Kashmir Is My Name”!…This song, written by me and performed by Della Miles, the world famous American singer known as Michael Jackson’s and Whitney Houston’s vocalist, goes to all oppressed people of the world, deprived of freedom and justice. https://t.co/N8Bisud5VC— Turgay Evren (@TurgayEvren1) June 10, 2020

The president said the stability and prosperity of South Asia is related to the freedom of Kashmir.

Read more: Erdogan calls for Kashmir Solution based on justice and equity

“For the Kashmiri people to look at a safe future together with their Pakistani and Indian neighbors, it is imperative to solve the problem through dialogue and based on justice and equity, but not through collision,” said Erdogan.

The India-administered region has been facing a clampdown since Aug. 5, when the Indian government nixed Article 370 of the Indian constitution, which conferred a special status on it.

Turkey has repeatedly argued that Kashmir is not an internal matter of India.

The speakers added that India’s Aug. 5 move to unilaterally scrap the special provisions of the disputed region is a potential trigger to cause instability in South Asia.

The provisions allowed Jammu and Kashmir to enact its laws and protected the region’s citizenship law. Also, it barred outsiders from settling in or owning land in the territory.

Turkey’s ruling Justice and Development (AK) Party lawmaker Muhammet Amin Abasoglu said the hopes and wishes of Kashmiris are integral to any solution.

“1972 Shimla Agreement created a status quo and both – India and Pakistan – should fulfill conditions of this agreement,” he said, noting that the pact bound both parties to resolve the dispute through negotiations.

Back in 2017, Prime Minister Narendra Modi rejected the offer of Turkey to mediate the talk on the Kashmir issue between India and Pakistan.

My duty as a human being and a muslim. 🤲

New Delhi’s statement while turning down the offer was that the Kashmir issue is a bilateral matter, for which India is ready to hold talks. Also, India asserted stressed that cross-border terrorism is the primary problem between the two countries. Hence, India turned down the offer of Turkey to play the role of a peacemaker between the two neighbors.

India faces diplomatic isolation on citizenship law – a taste of its own medicine?

Has coronavirus brought about the end of Indian cinema?

Is the Muslim Brotherhood a Terrorist Organization?