Accounts of prominent personalities were hacked on Twitter and pushed to their followers a bitcoin scam in one of the largest coordinated attacks on Twitter. Taking the world, and Twitter by surprise, hackers posted bitcoin chains asking for people to transfer cryptocurrency to them, promising to double them. Twitter has been left red-faced by the scandal.

Twitter is investigating a massive hack in which high-profile users from Elon Musk to Joe Biden had their accounts hijacked by scammers who the social network believes targeted its employees to gain access to internal systems. Many high profile twitter accounts of prominent personalities were hacked by the scam.

Posts trying to dupe people into sending hackers the cryptocurrency Bitcoin were tweeted by the official accounts of Apple, Uber, Kanye West, Bill Gates, Barack Obama and many others on Wednesday.

“We detected what we believe to be a coordinated social engineering attack by people who successfully targeted some of our employees with access to internal systems and tools,” Twitter said.

“They used this access to take control of many highly-visible… accounts,” the company said, adding that it was investigating “what other malicious activity they may have conducted or information they may have accessed.”

The fraudulent posts, which were largely deleted, said people had 30 minutes to send $1,000 in bitcoin in order to receive twice as much in return.

Read more: Parler: is this the alternative to Twitter’s ‘free speech’?

A total of 12.58 bitcoin — worth almost $116,000 — were sent to the email addresses mentioned in the fraudulent tweets, according to the site Blockchain.com, which monitors crypto transactions.

There are govt backdoors with god mode (full editing power for every account and every message).

Evidence from email, smart phones, social media is no longer reliable in Court because it can be edited.

Backdoors can be abused, as seen today.

“We all feel terrible this happened. We’re diagnosing and will share everything we can when we have a more complete understanding of exactly what happened.”

US President Donald Trump’s account, which has more than 83 million followers, was not among those hacked.

“Most accounts should be able to Tweet again,” the Twitter support team said in an evening update, having earlier briefly disabled posts from verified accounts with an official blue checkmark.

The network said it had locked down the affected accounts, which also included Bitcoin speciality firms, and removed the tweets posted by the hackers.

Twitter added that the network was largely back to normal, but that it “may take further actions and will update you if we do.”

Media outlet Vice reported that a Twitter insider was responsible, citing leaked screenshots and two anonymous sources apparently behind the hack, one of whom told Vice they had paid the employee.

What is the scam?

The tweet that appeared on Tesla founder Musk’s Twitter feed said, “Happy Wednesday! I am giving back Bitcoin to all of my followers. I am doubling all payments sent to the Bitcoin address below. You send 0.1 BTC, I send 0.2 BTC back!”

It added that the offer was “only going on for 30 minutes.”

The fake messages that appeared on other famous accounts made similar promises of instant riches.

One version of the scam invited people to click on a link at which they would be exploited. 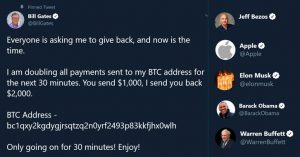 “This is a SCAM, DO NOT participate!” he warned.

Twitter has been targeted by hackers in the past.

In March 2017, the accounts of Amnesty International, the French economics ministry and the BBC’s North America service were broken into by hackers believed to have been loyal to Turkish President Recep Tayyip Erdogan.

Last August, a series of insulting or racist messages were posted on the personal account of Twitter founder Dorsey without his knowledge.

Previous article
A bouncy journey for Pakistan: 1947-2020 (Part 1)
Next article
Is Justice Faez Isa being targeted under a new plan?