At least two people have died and 100 homes have been destroyed as an unprecedented number of bushfires tore through eastern Australia Saturday. 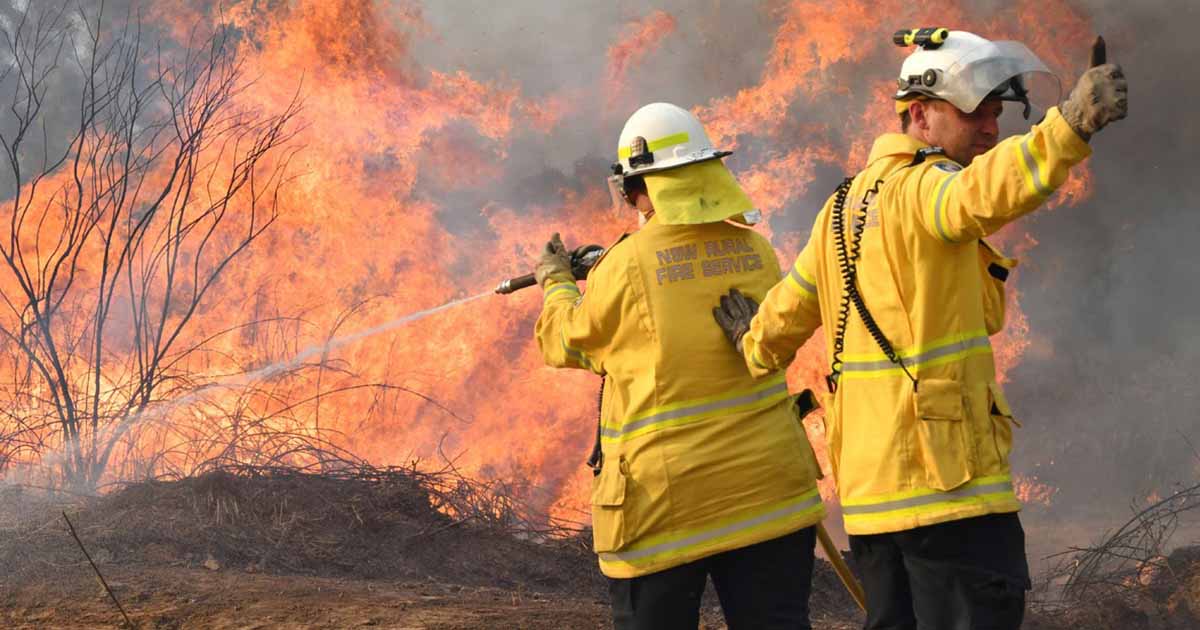 At least two people have died and 100 homes have been destroyed as an unprecedented number of bushfires tore through eastern Australia Saturday.

New South Wales premier Gladys Berejiklian also said seven people were unaccounted for, as firefighters tried to contain dozens of out-of-control blazes that have raged in the state since Friday.

There are 90 #bushfires burning across NSW, with homes in NSW and Queensland under threat from huge fires on Australia's east coast. This was Port Macquarie on Friday afternoon. Follow updates in our live blog https://t.co/jcqltVmJDA

“I’m sorry to say that number can increase during the day,” she said of the death toll, adding that despite some respite Saturday, next week’s weather forecast “could mean we’re not through the worst of it.”

Emergency services said they had found the remains of one person in a car and another woman died despite medics struggling for several hours to save her.

Read more: Why are California’s wildfires different this year?

“At this stage, it appears at least 100 homes have been destroyed in yesterday’s bush fires,” the fire service said in an update early Saturday.

More than 30 people have been injured, most of them firefighters.

“I’m getting regular updates and we stand ready to offer any assistance needed,” he tweeted.

Firefighters had warned they were in “uncharted territory” as they deployed 1,200 firefighters and 70 aircraft across a roughly 1,000-kilometre (620-mile) stretch of the seaboard.

Bushfires are common in Australia and a vast corps of firefighters had already been tackling sporadic blazes for months in the lead-up to the southern hemisphere summer.

But this is a dramatic start to what scientists predict will be a tough fire season ahead — with climate change and unfavourable weather cycles helping create a tinderbox of strong winds, low humidity and high temperatures.

While conditions eased markedly in some areas and the forecast was downgraded from “extreme” to “high” or “very high” Saturday, a total fire ban remained in place in many areas and further high winds were predicted.

We Can’t Get to Everyone

Firefighters had described the conditions Friday as “difficult” and “dangerous”.

“Unfortunately, many people have called for help but due to the size and speed of the fires we couldn’t get to everyone, even by road or helicopter,” New South Wales firefighters said.

Smoke from the #NSW and #QLD fires can be seen spilling over the Tasman Sea. Latest imagery at https://t.co/DO9KX5WTyA pic.twitter.com/Jw1CqkrDu9

In some areas, residents were stuck and told to simply “seek shelter as it is too late to leave”.

Local radio stopped normal programming and provided instructions about how to try to survive fires if trapped at home or in a vehicle.

Across the central coast smoke could be seen billowing high into the sky and residents took to social media to post photos and videos of smoke-laden tangerine skies and flames engulfing storeys-tall eucalypts within sight of their homes.

Authorities said some of the fires were creating their own weather conditions — pyrocumulus clouds that enveloped entire towns.

Meanwhile, high winds flung embers and burnt debris far ahead of the fires’ front lines, depositing the dangerous detritus on the balconies and front yards of unsuspecting residents.

Despite easing conditions, a prolonged drought and low humidity levels will continue to make circumstances combustible.

Earlier this month some of the same fires cloaked Sydney in hazardous smoke for days, giving the city a higher concentration of particles per million than cities like Bangkok, Jakarta or Hong Kong.

Swathes of Australia have gone months without adequate rainfall, forcing farmers to truck in water at exorbitant cost, sell off livestock or leave their land to lay fallow.

On Wednesday, Morrison’s climate-sceptic government announced a package of low-cost loans worth around one billion Australian dollars (US$690 million), designed to help drought-stricken farmers struggling with the latest “big dry”.

Previous articleUS wants UN to take up Dalai Lama succession: envoy
Next articleFacebook says it is sorry for being racist

30 July 2021
Previous articleUS wants UN to take up Dalai Lama succession: envoy
Next articleFacebook says it is sorry for being racist

65 journalists & media workers killed all over the world in 2017