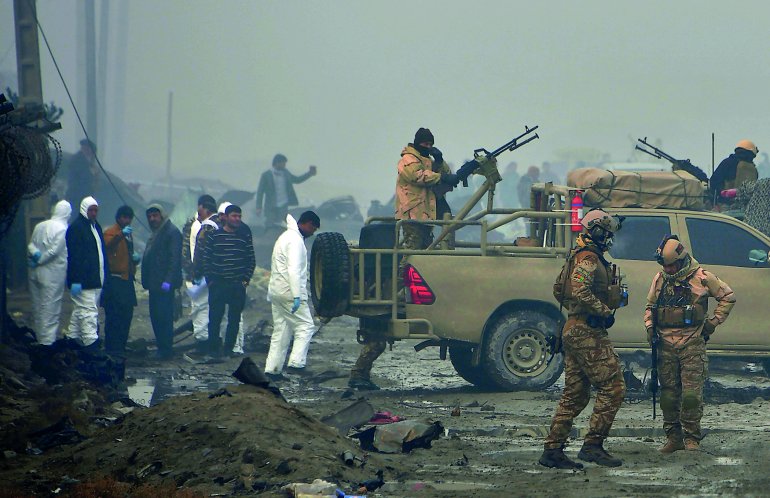 British security firm G4S said Thursday that five of its employees were among at least 10 people killed in a Taliban-claimed attack on one of its compounds in Kabul.

A massive crater marked the spot where the militants detonated a vehicle bomb outside the compound late Wednesday before trying to fight their way inside in the latest violence to rock the Afghan capital.

G4S, which provides security for British diplomats, said one Briton and four Afghans were killed in the attack. Earlier, Afghan authorities had said at least 10 people had been killed in the attack, but it was not immediately clear if that toll included the G4S employees.

The Afghan government, Western diplomats and UN officials have in recent weeks raised hopes of finally reaching a deal to end the 17-year war.

“It is with great sadness that we can confirm that five of our employees were killed and 32 were injured, five of them seriously,” managing director Charlie Burbridge said in a statement.

“We are committed to our security role in support of the people of Afghanistan, and we are determined that incidents such as this will not prevent the vital work that the international community conducts from continuing,” he said.

Afghan interior ministry spokesman Najib Danish told AFP earlier that 10 people were killed in the attack — all of them Afghan nationals. But police spokesman Abdul Basir Mujahid said authorities were still working to identify the nationalities of the victims.

“Five attackers were involved, one detonated his vehicle at the gate, and four others were on foot and they entered the building,” Danish told AFP. An AFP photographer Thursday could see the shattered remains of a small van lying in the middle of the debris. Parts of nearby buildings in the industrial area of eastern Kabul were twisted by the violence of the blast.

British security firm G4S said Thursday that five of its employees were among at least 10 people killed in a Taliban-claimed attack on one of its compounds in Kabul.

One survivor, Abdul Mohammad, told AFP he and his nephew had just passed the compound when the bomb detonated. “I lost consciousness but regained it in a few minutes,” he told AFP from his hospital bed. “I felt a lot of debris hitting us. I tried to pick my nephew up but couldn’t do it… I realised he was dead.”

Besmullah Taban, police chief for the district in which the attack happened, said that when security forces entered the compound they found 230 people hiding in its safe room, including 36 Afghans, adding they were all rescued.

G4S, which according to its website provides security for British diplomats in Kabul, was also targeted in an attack in March, when a suicide bomber detonated his explosives before reaching the entrance of the complex.

Two civilians were killed in that attack. Wednesday’s assault came hours after Afghan President Ashraf Ghani announced the formation of a team for prospective peace talks with the Taliban, as the United Nations renewed calls for direct negotiations between Kabul and the insurgents.

“Five attackers were involved, one detonated his vehicle at the gate, and four others were on foot and they entered the building,” Danish told AFP.

The Afghan government, Western diplomats and UN officials have in recent weeks raised hopes of finally reaching a deal to end the 17-year war.

Read more: Reactions and repercussions of the Kabul attack

Such optimism has been tempered by continuing attacks, including the killing of three US soldiers earlier this week when an improvised explosive device detonated in the southeastern province of Ghazni.

At an international conference on Afghanistan in Geneva, Ghani said the 12-person negotiating team includes both men and women and will be led by his chief of staff Abdul Salam Rahimi. But the Taliban have once again rejected Ghani’s overtures, saying in a statement Thursday that it considered the government in Kabul “impotent” and a “waste of time”.